Digging in the dirt 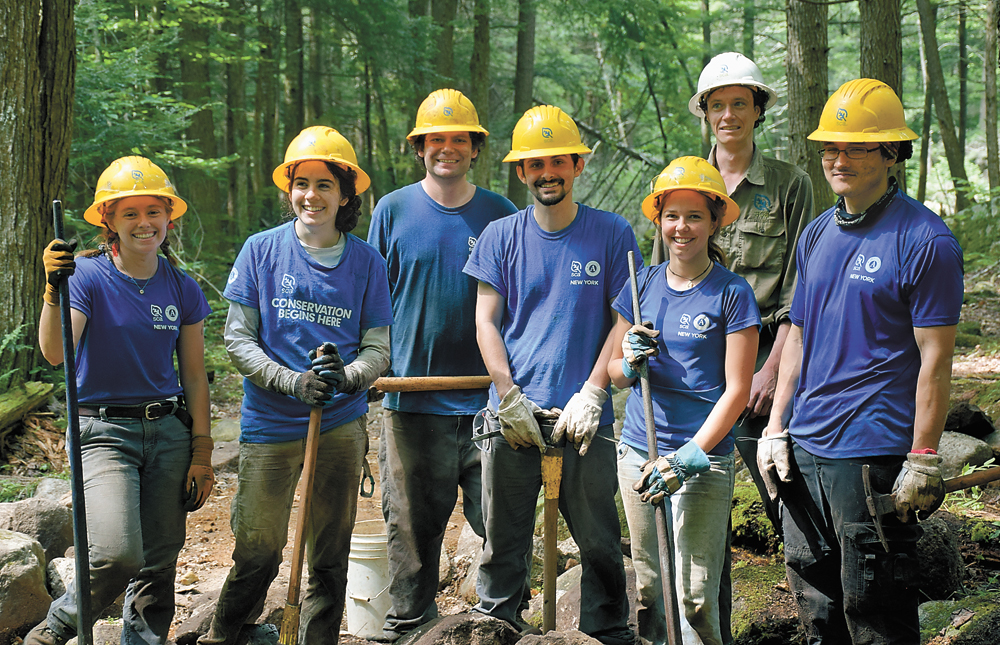 BRANT LAKE — People who live in cities like Washington, Los Angeles and New York spend an average of about an hour traveling to and from work each day. That commute can cause stress and anxiety, while taking folks away from their friends and family.

But in the Adirondacks, where commutes can also be long, one group has found that simply living — or in this case camping — at work not only eliminates a commute but also fosters team building. Even if the team sometimes gets sick of eating the same thing over and over.

The Student Conservation Association turned 60 last year, and 2018 marks the 20th year the group has been working in the Adirondacks. While there are three crews working inside the Blue Line this summer, those crews usually only spend a week or two on each project, meaning that the roughly 20 young adults move around to complete projects all over the park. 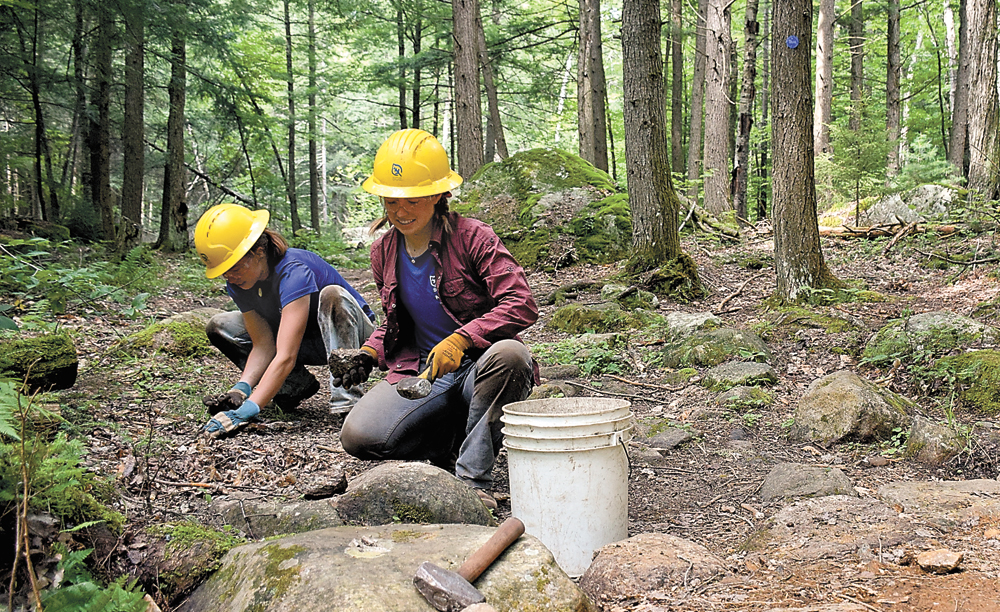 Hannah Fake, left, and Dana O’Malley pick rocks out of the trail during work on the Pharoah Lake trail Tuesday. (Enterprise photo — Justin A. Levine)

Around the country, “members” are doing conservation work basically for free. The SCA offers a weekly stipend and provides food and shelter for the summer, when most of the work occurs. Workers are also eligible for education grants that can help pay for college or student loans, as the SCA partners with the federal AmeriCorps program.

The SCA was founded by Elizabeth Titus Putnam after she visited a national park in the 1950s and noticed that a combination of increasing numbers of visitors and a lack of funding were leading to environmental degradation. Putnam fleshed out the plan in her senior college thesis and approached the head of Olympic National Park, who readily agreed to host a trial team. The SCA primarily did trail work but quickly branched out into conservation programs and biological studies.

Since its founding, the SCA says that 70 percent of alumni go on to work in the environmental field with more than 10,000 people putting in 1.5 million hours of labor just in 2017. Nationwide, the SCA improved 3,000 miles of trails last year. 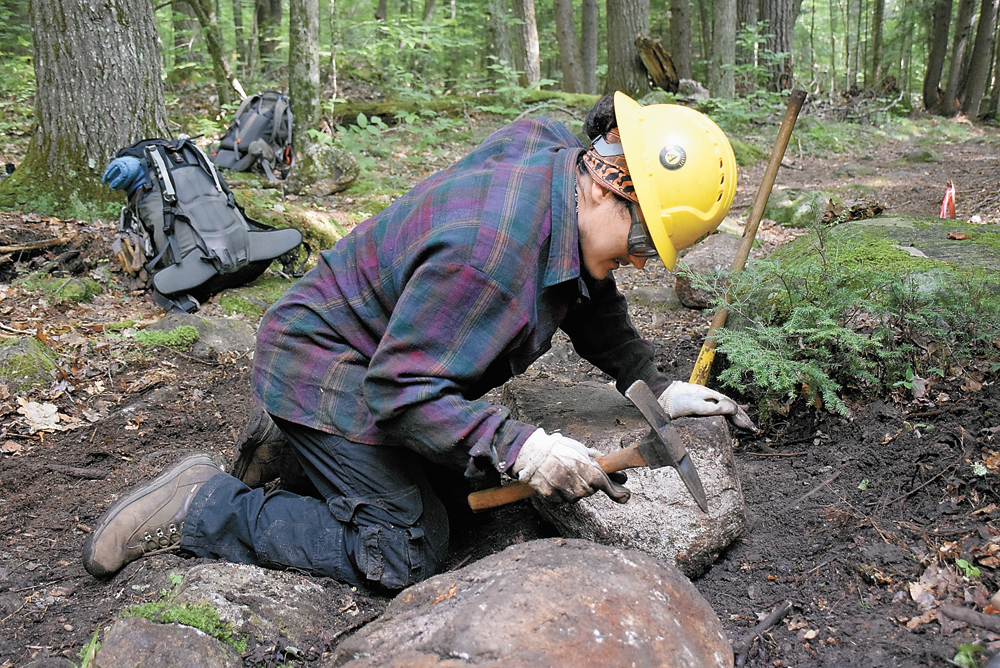 In the Adirondacks, the SCA crews are based out of the state Department of Environmental Conservation’s Whitney Headquarters south of Tupper Lake. But that’s just where training happens in the beginning of the season and where crews take short breaks between work stints. Once work commences, the SCA workers are largely based out of tents near where they’re working.

Workers put in either five- or 10-day hitches in the backcountry, with a crew of six or seven living, eating and working together. The program runs from late May through October each year.

According to SCA’s Adirondack Corps report from 2017, members improved more than 21 miles of trails, while also constructing more than 7 miles of new trail. They also built a lean-to, installed 40 sets of stone stairs and water bars, and removed more than 400 blowdowns.

SCA crews also replaced about 200 feet of suspension bridge in Avalanche Pass in the High Peaks (the Hitch-up-Matildas), built and put into place 50 small bridges and repainted the Azure Mountain fire tower, which turns 100 years old this summer. They also removed invasive plants from 35 acres of state land.

The SCA Adirondack crews work closely with DEC foresters to determine priority tasks with an emphasis on long-lasting projects. 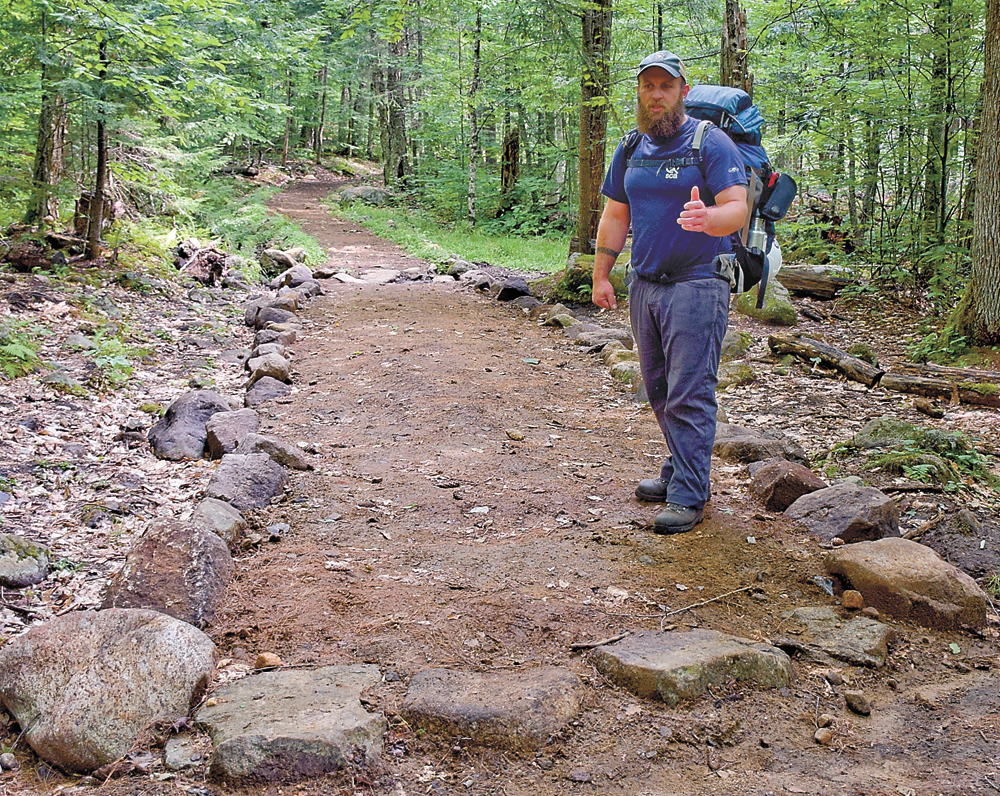 But before any of this work can be completed, members — as the workers are known — must complete a bevy of training, from advanced wilderness first-aid to chainsaw use, safe driving and Leave No Trace principles.

Jeremy Burns looks like a guy who knows how to do trail work. With heavy-duty logging boots and a beard that reaches halfway down his chest, the huge backpack he carries merely provides confirmation of his time in the woods.

Burns, the SCA’s Adirondack Corps director, has worked on SCA crews around the country for almost 20 years.

During a visit to one crew in the Pharaoh Lake Wilderness, he elicited sighs when he announced he had brought no food with him.

But despite the lack of calorie-dense treats, the crew was plugging along on what’s called a turnpike — a hardening of sections of trail that are often wet. This particular site was on the Pharoah Lake trail off of Beaver Pond Road, just north of Brant Lake.

Members are most often college students or recent graduates, and virtually all of them met for the first time when they gathered at the Whitney headquarters for training this spring. Once training is done, the recent strangers become close-quarter tent mates.

“There are definitely challenging parts,” Hannah Fake said in between moving large rocks. “When it rains for four days straight (and) everything’s wet and you’re never dry and you’re head to toe in mud with no shower at the end of the day, it definitely gets challenging. But I think overall, everyone has done a really good job managing it.

“You always know you get out after five days or 10 days,” she laughed. “You’ll go back to a bed and a hot shower.”

Fake, who hails from Maine and graduated from St. Lawrence University this spring with a conservation biology degree, said meal time is a favorite part of the day, despite an admitted monotony of food.

“I think we do a really good job for what we have in the backcountry,” she said. “We really spice it up and make sure everyone likes it. You do have to get creative.”

Although the crew was obviously upbeat and enjoying their work and camaraderie, Fake said there are times when morale can get a little lower.

“Working in the rain is not super fun,” she said. “When you’re trying to dig a hole for a rock and water is constantly filling it and you can’t see where to dig, that gets frustrating. But for the most part, I really like every part of it.”

Chris Schmidt is in the Adirondacks for the first time, having finished college earlier this year. The University of Wisconsin grad said he was looking to get his hands dirty after spending five years in college.

“I think Jeremy said in the interview that ‘It takes a special kind of person to want to go out and break your back for pennies,'” Schmidt said. “This is my first time out east. It’s very buggy, it’s very humid, but it’s very beautiful.

“It’s mind boggling that we could drive for two hours and still be in the park.”

Schmidt and Fake each said meeting new people was one of the highlights so far.

“It’s just such a diverse group of people, but it’s really nice to meet similarly minded people at the same time,” he said. “A lot of times at college, everyone seemed kind of ‘samey.’ We have a lot of the same values but come from a lot of diverse backgrounds.

“After five years of stress and studying, it’s just nice to use my body for a change.”

Schmidt is the group’s acknowledged gourmet, and said his least favorite part of the job is the lack of diversity in their grub.

“The food gets me,” he said. “I really like cooking. I’m probably high-maintenance. Eating rice and beans every day wears on me, but that’s part of the experience.”

But Schmidt also added that there have been some surprising upsides to the work as well.

“One thing that I didn’t think about beforehand is when people walk past the work you’re doing and they strike up a conversation with you; for a lot of people this is their favorite trail,” he said. “A bunch of people have said, ‘I’ve been hiking this trail for 20 years, and I’ve never seen the trail look this good,’