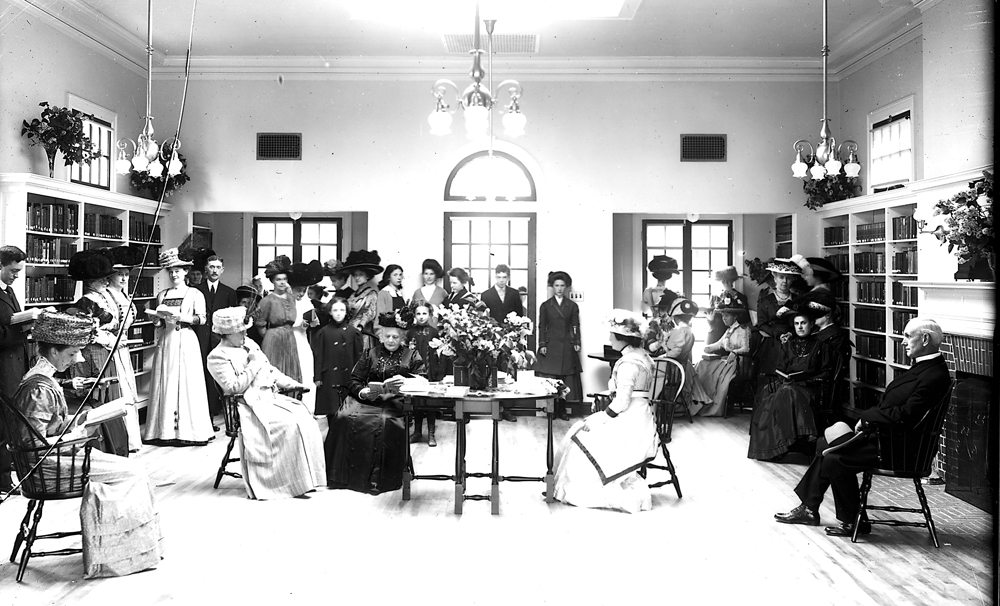 The Ladies’ Auxiliary Board of the Saranac Lake Free Library is seen at a reception. This photograph was first published in the Adirondack Daily Enterprise on July 10, 1910. (Photograph #85.15K, courtesy of the Adirondack Collection, SLFL)

Happy 110th birthday, Saranac Lake Free Library! While the library’s charter was granted in 1907, there were fledgling libraries that preceded the library on Main Street. A glance backward shows growth in both the physical library and the collection which has expanded from 400 books to a collection of 53,749 circulating books, magazines, CDs and DVDs; access to Ebooks; and our jewel, the Adirondack Collection which includes more than 66,967 items.

Today the library also offers an extensive interlibrary loan service and computer access that our founders could never have imagined. 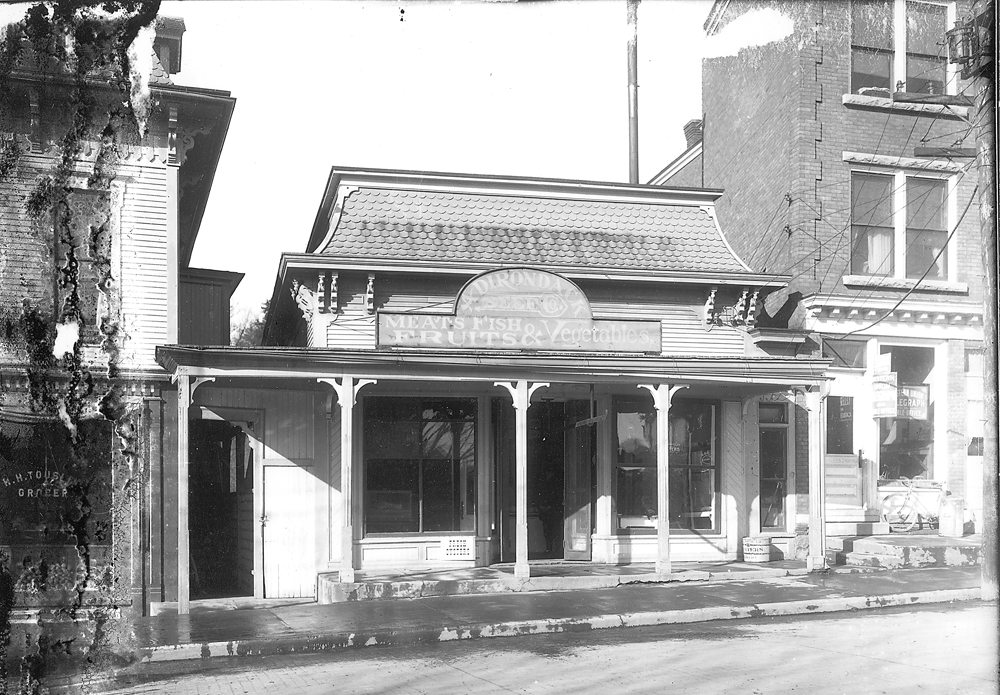 The first free library in Saranac Lake was on the second floor of a combination store and post office on Pine and Main streets (where Triangle Park is now). Hillel Baker, a college-educated man, described in several articles as “eccentric,” had a cobbler shop in one room, and he filled a second room with books and magazines that he encouraged neighbors, especially children, to borrow.

Dr. Edward Livingston Trudeau, who came to Saranac Lake to cure for tuberculosis, and friends organized a reading group that decided the community needed a permanent library. After $700 was raised, they purchased one-twentieth of an acre on Main Street (where Post Office Pharmacy is today) for $25, and built a one-story, wooden-frame building for its 400 volumes. 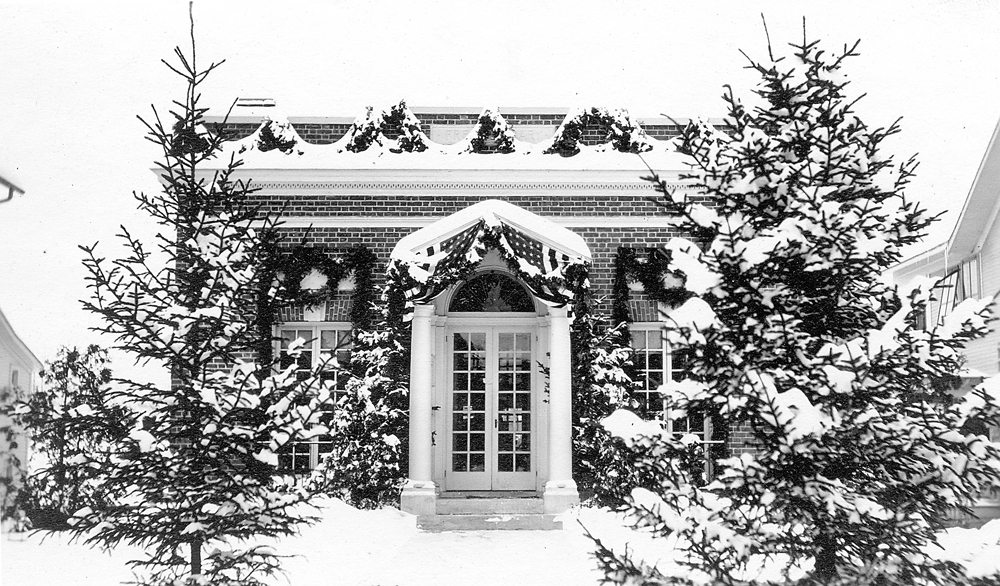 Called the Franklin County Library, it continued at that location for 10 years and opened one or two afternoons a week. An article by Ernest Baldwin reported that “Volunteers assisted in numbering and covering the books and acted as librarians.”

The famous author Robert Louis Stevenson, who cured in Saranac Lake during the winter of 1887 to 1888, borrowed books from the library. Before he left, he donated an autographed copy of Familiar Studies or Men and Books from a “grateful subscriber.” It is still in the Adirondack Collection. 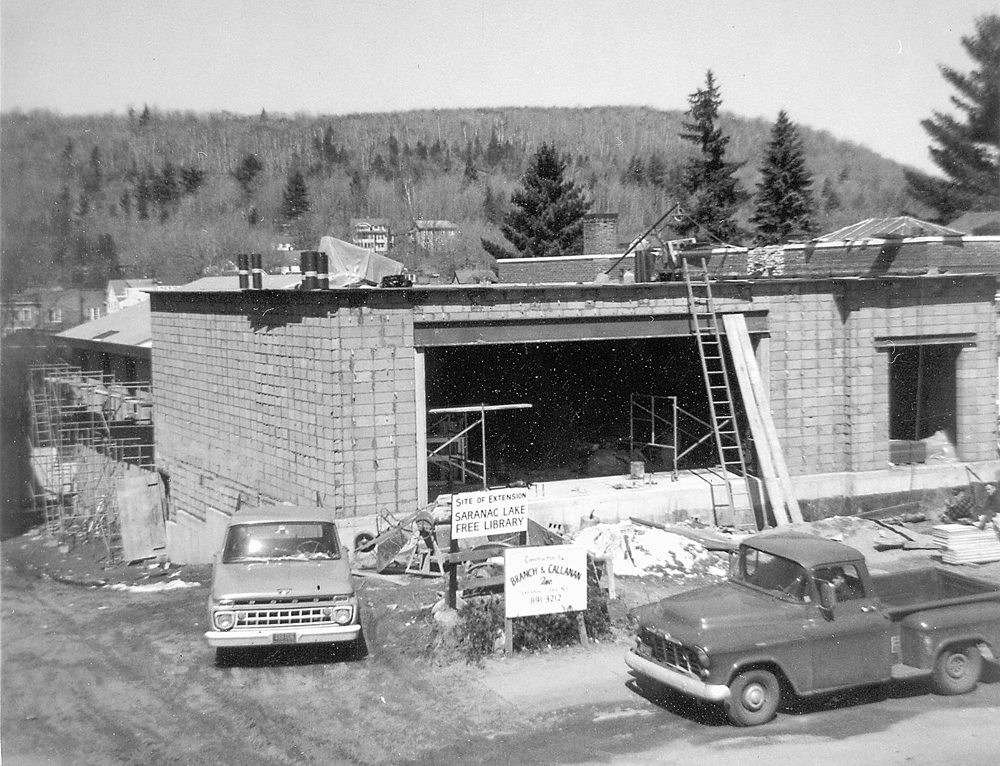 The 1968 addition to the library (Photograph #83.554 Courtesy of Adirondack Collection, SLFL)

The 3,000-book collection was moved to the new St. Luke’s Parish House where the library shared space with the church. The name was changed to the Adirondack Library.

The Regents of the University of the State of New York granted the charter for a Free Library Association on Dec. 21, 1907. The Library Journal, Volume 29, lists a Carnegie gift of $10,000. A building fund was also started. A lot on Main Street was purchased from Dr. Lawrason Brown who owned the adjacent property.

In 1909 Branch and Callanan was awarded the $7,500 contract to build the new library, designed by Scopes and Feustmann. The building, one room with a fireplace and large skylight, described at the time as colonial, constructed in red brick, was completed in 1910.

As the collection grew and more space was needed, a number of additions and improvements were made:

-1925 — Charles H. Ludington, a philanthropist, contributed more than $19,000 for a much-needed addition in memory of his wife. This included the current fiction section and front of the Adirondack Research Room on the lower level. The additional space allowed for the children’s section requested by Ludington.

-1968 — A second purchase of land belonging to the Saranac Lake Study and Craft Guild took place in 1956. A committee formed by the Whiteface Mountain Lodge 708, Free Masons raised $6,000 to purchase the land for the library. With planning started in 1965, this addition, financed with grants and bequests, designed by Distin and Wareham, included the Thomas B. Cantwell Community Room, upstairs reading area, director’s office and a wing for the Dickert Wildlife Collection which Edmond A. Guggenheim financed.

Dedication of the William Chapman White Memorial Adirondack Room took place on August 24, 1969. White, a columnist for the New York Herald Tribune and The New York Times and author of Adirondack Country, was very interested in Adirondack materials. Funds set up in his memory were used to furnish the Adirondack Room.

-1986 — The adult nonfiction section and Adirondack Room were expanded.

-2004 — The Elinor B. Preis Children’s Room was created by adding a second level to the Dickert Room. The museum was reinterpreted for year-round access; improvements were made to the Reading Area and an elevator installed. $700,000 was raised through grants and private donations.

-2008 — Extensive improvements were made to the Community Room, including the handicap ramp.

-2017 — History repeats itself: Just as Dr. Trudeau and his associates came together to form a reading group, so today the library offers four reading groups. They meet in the Dickert Room. For more information contact Judy Oehler at judySLFL@roadrunner.com or call 891-4190.

Join this group each Monday for good coffee and good conversation about local, national and world events. This group will begin meeting Monday, Sept. 18, from 10:30 a. m. to noon.

The Fiction Group will be reading dystopian literature for the remainder of 2017. On Tuesday, Sept. 12, at 2 p.m., they will discuss “Brave New World” by Aldous Huxley.

The Science Book Group will resume on Tuesday, Sept. 19, at 2 p.m. to talk about “An American Sickness” by Elisabeth Rosenthal.

Race: The Power of Illusion

The group for those interested in exploring racism in America will meet Monday, Sept. 18, at 2 p.m. to discuss “Empire of Cotton” by Sven Beckert.

“The Maltese Falcon,” starring Humphrey Bogart and Peter Lorre, will be shown Tuesday, Sept. 26, at 2 p.m.

Wouldn’t Hillel Baker be pleased to see our large Elinor B. Preis Children’s Room and to know that Preschool Story Time will resume on Thursday, Sept. 21, at 10:30 a.m.

Come to the Fair

Come to the Fair has a history going back to 1955 and an All-Male Bake Sale. The Fair’s 2017 theme celebrated the SLFL’s 110th birthday. The event was a huge success, realizing over $12,000 for the library. Thank you to all the volunteers who sorted, priced, cashiered, cleaned up, and to those who contributed items, baked their specialties, created craft items and Came to the Fair!

The value of a library

While this library history focused on the growth and development of the physical buildings, they all happened because of the many dedicated board members, volunteers and staff members who had the vision and energy to do the planning and raise the funds for much-needed additional space. The names of these people who believe in the importance of libraries and worked to bring their dreams to fruition would fill an entire page of the Enterprise. We are indebted to all of them.

On July 28, 1909, George V. W. Duryee wrote in an Enterprise article, “There is no doubt that a free library adds value to a community — worth many times its cost — in education, enjoyment and good citizenship.” The current board, also viewing the library as an indispensable part of the community, has recently developed a five-year plan and is soliciting input through a community survey so that the library will continue to respond to the changing needs of the community.

Sources are the following from the Adirondack Research Room.

“Library Holds Treasures of the Past” (1988, Enterprise, Delahant)

“One Hundred Years in the Making” (2007, Enterprise, Riotto)