8. ACR project was at a standstill 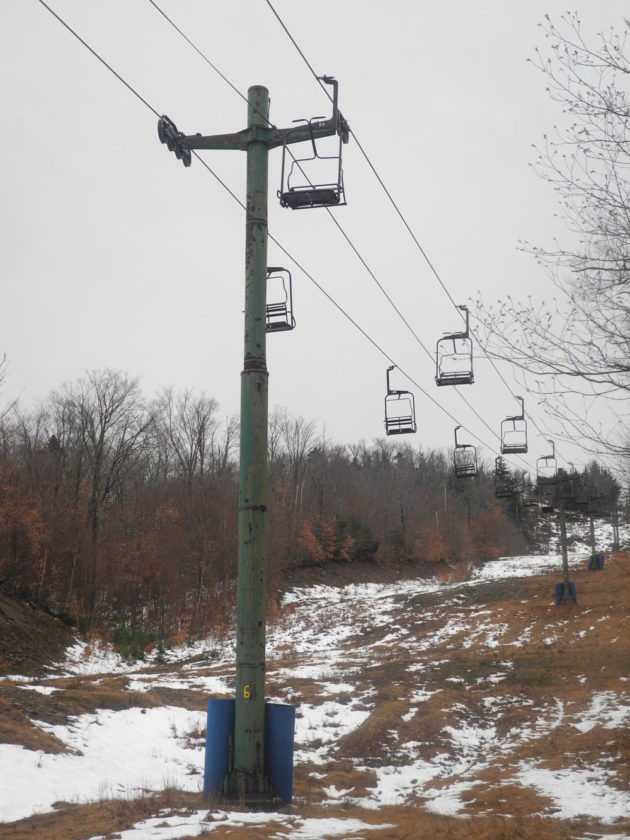 Vacant chairs dangle over the disappearing snow in December on the slopes of the Big Tupper Ski Area in Tupper Lake. (Enterprise photo — Kelly Carroll)

The Adirondack Club and Resort, a planned 6,200-acre luxury housing development, has continued to face financial challenges, not moving forward in the building process this year.

After 12-plus years in the process, the ACR began 2016 by getting an 11th extension to its permit from the Joint Planning Board in March since February 2013, when the board first gave approval to Planned Development District 1, a 3,200-acre section of the resort that contains 18 “great camp” lots.

At the time, ACR attorney Bob Sweeney told the board the developers were working on obtaining the approval of the Army Corps of Engineers and the state Department of Environmental Conservation to construct “Pond Road,” running 5.5 miles from the Lake Simond Road extension to the 1,200-acre Moody Pond lot, the development’s largest parcel, and the other 17 “great camp” lots. In addition, the great camp lots are currently owned by the OWD Corporation’s liquidated trust.

Develepors of the proposed land, Tom Lawson and Michael Foxman as well as real estate partner Jim LaValley, were still waiting on the two permits to construct the road as of August and still need to buy the land they’re selling, pay off $290,000 in back taxes on the ski area and get water, sewer and electrical lines to the lots.

They did, however, form five binding agreements of sale this year with an escrow balance of $15,750,000, which should help with the financial strain from its legal battles. The developers cannot make those sales until they have received the proper permits and purchased the land.

“We’ve been bled dry for millions of dollars,” Foxman, head of Preserve Associates, said in August. “We had about $10 million worth of lawyers and planners and engineering approval delay costs. I think that no one, including me, could’ve imagined the complexity of trying to develop in the Adirondacks with objections from the preservation groups.”

At the time, Lawson estimated investments made by Preserve, the project’s leading corporation formed by a small group of investors, to be around $30 million. Well-known golfer Greg Norman’s company, Great White Shark Enterprises, was still involved with branding and marketing the resort as well.

But Lawson also admitted in August he was financially stretched for cash, having three mortgage foreclosures initiated on personal properties and two liens filed for outstanding contractor bills totaling $117,801.33, according to Franklin County legal records. Lawson asserted he would not let the properties go to foreclosure.

“He’s an investor in the ACR project, and I guess the fact that he’s tight would certainly make it hard for him to put more money in the project,” Foxman said. “But he’s by no means the only source of money for the project. I don’t think it will really affect us except in the way of perception.”

“I wish them all the best, but for right now, we have to pretend like there is no ACR,” town of Tupper Lake Supervisor Patricia Littlefield said in August. “Of course, if we’re successful as a town now, then the ACR will benefit greatly from that later, if it does come to fruition.”

The ACR is expected to feature a renovated Big Tupper Ski Area as its centerpiece.

The area has not fared well in the past years, remaining closed for the 2014-15 ski season and considering not opening in the 2015-16 ski season, despite the best efforts of Adirondack Residents Intent on Saving their Economy volunteers.

The facility has no snowmaking equipment, which makes the area dependent on the weather. In 2014-15, the season’s limited snowfall and warm weather forced it to stay closed.

“It’s certainly a decision that did not come lightly, but we were feeling like everybody has been swimming upstream this winter, literally and figuratively. It’s unfortunate that the winter is what it is, but Mother Nature made the call and we had to answer,” LaValley, who is the ARISE chairman, said at the time.

The group, which has about 200 volunteers, also struggled with the mountain’s operating costs, which run about $130,000 to $150,000 annually. A core group of 40 to 50 people generally handle the bulk of the workload.