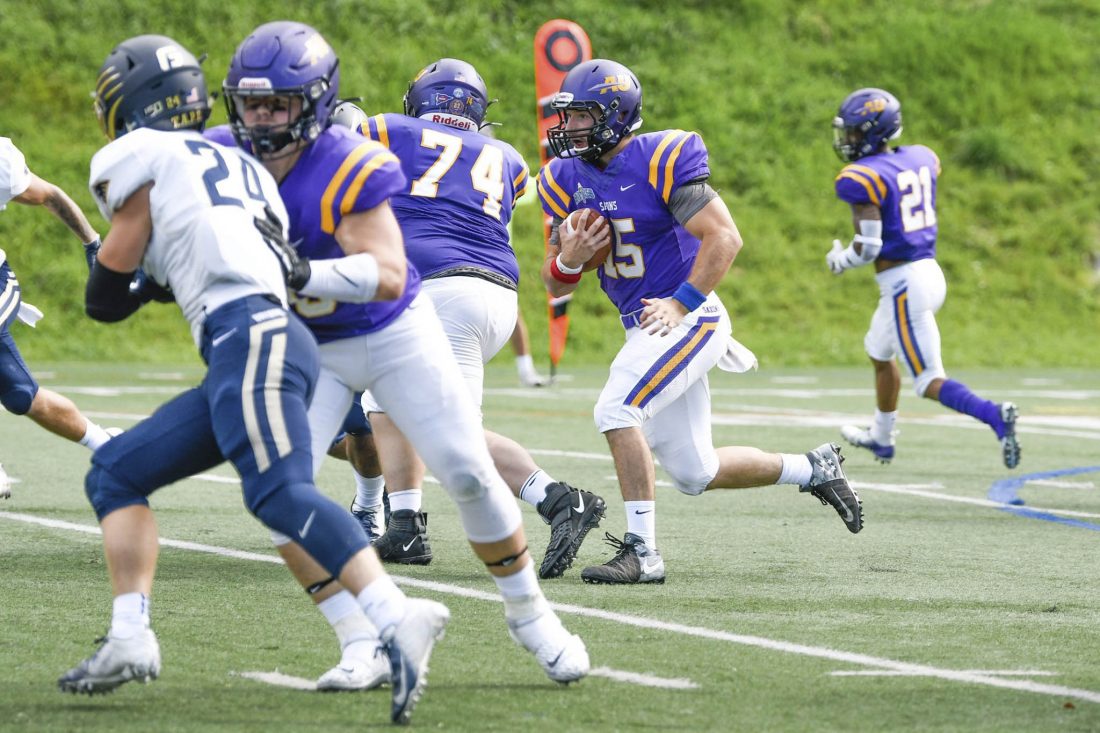 SARANAC LAKE — Will Coats, a 2017 graduate of Saranac Lake High School, has been named a 2020 Chi Alpha Sigma Honor Society inductee as a student-athlete at Alfred University.

Coats was a transfer student who attended Saranac Lake for his senior year and helped guide the Red Storm to a Section VII football title in 2016 as the team’s starting quarterback. He is now a junior at Alfred, and is one of 16 student-athletes there who were named Chi Alpha Sigma Honor Society inductees this year.

Chi Alpha Sigma is a nonprofit organization established to recognize college student-athletes who excel both on and off the field of competition. The honor society was founded in 1996 by then DePauw University head football coach Nick Mourouzis. His goal was to provide outstanding student-athletes with an opportunity to become connected within a fraternal association that aligns their educational and athletic successes for a lifetime.

Usually, just a handful of football players from Section VII move on play in college each year, and Coats was one of those following a season in which he was named the Champlain Valley Athletic Conference’s first-team selection at quarterback and was also an all-New York State honorable mention pick for Class C.

As a freshman and sophomore at Alfred, Coats played with the Saxons’ junior varsity squad and finally made the jump to the varsity team last fall as a junior. He started the 2019 campaign third on the depth chart at quarterback and got his big chance to shine two games into the season when the Saxons faced George Fox University, a team that made the long road trip across the country from its campus in Newberg, Oregon.

On that Saturday afternoon, on Sept. 14, Coats took the field after the Saxons’ starting and backup quarterbacks were knocked out of the game with injuries, and he led his team to a come-from-behind 15-14 victory in front of a home crowd of 1,500 at Alfred University’s Yunevich Stadium.

Playing in a contest he’ll never forget, Coats engineered an 85-yard drive in the fourth quarter and capped off the march by scoring the game-winning points on a 3-yard touchdown run. Coats carried the ball seven times in the game while picking up 70 yards rushing, with his longest gain a 44-yarder.

“It was the fourth quarter, we were down by a touchdown, and we were pinned down deep in our end,” Coats said. “It was a huge moment. Obviously, the nerves were there, but it was tunnel vision when I stepped on the field. We went 85 yards, all the way with the wildcat and won the game.

“When I came in, our guys kind of rallied up, came together and we busted out some nice runs,” Coats added. “I was kind of cool facing a team that came all the way from the West Coast. There weren’t many empty seats. That’s something I’m always going to remember. It was very exciting.”

Coats played in six games during the 2019 season. He also ran for another touchdown in Alfred’s 56-13 victory over the University of Rochester and finished the season with 197 rushing yards on 27 carries. Coats attempted just three passes in 2019, completing one of them for 17 yards.

Toward the end of the season, Coats made the move to running back, a position he is comfortable at and hopes to see plenty of action at during his final year playing collegiate football, providing there is a 2020 season.

“Running the ball has always been the strong suit of mine, and I’ve never been afraid to lay a hit on an opponent,” Coats said.

With on campus classes ending abruptly across the nation due to the coronavirus outbreak, Coats has been continuing his junior year of academics at his home in Keeseville. Pursuing a major in marketing and a minor in economics, Coats is currently finishing his classes on line, and at the same time, he’s staying involved with the football program with twice-a-week online sessions with coaches and Saxon running backs. He said the big drawback in terms of football is that 15 spring practices that were originally scheduled following the school’s break, have been canceled.

Although the future of sports is in question at least for the near future, Coats is doing whatever he can to be ready for the 2020 football season at Alfred University. He has been lifting in his basement at home and doing outdoor workouts that simulate as well as possible the running back drills he would otherwise be doing on the college practice field.

“It’s kind of hectic not having a weight room open,” Coats said. “I’ve thrown together a few weights downstairs and outside I’ve been doing some running back drills with cones, hitting a ladder. I look forward to seeing the gyms open back up. Being at home, it’s a little tougher holding yourself accountable, but being a junior, I know what you have to do to be ready when the season comes around.

“This COVID-19, it’s pretty crazy,” he added. “In lockdown, I’m trying to be as optimistic as I can be. I don’t want to even think about not having a senior year of football. I’m hoping it happens. I’ve been on the football field every year since I was young.”

As a high school senior and starting quarterback at Saranac Lake, Coats went from being a top dog to a newcomer on the college scene as a freshman. And the student-athlete with a 3.7 GPA said he’s really happy that he chose Alfred and actually hopes to graduate before May 2020.

“It’s been a lot fun there, both football and school wise, all three years,” Coats said. “It’s a pretty secluded place, and I think that helps. It’s a lot like Saranac Lake. I’ve been doing pretty well balancing academics and football. I’ve had a pretty good game plan throughout the day. Alfred is a really nice place, too. The teachers support you all the way, they help you out a lot. It’s a really inclusive place.”