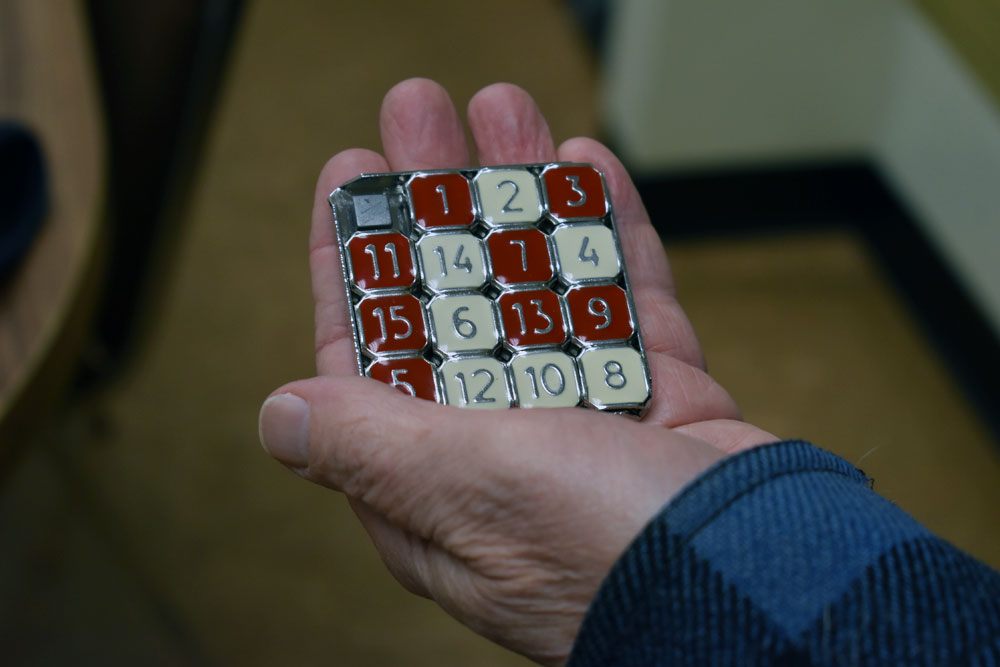 Having been a compulsive reader all my life, I always have a book or two on me. That way, during lulls in my inaction, I’ve got some form of entertainment to turn to.

Of late, however, I started wondering what besides books and mags could provide me with amusement.

My cellphone was out. It’s a flip phone of ancient vintage that has no apps (not that I’d know how to add one anyway). Nor can I text on it (because I can’t text). And so it stays in my car, off, only for emergencies (which is what it’s supposed to be for in the first place).

I do have an iPad, but that’s also a no-go. Sure, it can provide limitless entertainment and distraction, but it’s a pain in the dupa to shlep around. Besides, I wanted something non-electronic.

So if I didn’t want something electronic, what did I want?

Good question, and one I had no answer to. Crossword puzzles are a drag, since I always find them either too easy or too hard, each as much an insult to my intelligence as the other.

A puzzle? That sounded good, but what kind of puzzle?

Not a jigsaw one. First, it’d be too cumbersome, and second, when I thought about it, I realized I didn’t want a puzzle that, once it was solved, the thrill was gone. This also eliminated those little metal linking ones or the wooden ones with geometric shapes.

Trying to find a puzzle was becoming a puzzle, all of and by itself.

Something small, challenging, non-electric, with more than one solution? There had to be such a thing, but what was it and where could it be found?

I’d no idea what the “what” of that dilemma was, but I know exactly where the “where” was. If you want to put it in your GPS, it’s 9 Broadway, My Home Town.

A simple label, Goody Goody is a toy store. But that’s like saying Everest is a mountain, Einstein was a mathematician, and Shackleton was a guy who could handle the cold.

Yeah, it’s a toy store, but it’s a gargantuan one and it’s stocked wall to wall, floor to the rafters, with every manner of amusements that float or fly, bounce or buzz, amuse or bemuse. And it was the bemuse that I was looking for. Thing is, there’s so much stock in the joint, it shuts me down: I see all kinds of things, of all sizes and colors, all the hell over the place, and I can focus on nothing. Which is why I felt good going in there looking for my future puzzle — finally, I had one specific thing I wanted, even though I didn’t know what it was. But that’s what The Pasha of Playthings is there for.

The puzzle solved, for now

The PoP goes by another handle — Dan Sporn — and he’s the Goody Goody’s owner, CEO, and HCiC (Head Child in Charge). I figured if he didn’t know what I wanted, it didn’t exist.

“I know exactly what you want” he said. “Fifteen.”

“Fifteen nothing,” he said.

“Fifteen nothing?” I said.

If you think I started to feel like I was starring in an update of “Who’s on First?” without a script, or even a clue, you’re right.

Then he turned, snagged something off the shelf behind him, and handed it to me.

As soon as I looked at it, I was teleported back in time, specifically to 1958. I was in seventh grade, and Fifteen was my survival kit. I always carried it with me and in times of crushing boredom (like in science and history class), I toyed with it long enough to restart my synapses. It also kept me occupied in the sadly mislabeled “study halls.”

So what is it?

On the chance you haven’t seen one, I’ll describe it.

It’s a small square holder, with 15 sequentially numbered, sliding tiles on it. The tiles can move up and down and to the right and left, and the holder has spaces for four horizontal rows and four vertical rows. So there’s always one empty space. The point of the puzzle is to arrange the tiles in some specific order — ascending order going from top left to bottom right, or maybe descending order from top left to bottom right. Or maybe starting with the 1 on the bottom left, you can arrange them going up or going right or … According to the enclosed pamphlet, there are in all 30 different patterns that can be had.

Dan was right — whether I’d known it or not, it was exactly what I’d been looking for. Then again, it’s probably what a lot of people have looked for over the years — all 145 of them, to be precise. For all anyone knows, it originated in prehistory, but a man from Canastota named Noyes Palmer Chapman first showed one to friends in 1874. From there, it made its way to Boston, where a woodworker named Mathias Rice dubbed it “The Gem,” and in 1879 started hustling them. They became a nationwide craze for a while, and then, though they continued to be made, they faded into The Great Mist that absorbs all fads. Poke around in TGM, and I’m sure you’d find buttloads of fidget spinners, Boy George CDs, butch wax, stirrup pants, coke nails and God knows what else. In addition to Fifteen, it has been known as the Gem Puzzle, Boss Puzzle and Mystic Square.

The set-up and solutions to the puzzle’s various arrangements can be easily explained by mathematic theories, but I have a couple of problems with that. One is I’m a total mathematic idiot. Yeah, I can do basic computations fairly well, but mention stuff like “sets,” “theory of inversions” or “parity of the rows,” and you might as well be talking to me in Malayalam.

My other “problem” is I don’t really care about solving the puzzle, and I’m not sure I ever did. Given my mathematic ineptitude, even if I did make one of the patterns, I’d never remember how I did it. Nor do I care enough to keep the steps in mind. Instead, I like to play with it. It takes up spare minutes; it requires some focus and strategic thought, but not so much that it’s a strain.

If by some miracle I figure out how to do all 30 patterns, that’d be fine. But if I never figure out one , that’s fine, too. It is, after all, play — the point of which, as far as I’m concerned, is the process, not the result. And if that’s not what fun is all about, I don’t know what is.

So when it comes to my Fifteen and me, wish me luck. But not too much of it, OK?