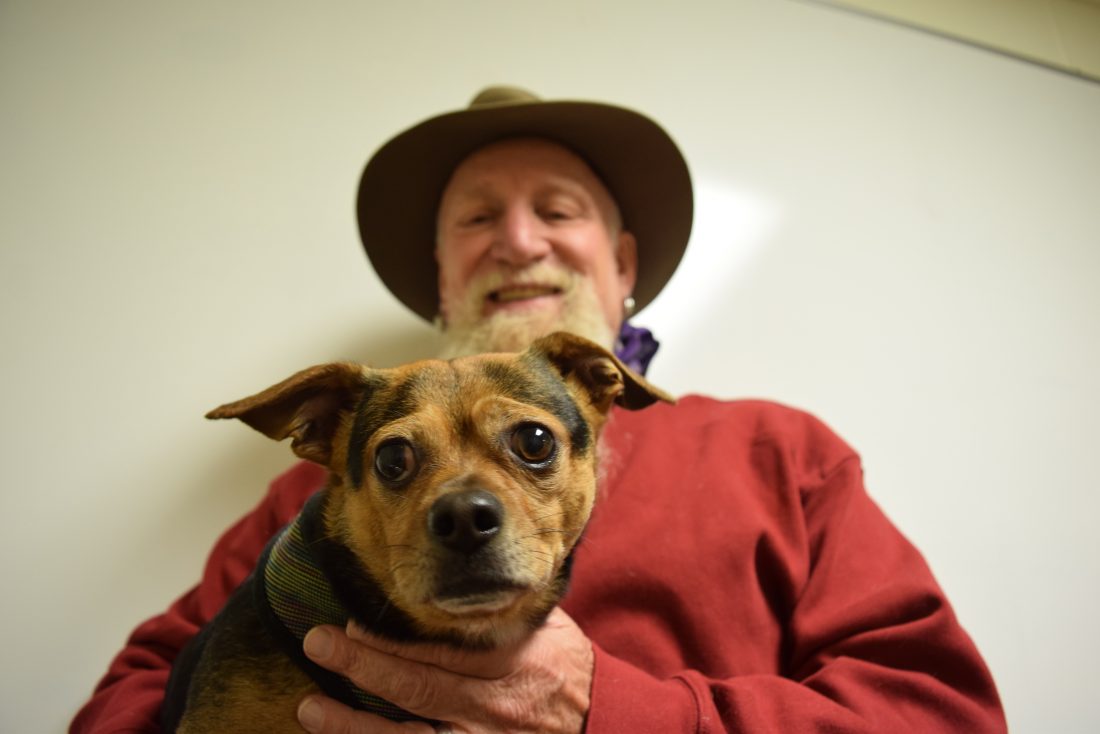 As a wee tyke, if I learned nothing else, I learned this: I would never, ever, upon pain of flogging, act out in a doctor’s office.

There was a good reason for this — my father was a doctor. So while my mother demanded we always behave well, she was absolutely fiendish about our behavior at the doctor’s — even when getting shots. I guess it was a mother’s view of professional courtesy combined with quid pro quo — if her kids were ideal patients for other doctors, then other people’s kids would be the same for my father. It’s only guesswork on my behalf. What ISN’T guesswork is my mother would’ve thought Daisy is the world’s worst patient.

In all fairness to Daisy, she’s a dog, not a person. Still, even as a dog patient, she’s a handful to deal with. Matter of fact, on Wednesday she was SIX handfuls — literally.

Here’s the thing about Daisy: When I first got her, I tested my theory on how to make a dog not fear going to the vet’s. I’d take her in the vet’s office BEFORE she had an exam. You know, just walk in, say howdy-doo to each and all, snag a couple low-end biscuits, get petted and fussed over a lot, and as a result come to see the vet’s as a great place to visit.

It was a brilliant theory. It was also a dismal failure.

As soon as we got in the door, she turned the doggy equivalent of paranoid. She looked high, low and every which way, and then made a mad dash to the door. And as if that wasn’t clear enough, at the door she got on her hind legs and started scratching it frantically.

I’d say at that point it was back to the drawing board, but there was no drawing board to go back to. For reasons known to perhaps only a few eminent canine psychologists (and definitely known to Daisy), there was no way she was ever going back in there willingly. And that’s how it played out the next time, and every time thereafter.

She even started losing her cool as soon as we pulled in the lot, which left me with no alternatives. I just had to tuck her under my arm and shlep her in the joint, and once there try to bribe her with a steady stream of biscuit shards. That phase usually went all right.

But the next phase — taking her in the examination room — upped the ante for mania. The moment we got in the room, she zoomed under the chair, where neither biscuit nor blandishment could lure her out. And while she was there, she looked like she knew a tumbrel was in the back room and she was its next passenger. But that was just the start, because when a vet tech walked in, it was the canid/human version of MMA.

Now an aside. When anywhere but the vet’s, Daisy is a sweet, happy, adoring little mutt. She loves everyone, especially children, and she’s the most affectionate dog I’ve ever had. And to her credit, no matter how badly she’s freaked out, she never bit anyone. But even though she doesn’t bite, she can raise all kinds of hell anyway. And that’s just what happened Wednesday.

It was just her annual visit — get checked out, poked and prodded a bit, and then get some shots. Sounds trouble-free, doesn’t it? Well, as long as you’re not trying to do it, so does running a marathon, teaching English, or winning a war. And in this case, the war metaphor is sure appropriate.

First, the vet tech, Sarah, came in and went over Daisy’s chart with me. Daisy never budged from under the chair.

Then Sarah had to give her a cursory look-see, which meant I first had to haul Daisy out from her lair and put her on the table. So while she struggled mightily to get off the table, I struggled more mightily to keep her on it. Which I did by keeping her in a bear hug that would’ve done Bruno Sammartino proud. The look-see over, I put Daisy down and she sprinted under the chair while I popped a couple Nitro tabs.

The preliminaries over, we now waited for the main event, which would start when Dr. Donna Mensching came in. And a few minutes later, in she came.

A note about Dr. M. She’s my Numero Uno vet, and the only one I want for my dogs and cat. She’s sharp, thorough, pleasant and kind. All of which means doodle-squat to Miss Daisy, who I again had to wrassle out from under the chair and onto the table. Donna went through her procedure: eyes, ears, teeth, press here, probe there. And I went through mine: Talk soothingly, hand out biscuits, clamp here, hold there, grit teeth, curse gods …

Finished with that, Daisy again scooted under the chair, and I popped another Nitro.

“All right,” said Donna, “she needs her distemper, Lyme’s and flu shots. Plus, we need to draw blood to check on her Lyme’s and heartworm status.”

“You want to do them all at once?’

“Well, we could do the shots, and then you could come back for blood drawing.”

My thinking was, why traumatize the dog (and the rest of us) twice when it could all be over in one visit. It made perfect sense … for a human. Unfortunately, it made no sense to Daisy.

What happened was, with each shot, she became more wild and wigged.

Then it was time to draw the blood.

First it was Donna and Sarah. When they couldn’t hold her in place, they called for reinforcements in the form of another tech, Heather.

So here’s the scene: Daisy’s in Donna’s arms, writhing, kicking, shrieking, like something out of a WWE ring or a mosh pit. Sarah is holding Daisy’s rear leg, trying to steady it so Heather can find a vein in a leg which, if you’ll pardon the pun, was all in vain.

They’re all locked in some crazy group hug, stumbling one way, then the other, gripping this, grabbing that, calling out instructions and encouragements, as if they’re somehow in control of this shtuss. Meanwhile, Daisy has transmogrified from a mere mutt to Dogzilla!

Keep in mind, Daisy is a small dog — 15.2 pounds, to be precise. But what she lacks in weight, she more than makes up in original sin … as Larry, Curly and Moe are finding out.

The shrieks, howls and screams hit the 100-decibel mark; the three villains look like they’re caught in gale-force winds. Meanwhile, my heart is about to pound its way out my chest wall as I find myself praying to St. Francis of Assisi.

Another long minute goes by and — Blessed be! — blood has been taken and not spilled, and everyone’s breathing and pulse is returning to normal — including Daisy’s.

On the ride home, the more I cogitated it, the more I realized it was my fault things went sideways. I thought it’d be easier to get it all over with in one visit. To me, thinking like a human, this made perfect sense. But to Daisy, thinking like a dog, the longer it went, the worse it got. It would’ve been far better if I’d cut this visit short and then come back in a couple of weeks to finish the procedure.

Essentially, it’s always risky to believe you know what’s best for anyone else, regardless of species.

Which reminds me of a joke …

A woman goes in the dentist’s office and asks how much an extraction costs. The office manager tells her.

“And how much is it without anesthesia?” the woman asks.

“No one has it done without anesthesia,” says the manager.

“All right,” says the manager, and quotes her another price. Then she adds, “But I need to warn you, it’s very painful and traumatic without anesthesia. You’ll be suffering a lot.”