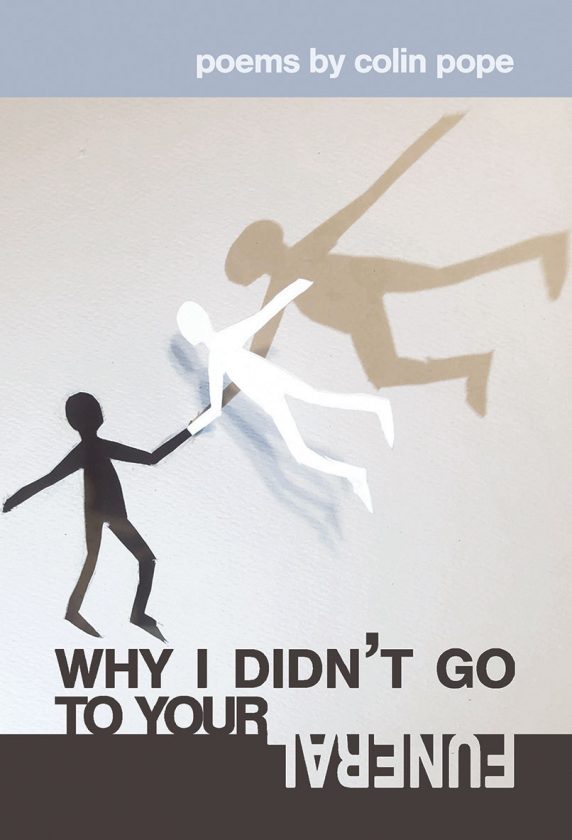 Book cover for "Why I didn't go to your funeral.:

This collection of poems explores loss, guilt and grief. In many of the poems the narrator reflects on the loss of an ex-girlfriend to suicide. Glimpses of the relationship, the woman, the struggles are interspersed with the awful fact of her death and its aftermath for the narrator. Pope upends the idea of grief as arriving in stages; rather, it comes as waves and tides, as drought and tsunami.

These are long poems of long lines, almost as if in words themselves the poet is trying to find salvation. But the wry tone that permeates the collection sounds the hollowness of the hope of salvation at all, and yet itself is the sound of life, and the narrator, going on.

In “Still Life With Casket in the Distance,” the poet writes, “I was not crying, you could not / call it crying, an ocean had simply tipped over / inside me and droplets were leaking out / from where my eyes used to be.” It is almost-comic moments like that that save the collection from the weight of its own subject matter.

There are beautiful moments too. From “Only Here for Support, I Struggle to Restrain Myself from Offering Advice to the Beginning Pallbearer” is this imaginative notion, misplaced modifier notwithstanding: “Held aloft, / you know them as the Earth knew them, moving slowly / beneath the gyroscope that kept head above feet / as long as it could …”

The imagery is often striking. From “Phone Call to Plan Abortion, as Flood,” which details a difficult, post-relationship conversation:

the ragged corpse of goodbye

is waiting for us to find it, but instead

we stay on the line, petrified

that when we hang up it will be the last time

we’ll ever hear each other breathe.

Colin Pope is a Saranac Lake native, and locals especially will appreciate several poems in the collection with recognizable shout-outs, including “A Lesson While Hiking Mt. Skylight” and “Dove Hunting,” both noted as being in honor of Maurice Kenny.

My favorite poem in the collection is “If You Ever Become a Paper Doll.” Speaking to the imagined “you,” he describes how “a chain of perfect strangers / unfurl themselves … / and hold your hand.” It is a moving poem of losing and finding, of imagining the beloved in some beyond where “the god of expression blesses you with a smile.” But the narrator slides into the one left behind with the final sentence. “Be thankful / you’re not that poor lonely twin,” Pope writes:

at the end of the line, one arm raised

and reaching out for someone

who will never reach back.