Bluebirds are returning to the North Country

Bluebirds are among the first birds to return in the spring. And for some bird-enthusiasts, attracting a pair of these harbingers of spring to a backyard nest box and having them fledge a brood of young bluebirds is the ultimate birding experience.

Bluebirds are small thrushes; relatives of the American robin. Three species live in North America. The eastern bluebird (Sialia sialis), the species we see here, ranges from the eastern foothills of the Rocky Mountains to the Atlantic coast. They overwinter in areas as far south as central Mexico, southern Florida, and by some accounts, Cuba. In the spring and summer, they nest in areas as far north as southern Canada. Not all eastern bluebirds migrate, however. In many southeastern and south-central states, there are populations that remain year-round.

Eastern bluebirds have rust red breasts, flanks and throats, and white bellies. Males sport bright blue heads, backs, tails and wings. Females have blue tails and wings, but their heads are more of a gray-blue and their backs may be a rather dull brown. Both have short, black bills.

Eastern bluebirds avoid heavily wooded and densely populated regions. They prefer open, sunny habitats such as meadows, pastures, fields, orchards and other areas where vegetation is sparse and trees are scattered. They look for small holes in the trunks and limbs of trees and in old wooden fence posts, and will build their nests in these natural cavities.

In the spring of the year, the male bluebirds will usually arrive shortly before the females. Older birds, if they were successful at raising a brood last year, commonly return to the same nesting site. Young birds frequently return to within a few miles of where they hatched to look for a territory with at least one, and preferably several nesting sites.

Once a male finds a suitable area, he’ll travel from site to site, stopping at each location to sing, in hopes of attracting a female. Once a female accepts his invitation, she’ll begin to build at least one, and sometimes several nests of soft, dry grass, pine needles, rootlets and weed stems. Eventually, she’ll decide on one site. Nest building may take anywhere from less than a day to two weeks.

Once the nest is built, the female will lay one sky-blue egg every morning, usually for 3 to 5 consecutive mornings, although clutches of as many as eight eggs are not unheard of. When she’s laid the last of her eggs, the incubation period begins. It’ll be about two weeks before the eggs begin to hatch.

Nestlings hatch without feathers and with their eyes closed. Once hatching begins, brooding by the female will be almost constant, but will gradually lessen as her young grow feathers. Both the male and the female see to it that the babies are fed and that the nest is kept clean.

Within two to three weeks, the young are ready to leave the nest. It’ll be a while longer, however, before the fledglings are fully able to fend for themselves.

It’s not at all unusual for eastern bluebirds to raise two broods in a typical North Country spring / summer season. They may elect to build a second nest on top of the first or they may select another nesting site within the mating territory. There have been numerous reports of young birds helping their parents raise babies hatched in later broods. The family will often remain together into the fall and then join with others to form larger flocks, before migrating to southern latitudes. Birds nesting in northern New York will usually migrate as far south as Virginia, Tennessee and the Carolinas.

Eastern bluebirds typically feed on insects and spiders in breeding seasons and on wild fruits in non-breeding seasons, when and if they’re available. Preferred insects include caterpillars, crickets, grasshoppers, leafhoppers, beetles, moths and butterflies.

Bluebird populations declined significantly during the 20th century. Several factors, including harsh winters, pesticide use, removal of habitat trees, replacement of wooden fence posts with metal ones and competition for nesting sites from European starlings and house sparrows, both introduced species, have all been cited as reasons for their decline.

But, thanks to the efforts of dedicated bluebird enthusiasts, the eastern bluebird is no longer headed for extinction. In many places, European starling and house sparrow populations are being controlled and bluebird nest boxes are being (or have been) erected. When placed in suitable locations, nest boxes are as attractive, or even more attractive, than natural cavities to bluebirds.

Birding can be rewarding fun for people of all ages. The best part is that you too, can participate by simply setting out a properly constructed bluebird box, or series of bluebird boxes.

And if you want to take it one step further? You can become part of a network of a citizen scientists from across North America, who are collecting and submitting nest records for bluebirds and other nesting birds to Nestwatch; a backyard and neighborhood bird monitoring program developed by the Cornell Lab of Ornithology with support from the National Science Foundation. To learn more, visit nestwatch.org.

Is yelling obscenities a right?

Last week’s article was about “vlogging while driving,” which is certainly a very dangerous thing to do while ...

A circus tale: From Russia, to America, with love 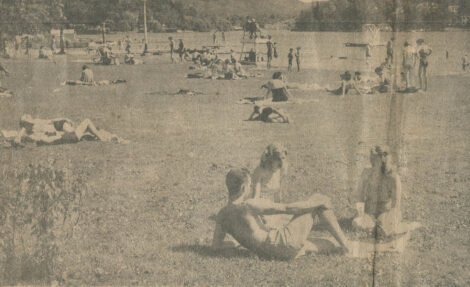