Chasing chills, thrills and bass on the waterways 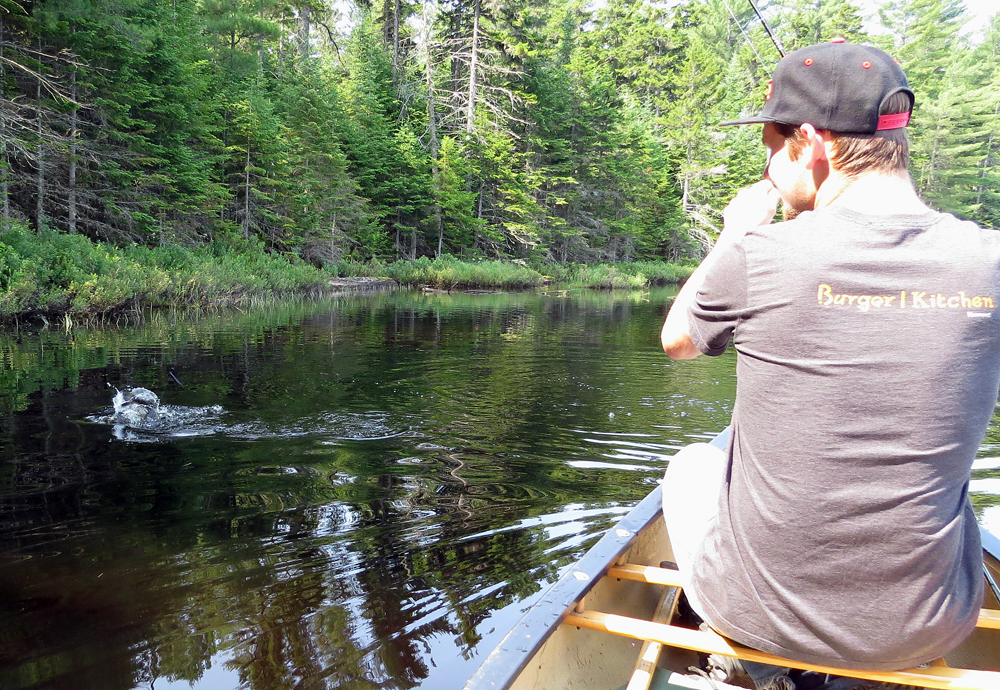 Having a bass on the line often results in some epic battles. (Provided photo — Joe Hackett)

Hot, muggy weather has finally arrived in the Adirondacks, as have deer flies, horse flies, mosquitoes and the little bugs with a big bite — the no-see-ums.

Although summer remains the shortest of all seasons, locals and visitors alike continue to pack a whole lot of fun into the brief summer period.

While stand up paddleboarding (SUP) continues to attract a group of non-traditional paddlers to the local waters, so have the banshees of the backwoods — the mountain bikers and their fat tire brethren.

lt seems there is a new means or method of outdoor travel that is developed every week. Fortunately, there will always be room for more. Although I don’t foresee a future for freestyle, downhill unicycling, it is always interesting to see what the next new thrill will bring.

For now, l will continue to chase my thrills and chills while casting flies to wild trout from the bow seat of a guideboat, or from the cushy confines of a pack raft, high on a mountain pond.

While trout are still to be found rising to flies on most of the local waters, bass will increasingly command the attention of anglers on both rivers and lakes. Father’s Day weekend ushered in the official bass season for those who do not practice catch-and-release angling.

Whether baked, grilled or breaded and deep fried, you simply can’t go wrong with bass. Now that the catch-and-release season is over, it is a good time to get out and enjoy the “other” white meat.

Conversely, flyfishers can, and should, consider taking their long rods to the many bass holes across the region. Some of the best bass fishing l have ever encountered was found in and around the tail waters of the Raquette, the Ausable, the Hudson and the Saranac. In addition to quantity, the rivers provide true trophies. I have seen bass in excess of six pounds taken tfrom such waters.

While the major flows hold decent fish near the dams, there are big fish in secluded areas that have never been fished.

“They die from old age, and have never seen a buzz bait or a Gary Yamamoto. So, get off your bass and get out there while you still can … winter is coming and it is difficult to catch bass when the local lakes are frozen up tight!”

Turn up the heat

As the heat of the summer season begins, bass fishing correspondingly turns up the action, especially on the surface. While bass will hit just about anything that is tossed their way, at times there are certain conditions that have proven to provoke a bassing bonanza — when they are particularly aggressive.

Bass are typically active on dark, overcast days, especially as a low pressure front is moving in or out. Although l enjoy angling at any time, l am especially fond of tangling with small mouth bass in the rivers and streams, where their unique aerial displays are most common. Pound for pound, a seasoned smallie that knows how to take advantage of the river currents is one of the most formidable fish to have on the line.

They are also one of the most acrobatic species, which makes them a prime target for top water anglers. In my long career, I have have enjoyed some of the most memorable outings while chasing bass.

Although l prefer to hunt bass while tossing a popper with a flyrod, l am equally entertained tangling with them on ultra lite gear, where small spoons and spinners always prove productive.

While soft baits such as Gary Yamomoto senkos, and a million knockoffs will usually take bass, there is no bass known to man, that won’t hit a live crayfish. Bass earned their nickname, “hawgs” for good reason, which explains why they continue to be the most popular game fish in the country.

They are also the most popular game fish in Japan. Following  the surrender of Japan in World War lI, the US Army stocked largemouth bass in many of the freshwater reservoirs, to provide wholesome entertainment for the troops stationed there.

For many years, a Japanese angler has held the world record for largemouth bass with a 22 pound, 4 ounce monster taken on Lake Biwi , in northern Japan. The old record, was taken from Lake Montgomery in Georgia in 1932, before it was eclipsed in 2016.