While waves of snow recently covered the frozen waters of Lake Colby, another thaw nearly stripped away any evidence of the carpet of snow. (Provided photo — Joe Hackett)

It is likely to be a bit cool for bathing in the local forests at this time of year, especially if the skinny red snake in the thermometer remains curled up in the bulb like a snoozing cobra.

However, such was the case as I headed off to visit a secluded parcel of private land with a mature forest of white birch, yellow birch and soaring old growth white pines. It is interesting to consider how efficiently and sympathetically our wildly diverse forests can coexist without interfering with or threatening their neighbors.

We have a lot to learn from the old matriarchs that we share the planet with: all living things. Trees and vegetation are the lungs of the earth — without the fresh air they produce, we would not be here.

Over the weekend, I traveled to the local woods to tag along with a friend who was hosting a forest bathing outing. I must admit, I was a bit hesitant when I first received the invitation.

It was not due to any perceived exposure issues since forest bathing does not involve any actual disrobing. The bathing that occurs involves breathing in and consuming the cool, fresh and possibly antiseptic air. It is a process similar to the one that put Saranac Lake on the map as a worldwide cure center in the late 1800s. 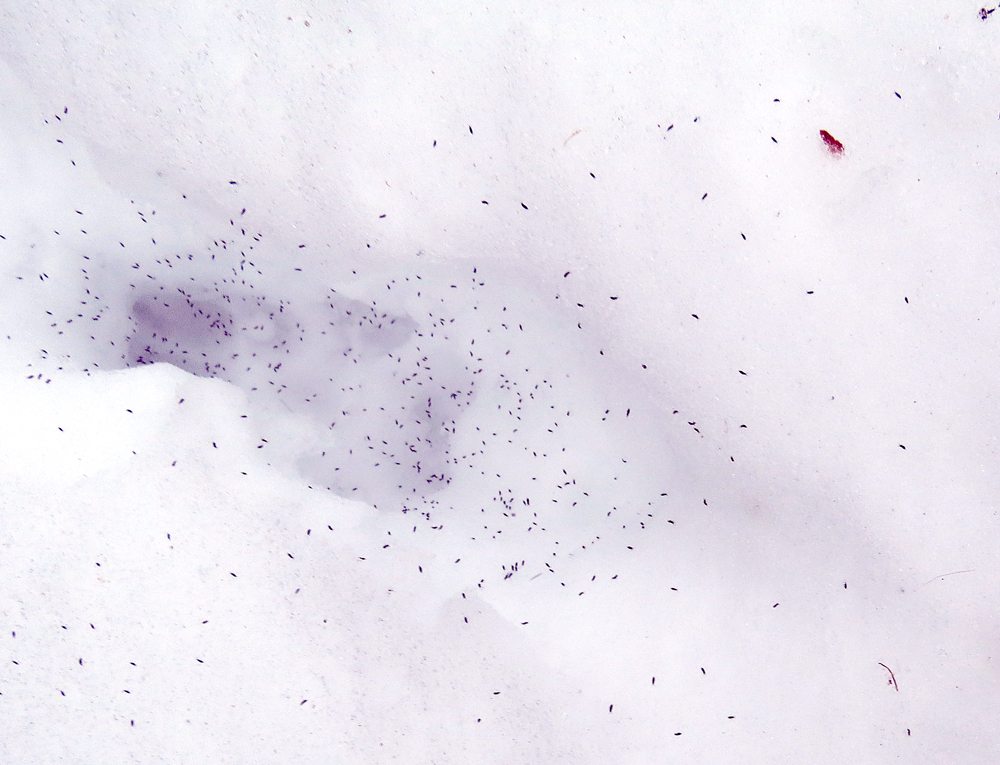 Evidence of warmer days to come, can be found on snow-covered tracks, where snow fleas gather by the thousands. (Provided photo — Joe Hackett)

When I met up with the group of fellow bathers near a parcel of private forested land, I realized I was the only guy in the group. Although wildwood wandering is often considered to be a rather macho pursuit by some, it is important to remember women were actually the true campers in most indigenous societies.

I suppose my reluctance to pursue forest bathing was due to an inherent rejection of fads. Regardless of whether the practice of forest bathing is a fad, a fraud or a flop, it has become a bellwether of the new New Age Ball. In terms of tourism, it may be a boon for rural forested lands.

Fortunately, scientific studies appear to confirm the benefits of the practice, which is also known as shinrin-yoku, as practiced in Japan. It has actually been proven to lower blood pressure, fight off depression and reduce stress.

Shinrin-yoku is actually a phrase that was coined by government researchers in Japan in the 1980s. It translates loosely to “taking in the forest atmosphere.” The process was inspired by Shinto and Buddhist practices prior to Japanese and Korean researchers conducting further studies around 2004.

The practice, as I’ve observed, involves a tangible recognition and acknowledgment of the forest and all the natural creatures it hosts. It is a process similar to the celebrations, prayers and rituals that often accompany First Nations ceremonies.

My introduction to forest bathing was provided by Helen Gibbons, a local certified forest therapy guide who also conducts Riverwalking Adventures during the summer season. Gibbons is a competent and confident facilitator, and I had been looking forward to participating in her programs for quite a while.

She is also an experienced yoga and wellness instructor, and it was evident she was comfortable in such matters.

Gibbons facilitated the program seamlessly, with a brief introduction that included a prayer of thanks to the earth. The air was cold and the wind was whistling through the pines as our small group set off through an old forest of soaring white pines that were interspersed with pockets of white birch saplings and yellow birch.

The actual process of the forest bathing program involved a series of sensory awareness exercises intended to provide participants with a set of tools that will allow them to be wholly immersed in the scene. The exercise was orchestrated masterfully by Helen, as she led the group through a process of non-verbal communication that provided a pronounced awareness of sounds, texture and scents of the wild.

From a sportsman’s perspective, the situational awareness exercises were beneficial. When I travel in the woods, I tend to look for tracks, signs and similar indicators of possible consumptive opportunity. For many sportsmen and women, the woods and waters serve as an interactive playground that provides both consumptive and non-consumptive opportunities.

However, the program would be equally appropriate for birders, hikers, skiers and other such wanderers of the wilds, as it provides participants with a unique perspective of what may often be considered just an ordinary scene.

Although there were no religious overtones expressed, beyond an initial prayer of thanks, there was an undeniable non-verbal confirmation of a higher power, which is obvious whenever you travel to places that others don’t.

For further information on Adirondack Riverwalking and Forest Bathing, please visit www.adirondackriverwalking.com or contact Gibbons at 518-637-2963.