Out of the woods 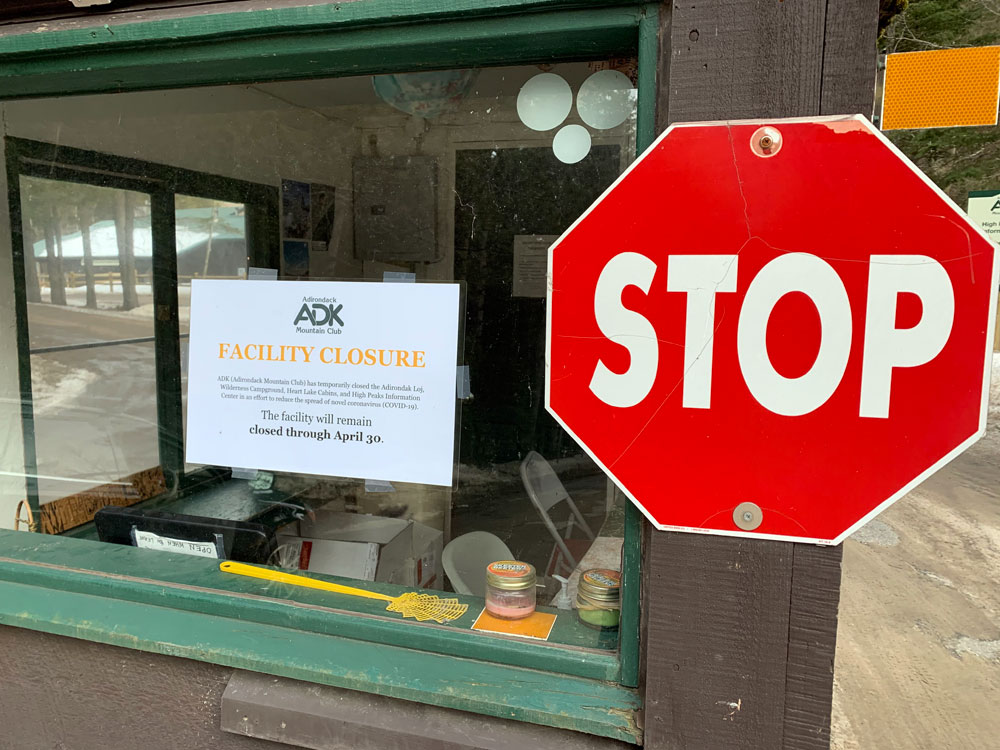 A “closed” sign at the entrance to the Adirondack Loj is seen on Monday. (Provided photo — Zack Floss)

Have you ever wondered what it would be like to come back from a camping trip into a wholly different world? That’s what happened to Miles and his friends this week. The group of four had driven up from Brooklyn, stopped in to rent some cold-weather gear and gone off into the High Peaks.

When they arrived in Lake Placid on March 7, the world was still figuring out what to do with a virus-stricken cruise ship. The South by Southwest festival had just been canceled as the White House spoke in opposition to health officials, dismissing their warning that the elderly should avoid flying. America only had a handful of confirmed COVID-19 cases at the time, and the political storm that broke during the last week was still on the horizon.

Now, as they pulled back in to return their gear, soaked and tired, Miles and company had a lot of catching up to do. In between relating some brief stories from their week in the woods, they stepped aside to call family members downstate and learned about a city moving towards quarantine. The general sense from the group was a sort of stunned amazement as they prepared to drive back down into the maelstrom that they had left in relatively good order just a week before.

There was one thing Miles said that really got me thinking. In a passing moment of wry humor, he said, “Well, at least there’s no risk that we’re contagious yet.” At first, when he said it, I took that as an absolute truth. Of course he couldn’t be sick, he had been out in the woods for the last week! In fact, though I hate to admit it, talking with Miles marked the first time in a week where someone’s being from New York City didn’t make me think about the word “Coronavirus.” But then it struck me that this was a pleasant fiction, an assumption about the clean and untroubled nature of wild places that I completely took for granted. Does being out in the woods really do anything to mitigate the risk of spreading infectious diseases?

From one angle, it’s tempting to say, “Yes, it does.” Being outside seems to have some distinct advantages: There are fewer people and points of shared contact, like doorknobs or money, where transmission could occur. In lieu of restaurants, you bring and often make your own food. Generally, you think of the hiking community as fairly fit and healthy. On top of all this, there’s a strong correlation in our collective imagination between crowded spaces and the spread of disease. Concerts, subways, office buildings and the like are the places we think of when we reach for the hand sanitizer. Could you catch COVID-19 from the walls of a lean-to? I hadn’t even considered it before.

Lacking these answers, one thing is relatively certain: Miles and his friends are likely the last group I’ll run into who were out there in blissful ignorance during the transition from concern to crisis. Moving forward, every group similar to theirs would have to consider the possibility of one of their expedition members starting to cough, making sharing a tent a potential nightmare. Sanitation, a challenge in the backcountry to begin with, would become a constant concern. Maybe the woods are no better a place to avoid contracting or spreading illness after all.

With last Friday’s news that the Adirondack Mountain Club was temporarily shutting down all of its lodging facilities (including the Johns Brook Lean-tos and Heart Lake Wilderness Campground), it would seem that the Adirondack wilderness is balanced between being considered a risky public gathering place and a sanctuary space. But even as the weekend progressed, as event after event was canceled and toilet paper disappeared from grocery store shelves, I couldn’t help but think of Miles and his friends. Despite emerging into the relative chaos of a very frightened world community, they all carried that unmistakable air of calm that one only has after spending some time in the mountains. While it’s worth being cautious, maybe more of us should take a few hours or a few days and go for a hike.