Tools of the astronomer 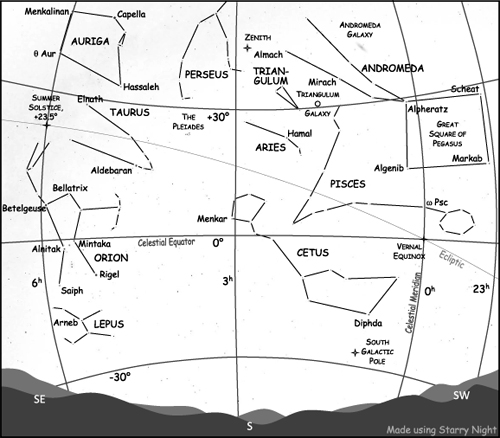 View toward the south from Tupper Lake at 9 p.m. on Dec. 17, 2019 showing the cosmic grid of right ascension (measured to the east from the vernal equinox in hours) and declination (measured north and south from the celestial equator in degrees). (Provided image)

The Celestial Grid Places on Earth can be designated politically, with country, state, and city or physically, with latitude and longitude. The Adirondack Sky Center’s Roll-Off Roof Observatory is at 178 Big Wolf Road in Tupper Lake, NY, USA and at 44 degrees 15.303′ (44.255 degrees) North, 74 degrees 28.259′ (74.471) West. The first address gives the location of the entire piece of property on which our RORO sits. The second gives the position of the center of the RORO to an accuracy of 6 feet (1 minute of latitude is one nautical mile, 1.15 statute miles or 6,072 feet).

Since astronomers need to know the positions of celestial objects to a very high accuracy, we also have a grid system for the sky that is, essentially, the projection of the latitude and longitude system on Earth.

Mintaka, the rightmost (westernmost) star in the Belt of Orion is less than a degree south of the celestial equator. As shown in the diagram, this marks the eastern side of the celestial equator in tonight’s sky. The western side is not marked by a star, but does have an arrow pointing it out in the form of the left (eastern) side of the Great Square of Pegasus. The line from Alpheratz (AL-fur-oughts) to Algenib (al-GEN-ebb) is about 5 degrees (half the width of your fist held at arm’s length) east (left) of a lonely star named Omega Piscium (PISS-ee-um). This star is about half way from the bottom of the Great Square, the line from Algenib to Markab to the vernal equinox, the position of the sun on March 21. Physically, the vernal equinox is where the Ecliptic, the annual path of the sun across the sky, crosses the celestial equator. Thus this marks the western side of the celestial equator in our December sky.

The Great Square also gives us a guide to celestial longitude, known as right ascension for obscure historical reasons too complicated to explain as part of this column. The vernal equinox marks the celestial meridian, the “prime meridian” of right ascension like the prime meridian of longitude that passes through the observatory in Greenwich, England. Unlike longitude, though, right ascension is only measured in one direction, to the east (leftward as one faces the sky looking south). It is also measured in hours, not degrees, where each hour of right ascension is 15 degrees wide. This is because we see the sky moving westward at 15 degrees per hour (to go all the way around in 24 hours).

The width of an hour is approximately the width of the Great Square. On the diagram, the celestial meridian is shown just west (left) of the line from Alpheratz to Algenib passing very close to Omega Piscium and through the vernal equinox. Farther west, just left of the line from Markab to Scheat (SHE-ought) is the 23 hour line. So the Great Square is about 1 hour or 15 degrees wide. It’s also nearly 15 degrees tall, so it provides an excellent reference for visualizing the celestial grid.

Other lines based on this grid are shown on the diagram. The top of the Great Square and Elnath (al -NAWTH) show the arc of +30 degrees declination, but we lack any markers in this part of the sky for -30 degrees declination. Notice that declinations are designated as positive for north and negative for south. Some representations of latitude also use this notation. The other meridians of right ascension shown are at 3 hours marked by Menkar in Cetus and 6 hours marked by the line from Menkalinan (men-CALL-ee-nahn) to Theta Aurigae (oh-REE-gay) .

The 6 hour meridian is one we northern inhabitants cherish as it also marks the summer solstice, the position of the sun on June 21. I think of Orion pointing to this position with his club to give us northerners hope through the long, cold nights of winter. Physically, this marks the northernmost position of the sun at 23.5 degrees north of the celestial equator. The angle is equal to the tilt of Earth’s axis from its orbit that gives us our seasons. It’s warm in the summer because the sun is high in the sky. On Saturday evening at 11:19 p.m., the sun will be at its southernmost position, the winter solstice, at a declination of -23.5 degrees. So those in the southern hemisphere have the sun high in the sky making for very warm days.

The volunteer astronomers of the Adirondack Sky Center and Observatory can help you visualize the celestial grid as they show you views of stars, nebulae, galaxies, and other wonders of our universe a t the Roll Off Roof Observatory (RORO) above Little Wolf Pond in Tupper Lake. We have public stargazing on the first and third Fridays of each month during the winter if it’s clear.

Please check our web site at https://www.adirondackskycenter.org and our Facebook page for updates on the weather and whether we will open . You can sign up for email updates on observing and, on our public observ ing days you can call the RORO at 518-359-6317 to talk with one of our astronomers.