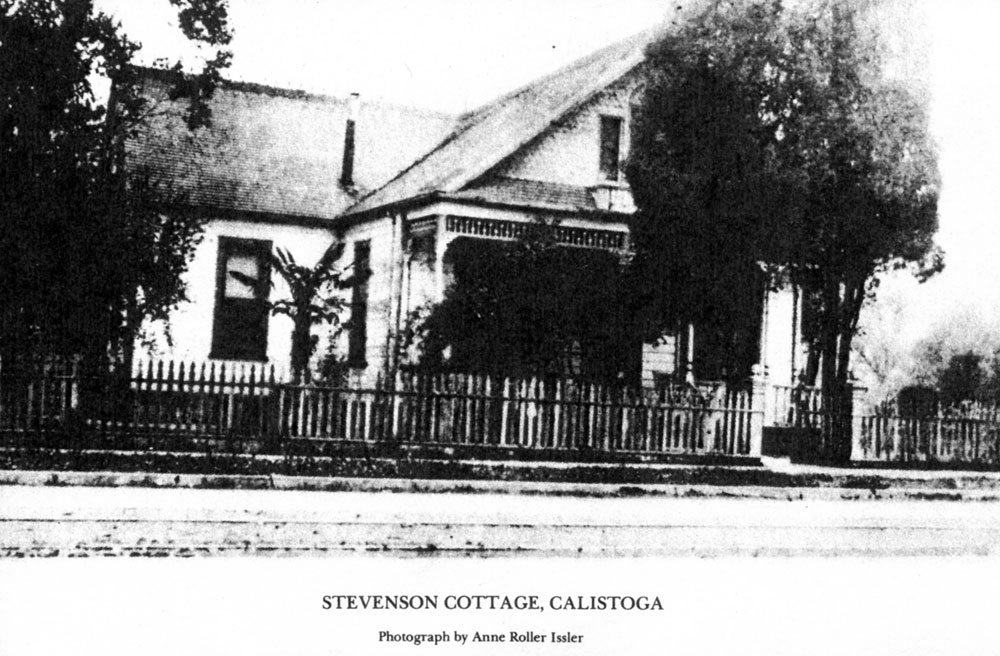 “I am homesick for Europe; yet it is now a question if I shall be strong enough for the journey home in the summer.”

Following their sick leave down in the valley, in a little white cottage on the green in the town of Calistoga, the ruling family of Silverado resumed their not-so-rightful place on the platform in front of the mine shaft that was blasted into the bowels of Mount St. Helena, which, at 4,500 feet, dominates Napa Valley in central California.

Robert Louis Stevenson and his wife Fanny, “the King and Queen of Silverado,” Fanny’s 12-year-old son “Lloyd, the Crown Prince,” and Chuchu, a setter crossed with a spaniel, aka “the Grand Duke,” had returned to their high domain with a guest. Joe Strong, an artist and Fanny’s son-in-law going on seven months, had unwittingly arrived just when the squatters’ situation on the mountainside required a hired hand or, even better, someone in the family who will work for nothing. Joe did the work and still had time to draw. One of his creations would make frontispiece for Stevenson’s fourth book, “The Silverado Squatters.”

One day Joe left for San Francisco and returned three days later with his wife Isobel, or “Belle,” and Fanny’s youngest sister Nellie Vandegrift, soon to be married to Adolpho Sanchez. In her book, “This Life I’ve Loved,” Belle takes her readers back to the day:

“Nellie came over and we three went to Silverado together. It was a hot trip; the journey by stagecoach up the mountain frightfully dusty, but when we reached the top the air was exhilarating.”

“The change in Louis was amazing; he was like a different man. We found him happily at work on his journal and was much cheered by letters from his father and mother who had written most affectionately, sending money and promising a cordial welcome to his wife and step-son if he would come home.”

“We had our meals out-of-doors and, as there never was a better cook than Fanny Stevenson, they were good ones. She used the mouth of the old Silverado mine for an ice chest and storeroom; here hung sides of venison, pigeons, wild ducks and other game purchased from friendly neighbours and in the chill shadow were cans of fresh milk brought up the mountain each morning.”

“Though my mother was an excellent nurse, she was not a fussy one. There was never any suggestion at all of Louis being an invalid, and everybody shared in the good things she prepared for him. About eleven o’clock in the morning and three in the afternoon we were all served with a rum punch, frothy with cream and delicately topped with a sprinkle of cinnamon.”

“In the evenings we sat round the campfire talking, but soon the chill that always came at night, even after the hottest day, drove us to our beds. The cabins were full of cracks, and the broken doors barely served to keep out wild animals. Often we heard the hysterical yip-yipping of coyotes, the bark of a fox, and an occasional terrifying scream that Joe said might be a wildcat, or even a mountain lion. However, with our valiant protector Chuchu on guard, we felt perfectly safe.”

And that’s how time passed for the happy campers at Silverado on the mountainside. Then one evening, “supper comfortably over, our guest busy at work on a drawing of the dump and the opposite hills, we were all out on the platform together … when the sound of brisk footsteps came mounting up the path … the tread seemed lighter and firmer than was usual with our country neighbours. And presently, sure enough, two town gentlemen, with cigars and kid gloves, came debouching past our house. ‘Good evening,’ they said.”

To cut to the chase, one of them was Mr. Ronalds, the owner of the Silverado mine, the same one to whom Mrs. Hanson had said, “laughing aloud with all her fine teeth. He could not find the mine to save his life,” without her husband, Rufe, to guide him.

The jig was up! “We, the lords of Silverado, had come face to face with our superior,” said the squatter-in-chief. “It is the worst of all quaint and of all cheap ways of life that they bring us at last to the pinch of some humiliation.”

It was time to go anyway. Belle finishes the narrative:

“After several weeks of Silverado, we all returned to San Francisco, my mother and Louis taking rooms in our building. They were very busy making preparations to leave for Scotland, and full of plans for the future. Lloyd was going with them, and if a good home hadn’t been offered to Chuchu, they would have taken him, too.

“We had some very pleasant times together before they left, and I remember coming through the hall, and stopping suddenly at a light joyous sound. With a catch at my heart, I realized it was the first time I had ever heard my mother laugh.”