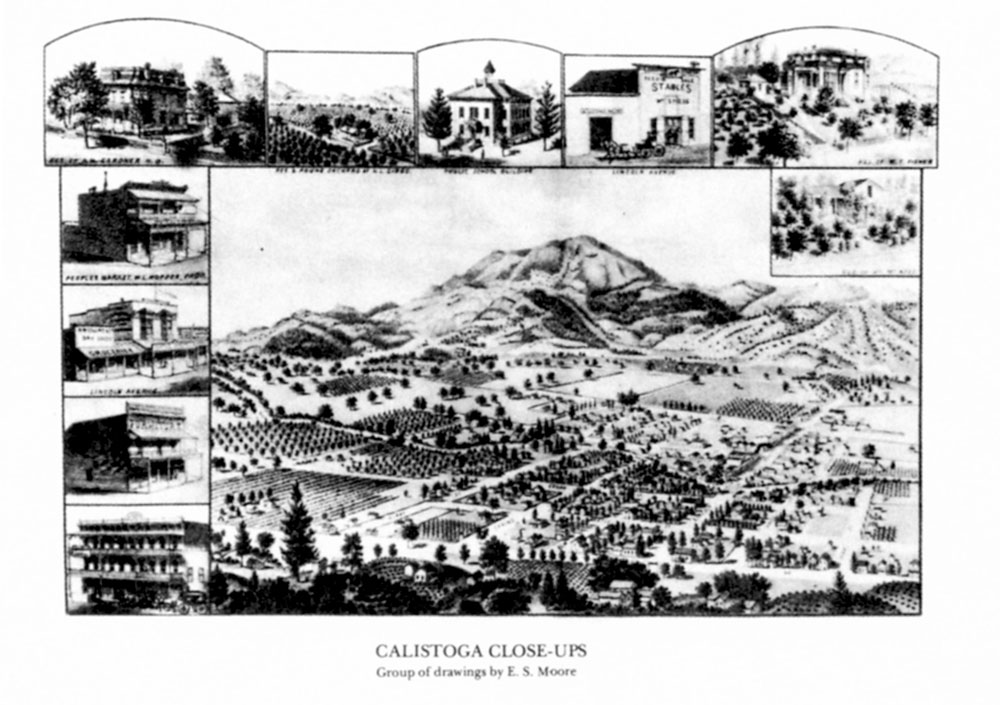 A day in the life for the royal couple of Silverado, namely, Mr. and Mrs. Robert Louis Stevenson, began with coffee on the deck to watch the sunrise.

In this case the deck was huge, 120 feet long, and triangular and was better known as the platform but “used as our summer parlour,” said RLS in his popular account of the couple’s honeymoon in California’s Napa Valley in the summer of 1880.

To get the weak lungs of the ailing author from Scotland above the harmful sea fogs that crept inland each morning from San Francisco Bay was the primary consideration when they chose the deserted Silverado mine halfway up the south slope of Mount St. Helena. Each morning the wisdom of that choice was confirmed. All the squatters had to do was look down and see a “whole opaque white ocean” fog smothering the valley floor. Louis wrote that “at Calistoga I had risen and gone abroad in the early morning, coughing and sneezing, under fathoms on fathoms of grey sea-vapour…a painful experience for the invalid. But to set aloft one’s self in the pure air and under the unclouded dome of heaven, and thus look down on the submergence of the valley, was strangely different, and even delightful to the eyes. Far away were hill-tops like little inlands.”

As each morning progressed that opaque white ocean would disperse beneath the rising sun to provide the beholders with a kingly view of their realm across forest and ridge, way beyond to the little country townships connected along the line of their little country railroad train. Their privacy was complete.

“None but the Hansons were our visitors. Even they came but at long intervals with milk. So our days, as they were never interrupted, drew out to the greater length; hour melted insensibly into hour; the household duties, though they were many, and some of them laborious, dwindled into mere islets of business in a sea of sunny day-time; and it appears to me, looking back, as though the far greater part of our life at Silverado had been passed, propped upon an elbow, or seated on a plank, listening to the silence that there is among the hills.”

King Louis would start his day before sun-up by lighting the fire that boiled the water to make the porridge and coffee. Getting the water was another chore and to get to the spring and back involved “staggering among the stones, and wading in low growth of calcanthus, where the rattlesnakes lay hissing. Yet I liked to draw water,” he said, “to dip the grey metal pail into the clean, colourless, cool water.” That’s not what he let his mother think from a letter dated June 30, 1880: “I am truly better; I am allowed to do nothing; never leave our little platform in the canyon, nor do a stroke of work.” Finding kindling for the next fire was the last domestic daily chore for the monarch of the mine.

Then came lessons for the Crown Prince of Silverado, Lloyd Osbourne, age 12 and stepson to the author. An inspiring teacher of Latin and geometry, RLS was not. In “The little corner near the forge, where we found a refuge under the madronas from the unsparing early sun,” Lloyd would politely humor his tutor to the end of each lesson after which he would immediately return to toying with his newest amusement, a toy printing press. No one could know it yet, but that press would travel with the royal family of Silverado all the way to the Swiss Alps. There Louis would put it to work when he tried his hand at carving woodcuts, eighteen of which have been enshrined at Baker’s in Saranac Lake for now over a century.

On the sixth day, diptheria came to spoil the party on the platform. “The queen and crown prince with one accord fell sick; and as I was sick to begin with, our lone position on Mt. St. Helena was no longer tenable, and we had to hurry back to Calistoga and a cottage on the green.” Lloyd’s case was slight “but Fanny has been pretty sick and a little lightheaded for forty-eight hours.” During this interlude on the valley floor, RLS had a reality check. “We had found what an amount of labor it cost to support life in our red canyon.” They needed a hired hand but could find no one in Calistoga desperate enough for money to live and work on a mountainside for such a strange group of squatters. “We were not, however, to return alone; we brought with us a painter guest.” Joe Strong, Fanny’s brand-new son-in-law and the artist who would draw the frontispiece for The Silverado Squattershad showed up for a visit at the right time to be drafted into service for the rulers of Silverado. He “proved to be a most good-natured comrade and a capital hand at an omelette.”

And so two Chinese men and their wagon were hired to haul the squatters plus one back to Silverado but complications delayed their departure until about 9:30 p.m. It was a fortuitous delay because the heavens happened to provide a spectacular light show that night as they made their way up the mountain that gave Louis more material for his pen, a piece he would call A Starry Drive. Finally they were all back on their platform. Lloyd, who had slept most of the trip, said that he was glad “to be home.” While they were gone, the place had been looted. “Wild cats, so the Hansons said, had broken in and carried off a side of bacon, a hatchet, and two knives.”