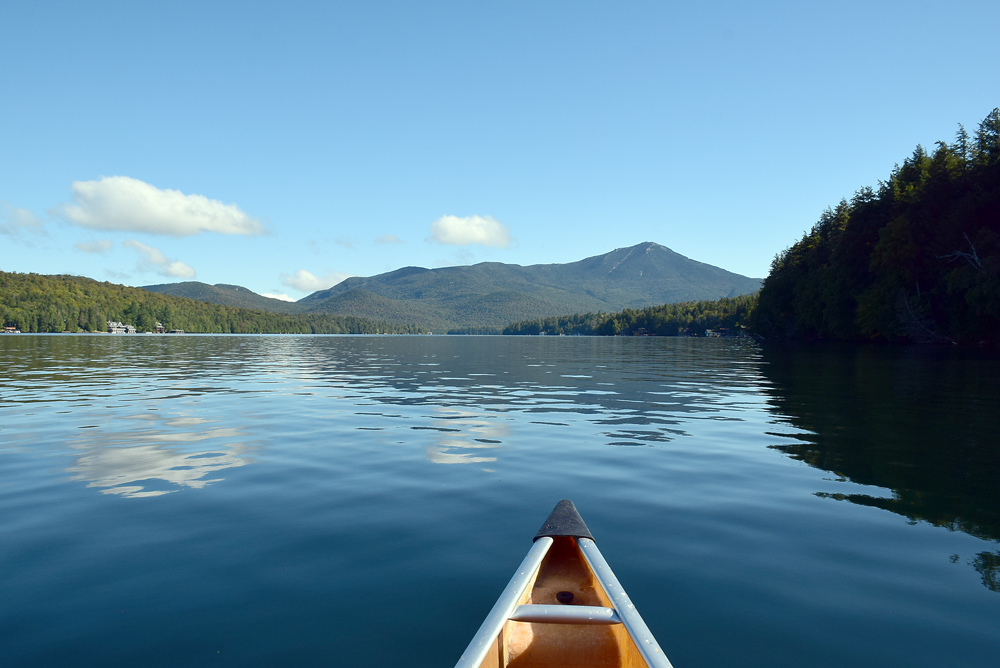 Whiteface Mountain, the fifth highest peak in New York, dominates the view from Lake Placid on a bluebird day in September. (Enterprise photo — Justin A. Levine)

It started back in June, when my friend Jason Labonte asked if I wanted to go paddle Lake Placid. I hadn’t been out on the Olympic village’s namesake in a long time, but the thought of paddling during the height of summer on one of the area’s most popular lakes was cause for concern.

So when our schedules didn’t jive for a couple months, I wasn’t too heartbroken. But then the day before a bluebird day in mid-September, I got a text asking if I was free. With a perfect forecast, we set out on the lake for half-day paddle.

Putting in at the Lake Placid boat launch is easy and convenient, and the watershed steward gave our canoe a quick check for invasive species. Jason and I paddled generally northeast from the launch with a plan to check out a couple of sites and then come back on the far side of the lake.

The water was crystal clear and almost perfectly still as we made our way into the shadows of Pulpit Rock, noticing a small piece of flagging that marked the unofficial landing off to the side of the sheer cliff.

As soon as we got past the cliffs, Whiteface Mountain came into view. The fifth-highest peak in the state completely dominates the view at the northern end of the lake, and with hardly a cloud in the sky, we enjoyed looking at the mountain, its slides and the “castle” near the summit, which was visible with the naked eye. 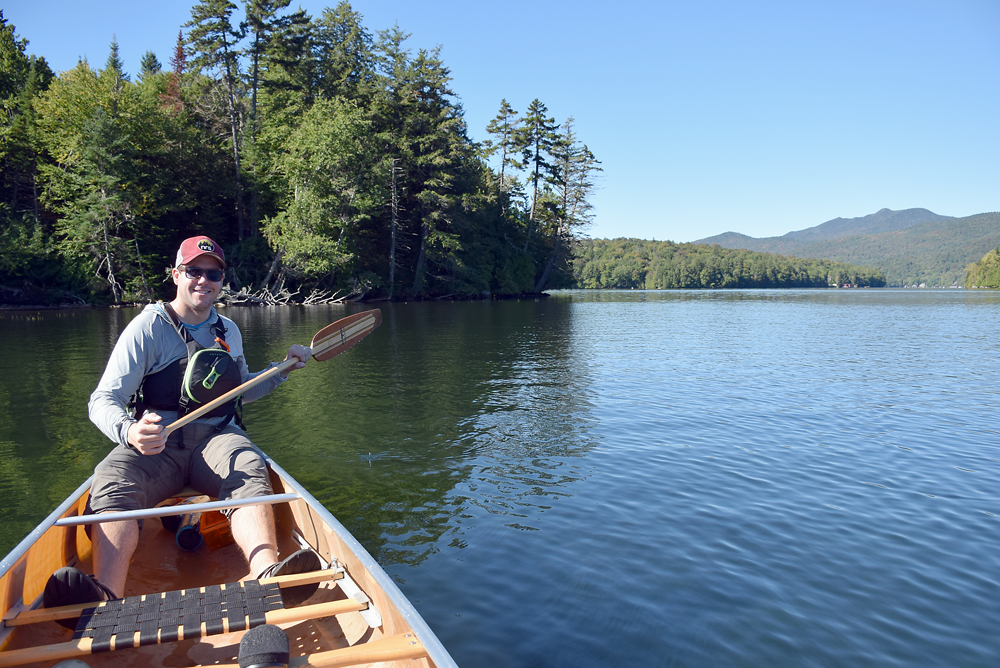 We wanted to find Whiteface Landing, which is the start of a trail that goes to the summit of Whiteface from the shore of the lake. But when we got to Barrel Bay, all we saw was a huge dock with an old Crisscraft wooden boat — “Boytoy” — tied to it. We thought for sure that it had to be a private camp. But after watching a pair of paddlers approach and then disappear, we went and investigated only to find the dock was actually not private.

We got out of the canoe and took a quick break at the landing, enjoying a still-icy cold beverage and a few snacks. From the landing, we went north around little Hawk Island and then swung south to check out the state’s backcountry campsite at the tip of Moose Island.

Rounding the point on Moose, Jason and I were thrilled to see a sandy bottom to the lake at the campsite, which has two lean-tos. We hopped out of the boat and immediately jumped in the water, as the sun was high overhead and plenty hot.

After cooling off with a dip in the lake and exploring the campsite area, we got back in the canoe and went north to follow the opposite shore on our way back to the launch. The houses and camps were fun to look at, even though neither of us could afford to buy anything we saw.

As we reached the far tip of Eagle Island, we detoured a bit to go over to Gull Rock, which, of course, had a herring gull just hanging out on it. McKenzie and Moose mountains loomed large in the background, and we saw a couple of motorboats coming and going from the launch.

Jason spotted a large bird, and hoped it was a bald eagle. He was slightly disappointed as an osprey flew about 20 feet overhead, but got more excited when a bald eagle followed the same path just a minute later. If it wasn’t for their leisurely pace, I would have thought the eagle was chasing the osprey, but it seemed like they just happened to be flying the same direction.

Back at the boat launch, we were thrilled with the quiet time we had on Lake Placid. Getting to enjoy summer-like weather with the quiet waters of fall made for a perfect trip.