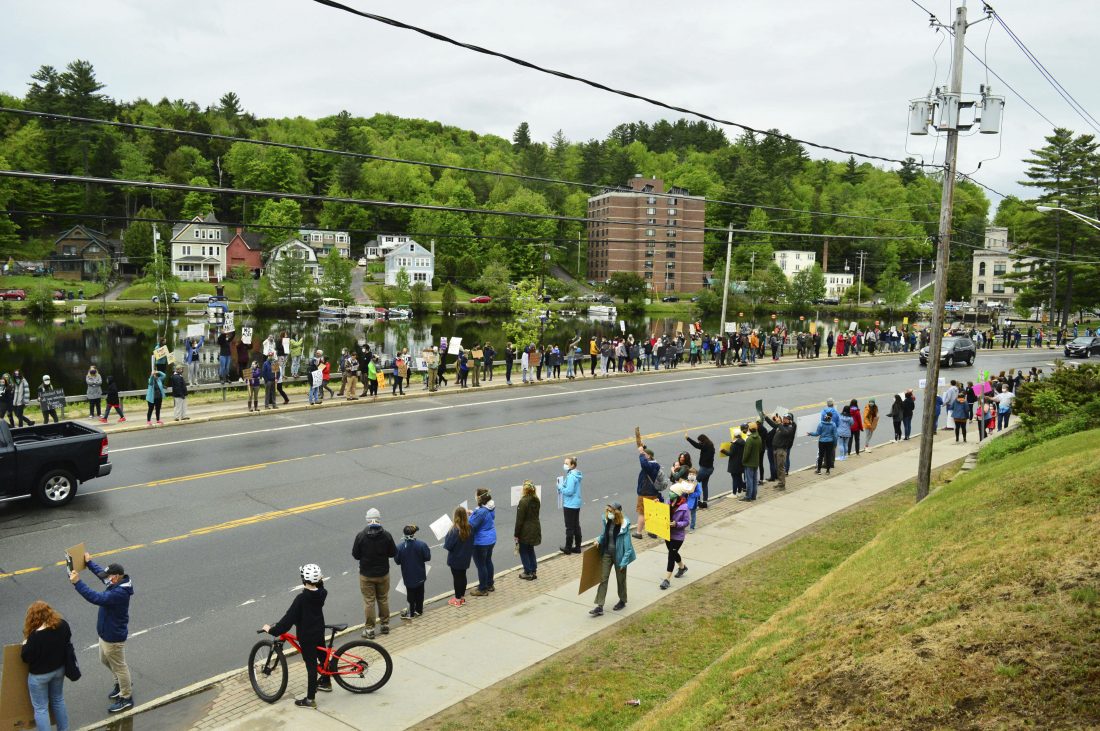 SARANAC LAKE — Police charged a local 19-year-old who they say posted on Snapchat that he might shoot protesters rallying against police brutality and racism, accompanying his words with a photo of himself holding a gun.

New York State Police say Rylan Christy made the post May 31, but it came to police’s attention three days later on Tuesday afternoon, just as hundreds of people were gathering for a rally in Saranac Lake’s Riverside Park. These people, like others around the nation, were protesting a white Minneapolis police officer’s alleged murder of George Floyd by pinning the unarmed black man’s neck to the pavement for 8 minutes and 46 seconds, as well as other killings of black people by police nationwide. Many such protests in other areas have gotten violent, but many others, including those in Saranac Lake and Keene, have not.

State Police Troop B spokesperson Trooper Jennifer Fleishman said Christy’s post “was targeted toward violent rioters and looters, not the peaceful protesters at the demonstration in Saranac Lake.

“This was an isolated incident,” she added. “There is no threat of harm to the public.”

It’s not just Christy, though. On Facebook, the Enterprise has seen at least two people threaten to shoot protesters who get destructive or violent: one at the Saranac Lake protest and at one at a similar rally set for Monday evening in Tupper Lake’s Municipal Park.

“We investigate every sort of perceived threat that is reported to us, so this will be investigated,” Fleishman said after the Enterprise showed State Police these Facebook posts.

State Police said they charged Christy with third-degree falsely reporting a crime, a class A misdemeanor. They charged him under a subset of the law that falsely reports a “crime, catastrophe or emergency.”

Snapchat is more private than social media such as Facebook, Twitter and Instagram, and people’s Snapchat messages are not necessarily open to the public. It was not clear whether Christy’s post in question was made to select individuals or was part of a story, which is visible to all of one’s Snapchat friends. Snapchat posts generally disappear shortly after being opened, but recipients can save them.

Someone saved this post and reported it by phone to the Saranac Lake Police Department around 4:30 p.m. Tuesday. At that moment, people were already starting to show up for the rally, which was scheduled for 5 to 7 p.m. and ended up drawing roughly 500 people.

“The first thing we did was put extra staff on immediately to have more patrols for public safety,” village police Chief James Joyce said Wednesday. Before he even saw the Snapchat post, he increased staffing from two to five, including himself. He also asked State Police to send officers to the scene, which they did.

Fleishman said State Police contacted Christy, and he came down to the Troop B barracks in Ray Brook, where they charged him.

He was issued a ticket to appear at a later date in Franklin town court, since he allegedly made the post from that town. Although State Police said his address is listed as Saranac Lake, they said he lives on Franklin County Route 55, which runs between Bloomingdale and Gabriels, in the town of Franklin.

Police declined to share the post with the Enterprise, but they described it in a limited fashion.

“It was a post of an individual holding an AR-style rifle,” Joyce said. “The post did not show the individual’s face.”

State Police, in a press release, said the photo was of Christy himself.

“It was alarming, of course,” Joyce said. “I think any conscientious law enforcement officer would have taken that post seriously and would have began an investigation into it.”

“The post that he made was more targeted toward … the prospect of violent protesters,” Fleishman said.

Village and State Police both said it does not appear anyone other than Christy was involved, but they declined to explain how they determined that.

“This remains under investigation, and we are not revealing evidence in this investigation to the public,” Fleishman said.

At the protest rally, Joyce said he and other officers were on the lookout for conflicts, but none emerged.

“Nothing took place that caused us to deal with anything at the protest itself,” he said. The worst incident was a man who gave protesters the finger as he drove by, he added.

People were packed into the park, clearly violating a state ban on large gatherings as well as requirements that people stay 6 feet apart from each other, all meant to slow the spread of the COVID-19 pandemic. The vast majority of them wore masks, however, which is a preventative measure.

“The social distancing did appear to fall apart,” Joyce said, but he said it would have been impossible to uphold that requirement with a handful of village police officers. He compared it to managing crowds at Saranac Lake’s annual Winter Carnival parade, July 4 fireworks or Can-Am Rugby Tournament.