No fireworks in Saranac Lake this July 4

Village board makes decision out of concern for coronavirus spread

People gather around Lake Flower in the village of Saranac Lake before the fireworks show begins on July 4, 2019. (Enterprise photo — Lou Reuter) 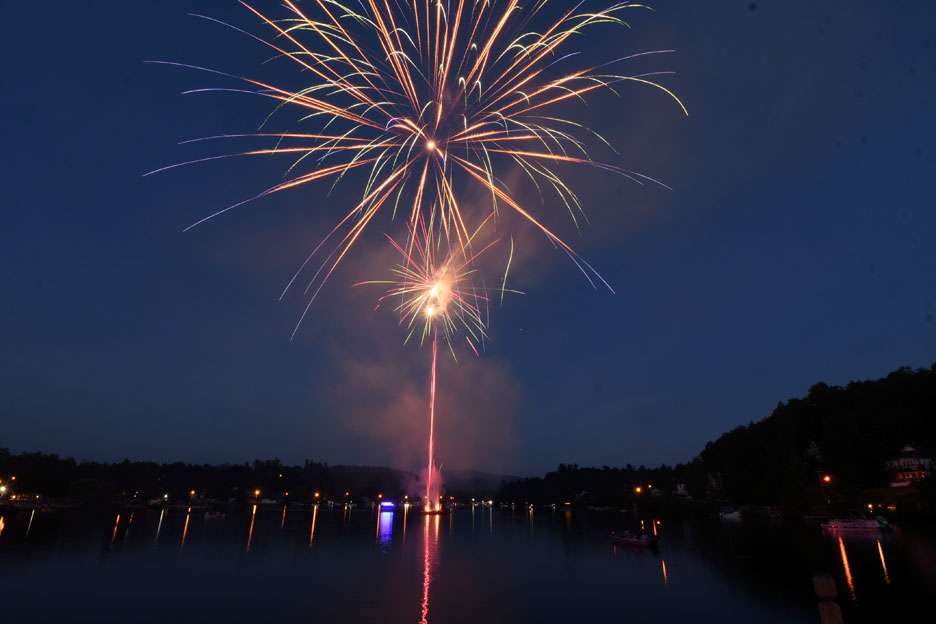 SARANAC LAKE — A crack of thunder echoed through every unmuted microphone on the Zoom meeting Monday just as the Saranac Lake Village Board of Trustees began talking about whether to have fireworks this Fourth of July.

Whether you call it an omen or just irony, the decision that followed was big enough to warrant the meteorological punctuation: The trustees agreed not to hold fireworks this Fourth of July, so as not to spread of the novel coronavirus among the hundreds of people who typically gather around Lake Flower to watch the pyrotechnics.

The question of this year’s fireworks has been high in people’s minds here. In late May, village Clerk Kareen Tyler told the Enterprise, “Out of all the phone calls I get, that is the number-one question: Will there be Fourth of July fireworks?” The Enterprise has also received numerous inquiries. No answer could be given, until now.

Board members had authorized a $10,000 contract with Santore’s World Famous Fireworks in late May but had not yet decided whether to go through with the event. They waited right up until the last minute; village Manager John Sweeney said he had to tell Santore’s by Tuesday whether it needed to order product.

Sweeney said Tuesday morning that the fireworks will be “postponed to a future date within one year.” Santore’s manager Jeff Ward said his company is negotiating with village officials for a postponement date, possibly on Labor Day weekend. 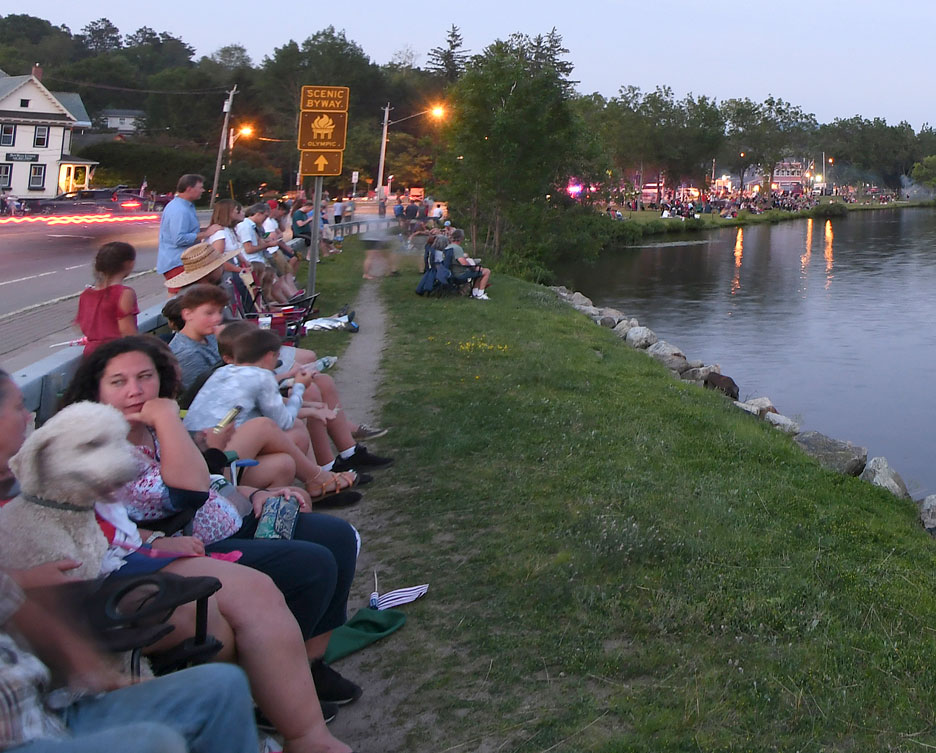 People gather around Lake Flower in the village of Saranac Lake before the fireworks show begins on July 4, 2019. (Enterprise photo — Lou Reuter)

The contract allows the fireworks to be postponed if both the village and the company agree. It also allows a 50% refund if the fireworks are canceled “due to inclement weather or other acts of God,” but the village would have to pay the full price if they are canceled for other reasons. Nevertheless, Ward said he doesn’t want to stick it to Saranac Lake. He said he understands that both the village and his company are going through a period of hardship, and he wants a deal they both agree on.

“If the time comes and it has to be canceled, we’ll work out a fair an equitable (compensation),” he said.

Trustee Tom Catillaz, who at an April 27 board meeting was in favor of having fireworks, was the first to speak on the topic Monday. He had changed his mind.

“Unfortunately, I think it might be time to cancel,” he said. “We don’t know if we can have them. … The crowd control, I don’t know how we’re going to handle that situation.”

Trustee Melinda Little said she “very much” agreed with Catillaz.

Trustee Rich Shapiro said current state rules don’t allow gatherings of more than 25 people, so the village would need outside permission before hosting an event that would draw far more than that. Also, he said, “There’s no way to enforce any social distancing.”

He also added his personal view: “If we have 500, 800 people down there watching the fireworks, I wouldn’t go anywhere near there.”

Trustee Patrick Murphy was absent from the meeting, but the other three trustees’ stances sealed the five-member board’s majority. He wrote Tuesday by email, “though I am disappointed we cannot host a traditional fireworks display for 4th of July, I understand how my fellow board members came to their decision and respect their decision.”

Mayor Clyde Rabideau typically does not vote except to break a tie, but he announced the board’s conclusion: “We’ll regrettably cancel the fireworks on the Fourth of July, which has been a longtime tradition.”

He jokingly recalled that when he first became mayor, Catillaz warned him to never move the Independence Day fireworks to a day other than July 4. Catillaz said that once when he was mayor, the village moved them to July 3 (he did not state the year, but this was done in 2005) and he was “roasted” afterward by Veterans Club members.

“It was probably the biggest error I ever made as mayor,” he said Monday.

He didn’t remember, however, that the village canceled fireworks altogether on July 4, 1999, also when he was mayor. The fireworks company said at the time that the village had requested bigger mortars than the space would allow, but village officials gave a different story, saying the company had told them it couldn’t use smaller ones and therefore couldn’t do the village’s show. Meanwhile, the chamber of commerce director blamed it on the lingering wake of a lawsuit by a woman who stepped in a hole and was hurt during the 1993 Independence Day fireworks in Saranac Lake.

Canceling the fireworks drew dozens of comments on the Enterprise Facebook page, mostly against the decision. Many said it was unfair considering that other large gatherings are being allowed, such as protests against racism or the Ironman Lake Placid triathlon. Many argued that COVID-19 is no more dangerous than the flu or the common cold. Some said they would shoot off their own fireworks.

“100’s of protesters elbow to elbow, for the last 3 weeks. Yet no spike in cases. But cancel our celebration of independence. Unbelievable,” Josh Colby wrote.

“That’s really a shame,” wrote Bernadette Dutka Hanson. “I’d have thought that families safely distancing, and wearing masks, while outdoors and looking up into the sky, would have been pretty darn safe. It would have been SOMETHING to look forward to for everyone.”

Jacob Vennie-Vollrath had a different suggestion. “Move it out to Tucker Farms like the outdoor movie and everyone can watch from their cars safely socially distanced,” he wrote.

Some people said they don’t like fireworks anyway because they are too loud, scare animals and veterans, pollute water can be a fire hazard. In a measured defense of fireworks in general, Peter Henry, who sets off Saranac Lake’s fireworks every Winter Carnival, posted about the history of fireworks in human celebrations.

“I am very sorry to hear Saranac Lake decided to cancel their July 4th fireworks show, but I can appreciate the reasoning behind it. I’m sure it was not an easy decision on the board’s part,” he wrote.

“For the most part, fireworks make people happy and bring joy and smiles to their faces during a show. The irony of all this is that after being cooped up and practicing social distancing for almost 4 months, the people of the North Country have earned a reason to celebrate right now, not only keeping the virus at bay in our area, but also our freedom as Americans.”