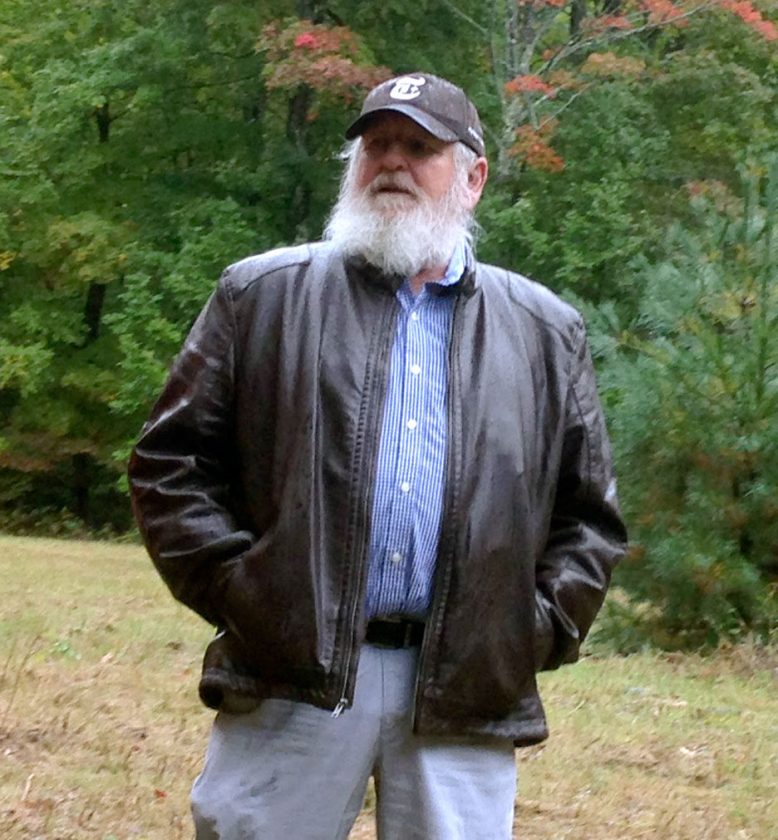 Perry White is seen in October 2018, around the time of his retirement from the Watertown Daily Times, in Elizabethtown. (Enterprise photo — Peter Crowley)

WATERTOWN — Sharing a name with one of America’s best known fictional editors, Perry White may have been destined for a long career in the newspaper business.

White, whose 42 years in journalism culminated as the managing editor of the Watertown Daily Times, died Saturday of cancer in Albuquerque, N.M., to where he had moved following his October 2018 retirement from the Times.

True to form, White, 68, managed to break the news of his own death through a posting on his Facebook page.

Appearing gruff and often obstinate, White had the soul of a poet, dedicating much of his career to mentoring young reporters, many of whom have risen to some of the top news outlets in the country.

“Superman’s boss, also known as Perry White, was a mentor, a friend and a colleague. I will miss him dearly,” said Michael B. Pell, a former Times reporter who now reports for Reuters News in the New York City area.

Pell said he worked with White for a little over four years as a rookie reporter at the Times from 2002 to 2006. He said White modeled a strong knowledge of municipal government, strong ethics and a drive to always do one’s best, no matter if a reporter was writing a 30-word local paragraph or a front-page cover story.

“He was wicked, salty and rough, often cutting to the bone,” Pell said. “Any reporter who didn’t fear him a little, was just too dumb to sense the train barreling down the tracks. I loved that about him.”

Pell recalled working weekends at the Times, when White would enter the newsroom in cut-off jean shorts, “knocking out the dottle from his pipe and chatting me up over a cup of coffee.” He said once, after handing in “a particularly lazy piece of copy,” White sent him a single-line message, taking Pell to task and expressing his disappointment “that I didn’t expect more from myself.”

“It was a lesson in pride I still think about nearly two decades later,” Pell said. “Behind the acerbic wit and the gray beard flecked with tobacco, Perry was sensitive and kind. I loved that about him as well.”

Daniel Flatley, a Times reporter from 2012 to 2015 now working for Bloomberg News in Washington, D.C. remembered White as “an intimidating presence in the newsroom.”

“He was when I first arrived and he was when I left,” Flatley said. “He rode me hard when I was just starting out, warning me that he would “piss in your gas tank” if I insisted on repeating whatever egregious error had caught his attention. I lived in fear of him for about six months and then, one day, that fear began to subside.”

Flatley said over time the relationship changed for reasons he is still not certain. The fear diminished, possibly as Flatley’s writing improved under White’s tutelage. Eventually, White offered to let Flatley write a column for the paper and gave him greater leeway on stories. However, Flatley said he “still felt the need to impress him.”

“Perry was much smarter and savvier than his gruff exterior might lead one to believe,” Flatley recalled. “He knew something about everything and much about the arcane workings of local government. In an era when breaking into journalism can require a fancy degree, Perry was one of the last autodidacts. He taught himself almost everything he knew by study or experience. I remember always coming away impressed by the breadth and depth of his knowledge. He had the mind of a professor trapped in the body of a truck driver or an oil-patch roughneck.”

He described White as “earthy,” known for the cut-off jean shorts and flannel shirts. He also described White as “fearless in his columns” and outspoken when it came to issues of press freedom and, occasionally, the “stupidity” of local government officials, using a word favored by White.

“Perry had the talent and ability to work at any newspaper in the country, but he choose to work at local publications, in part, I think, because he felt that’s where he could have the biggest impact,” Flatley said. “He taught, mentored and influenced scores of reporters and editors in his time and that’s no small accomplishment. He was a man of immense heart and talent and will be missed.”

Marc Heller, who began reporting at the Times’s Watertown office in 1993 and served as the Times’s Washington, D.C., correspondent from 1997 until the office was closed in 2012, said he stayed in contact with White through the years as he continued his journalistic career, now at E&E News in Washington.

“What I appreciated about Perry was his sense of humor, his laugh, his appreciation for good writing and his authentic, down-to-earth nature,” Heller said. “He wasn’t exactly easy on reporters, which was a reflection of journalistic standards. He helped a good number of reporters build thicker skin.

Heller said, like many editors, White spent a big chunk of his career at the Times and became part of the community.

“Over the years, I’ve come to appreciate more and more how valuable that was — and how much I’ve missed working alongside people like that,” he said. “What I appreciated most, maybe, was how I was always welcome back in his office on my occasional visits back north, and how glad he sounded when I called from time to time to offer a tip on something I’d heard in the Capitol that might affect the north country.”

John B. Johnson, former CEO of Johnson Newspaper Corp. and publisher of the Times, said White had high expectations and didn’t let being in a small market deter him from his goal of producing world class journalism and great journalists.

“As a result, he pushed his staff, his photographers, and his publisher not to accept a mediocre story,” he said. “He also pushed himself, and his weekly column was sharp, insightful, and provocative. It was all the things you want from a crusty, cranky, shorts-wearing editor with spindly legs and a full wiry beard. That beard was pretty special and my dog, who often came to the office, loved to find crumbs of breakfast in it. Perry happily bent down, made eye contact and the two of them smiled.”

Johnson said that with a name like Perry White and a Twitter handle of @Kentsboss, White was grounded in culture, a strong sense of self and in reality. He knew that the model for news had to change, and he was the architect behind shared news resources within the corporation’s publications and outside to publications ranging from Glens Falls to Plattsburgh. He said this vision provided detailed and broad coverage of issues facing the 21st Congressional district making readers in that district very aware of key issues.

“As his publisher and his news partner, I looked at Perry as a mentor, a teacher, a friend and someone I could count on to usually disagree vehemently,” Johnson said. “In those arguments, we found a stronger position for the paper and out of that came a stronger story. Over the decade we worked closely together, he cared deeply for his staff, he loved our readers and he cherished telling the truth, no matter how hard it was to hear it.”