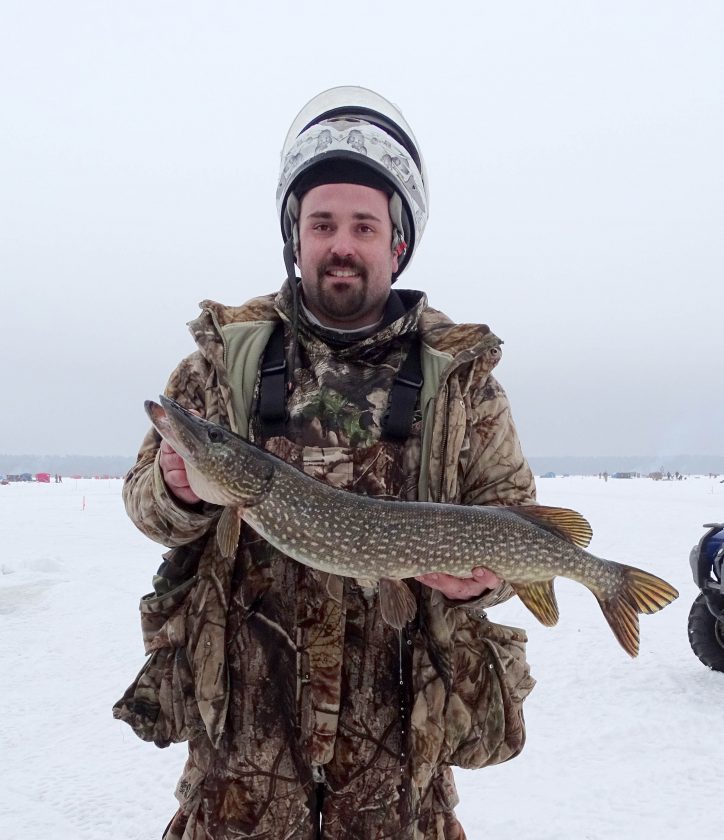 TUPPER LAKE — This year’s Northern Challenge Fishing Derby brought in record numbers of anglers and one surprising catch: an eel.

The Tupper Lake Sports Club’s annual event brought 1,448 people out on the ice of Simon Pond — also known as Lake Simond — on Saturday to catch a total 225 pike.

While the contest is focused on pike catches, one contestant had to share his catch with others, calling people over to see the 1.5 inch-diameter, 24-inch eel he pulled from the icy water.

“Mike Savage (the Sports Club Secretary) has lived here for 71 years and (he said) he has never heard of an eel coming out of Simon Pond or any of the tributaries of Tupper Lake,” McMahon said. “None of the locals have ever heard of an eel being in there.”

Michael Willett, an avid fisher of Tupper Lake waters in summer and winder said he has never heard of someone catching an eel in the area.

“It’s definitely a first,” he wrote in a Facebook message.

Despite the large crowd numbers, this was a year of small fish. The largest, a 7.21-pound pike, was caught by a man named Josh Love in the 10 a.m. hour. McMahon said this is a good size fish for the pond, but previous years have seen double-digit weight pikes pulled in.

With the large crowds, McMahon said parking is becoming an issue with limited lots. He said the Sports Club is considering buying lots to make more parking room. He thanked the State Police and state Department of Environmental Conservation for their help with crowd control.

DEC issued two tickets, one for an unlicensed fisher and another for an unregistered vehicle.

The Tupper Lake Volunteer Fire Department and the rescue squad were called when at around 5 a.m. three people broke through the ice. McMahon said they were walking over where the Raquette River enters the pond, past barriers set up on the ice. The ice is thinner there because the water is moving.

"Luckily, some other fishermen who were right there actually helped pull them out of the water and got them back into their shacks where they could get warm," McMahon said.

He said one man was transported to Adirondack Medical Center in Saranac Lake and that the other two got changed and were back out on the ice.