From down under to the North Country 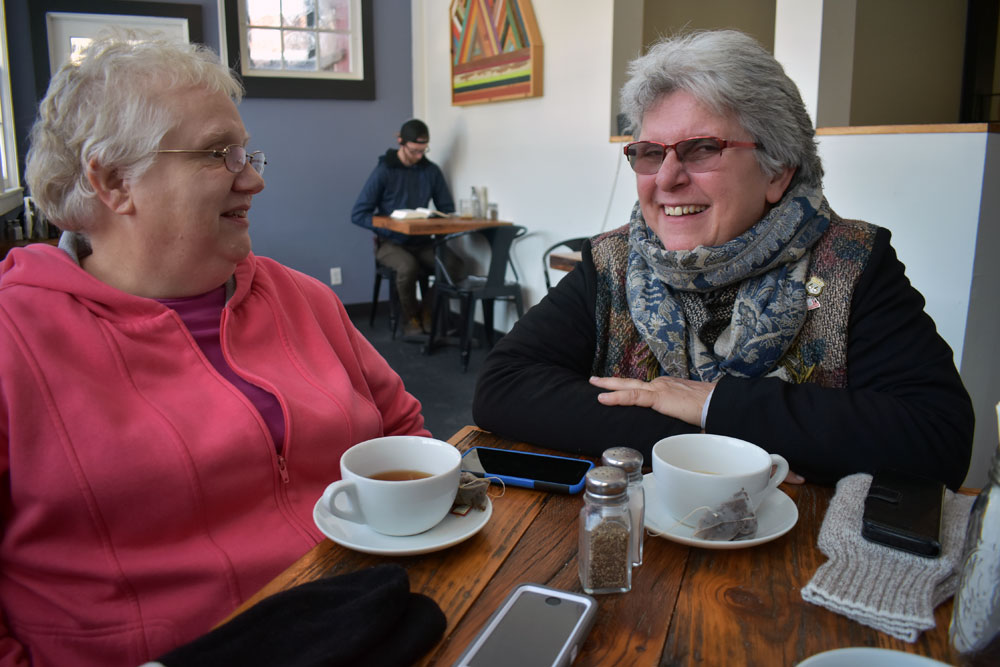 SARANAC LAKE — Jan Cannon-Ladhams bought two cups of tea: one for herself and one for her lifelong friend Susan Steen. Cannon-Ladhams put milk and sugar in hers — the Australian way — and Steen kept her tea black — the American way.

Steen and Cannon-Ladhams met as little girls, became pen pals when Cannon-Ladhams went back to Australia, and after 51 years, the two finally reconnected in person this past week.

“When I arrived a few days ago, I instantly knew which person was Susan even after all this time of not seeing each other,” Cannon-Ladhams said.

“People come into your life, and some of them leave,” she continued. “Some people you only meet for a season, but you never know who’s going to be a friend you keep forever.”

Steen grew up in the North Country, a place of tall trees, wild rivers and lots of snow. Cannon-Ladhams grew up down under in an environment she describes as red and dry. Right now, the temperature in Australia is reaching the low hundreds, a vast difference from the below-freezing temperatures of Saranac Lake.

The two originally met at a dairy farm picnic in Rensselaer County in the summer of 1968. Steen was 8, and Cannon-Ladhams was 9. Cannon-Ladhams was living in New York temporarily while her father taught courses at Rensselaer Polytechnic Institute in Troy. The two quickly became friends after discovering they shared a Nov. 11 birthday, but it was short-lived because Cannon-Ladhams went back to Australia at the end of the summer.

They committed to keeping in touch through letters.

“Susan was a much better correspondent than me,” Cannon-Ladhams said. “She was the one who kept this thing going, really.”

Cannon-Ladhams said she has kept every hand-written letter she’s ever received in a scrapbook back in Australia.

The two wrote back and forth about three or four times a year for the next eight years. Then the letters stopped.

“When you’re in your late teens and early 20s, you’re having fun and kind of forget,” Steen said.

Steen and Cannon-Ladhams were entering college and the workforce at this time. It became difficult to keep up. Steen went to college to get her Ph.D. in anthropology and later taught at multiple colleges in Canada and the U.S., and Cannon-Ladhams became the first female commercial FM radio announcer in Australia. She eventually took a job as a school teacher, as well, so she could spend more time with her children.

“I’ll admit it: I was a wild child. I went off and did rock ‘n’ roll and had a great life,” Cannon-Ladhams said. “In the state that I lived in, we often broke the hits. Internationally famous people would come to Western Australia, which wasn’t often, but when they did, it was always to my radio station.”

Cannon-Ladhams moved into her own home in the late ’90s, and while she was unpacking and tidying up, she found Steen’s letters.

Steen eventually got the letter after a series of mailing and re-mailing.

“She wrote a letter to my old address in North Bangor,” Steen said. “It ended up in my oldest brother Allen’s mailbox in Brushton. The post office people knew I was related to Allen, so they sent it his way and he sent it my way.”

“We just picked up where we left off,” Steen continued. “It felt like nothing had changed.”

Through letters, the two discussed relationships, family, politics and education. Both taught math for a time, and trying to find new ways for kids to understand numbers was an important topic in their letters.

“I was teaching stats and math, and we had a lot of kids who couldn’t do math in their heads,” Steen said. “It was a shame that here in the U.S., a world-leader country, we have kids graduating from high school who cannot do simple math.”

After more than two decades, the two finally planned a trip for Cannon-Ladhams to come visit.

“America tends to get a bad rep in the TV news and media in other parts of the world,” Cannon-Ladhams said. “So I was a little nervous about coming over because of guns and all that other stuff, but the people are awesome. They’re beautiful. They’re friendly and kind. I’ve really had a great time.”

Currently, Steen cares for her elderly parents, so she said it’s difficult to find the time for a trip to Australia, but she’s already looking a decade ahead for her and Cannon-Ladhams’ next meet up.

“Maybe in 10 years, we can celebrate our 71st and 72nd birthdays in Australia,” Steen said.