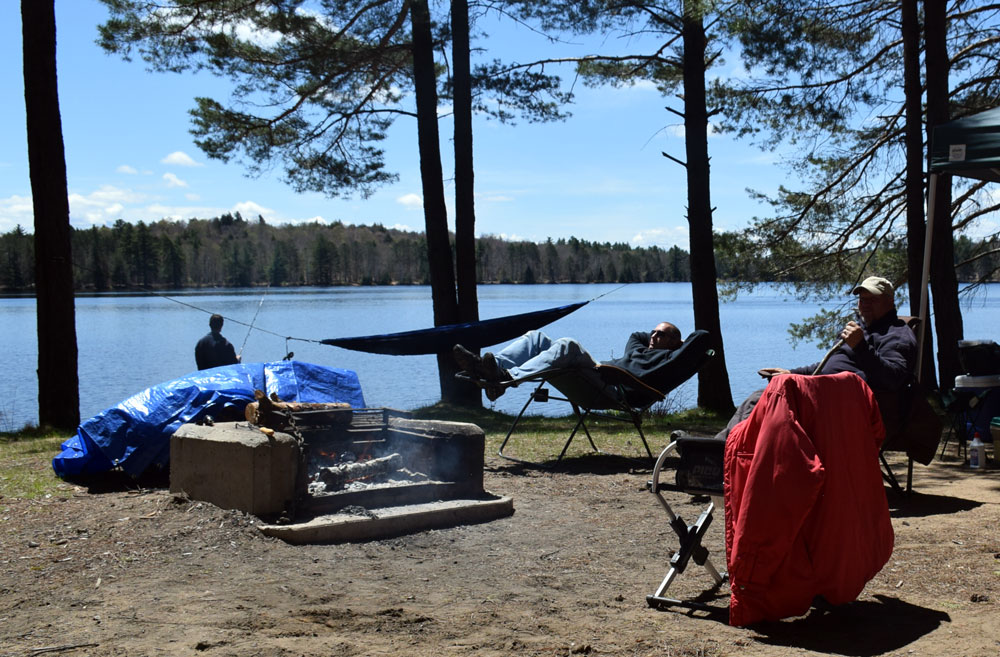 Men relax at a campsite at Fish Creek Campground in May 2016. (Enterprise photo — Justin A. Levine)

New data released by the state Department of Environmental Conservation show 2,776 fewer visitors chose to stay overnight this year at the 44 Adirondack campgrounds managed by the department, but those who did stay decided to camp here for slightly longer periods.

Altogether, 983,349 visitors stayed overnight at DEC campgrounds, according to the department. A total of 986,125 people stayed last year. These figures do not include people who visited for the day but did not stay overnight.

The slight decrease in overnight stays comes despite the state opening a new DEC-managed campground in North Hudson. The Frontier Town campground, equestrian and day-use area — a project in southern Essex County spurred by $19 million in state funding through NY Works — was open June 28 through Columbus Day weekend this year. According to the DEC, in that period the department received 852 reservations and altogether, 5,321 people camped there.

Although there were fewer visitors, the total number of days DEC campgrounds were occupied rose by nearly half a percent, and the number of reservations received by the department rose slightly, from 92,118 last year to 92,395 this year.

According to DEC spokeswoman Erica Ringewald in Albany, the average length of stay at the department’s Adirondack campgrounds is 3.33 nights.

The most popular campground, based on total site use and visitation, is Fish Creek Ponds in the town of Santa Clara, according to DEC spokesman David Winchell in Ray Brook.

The department also manages eight campgrounds in the Catskills.

In the North Country region, state parks saw 151,833 overnight stays this year. Most state campgrounds in the Adirondacks are managed by the DEC.

OPRHP’s 68 campgrounds and 8,555 campsites statewide were occupied for 680,533 nights this year through Columbus Day, up from 663,953 in the same period last year, according to Cuomo’s office. The number of nights the campgrounds were occupied was calculated by multiplying the number of visitors by the length of their stay.

In a statement, Cuomo attributed the uptick to a 50% discount on fees announced in August in the wake of record-high water levels in Lake Ontario and the St. Lawrence River.

“This incredible surge illustrates how our efforts to promote and revitalize our campgrounds are working, drawing visitors and increasing tourism to the flood-affected areas of Lake Ontario and St. Lawrence,” Cuomo said. “This rise in visitors experiencing the beauty of our State Parks are not only enjoying a day in nature, but driving economic activity in every corner of this great state.”