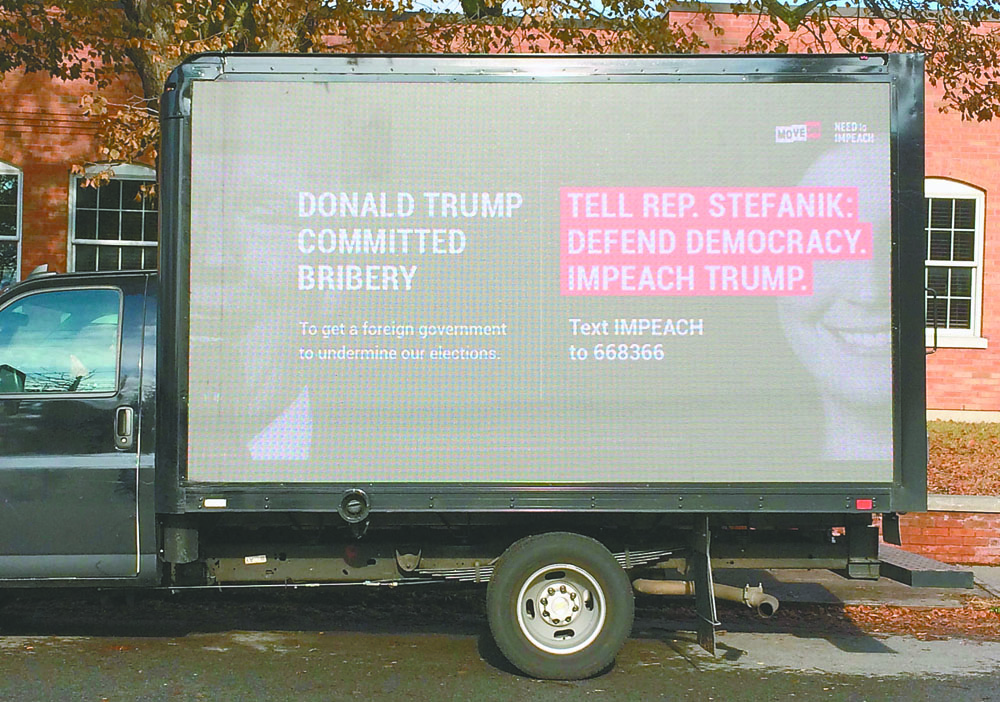 A truck with this “Impeach Trump” electronic sign was hired by MoveOn and parked outside The Post-Star office on Monday morning in Glens Falls. The truck was moved along by City Code Enforcement Officer Kris Vanderzee because no temporary sign permit was obtained. (Michael Goot, The Post-Star)

GLENS FALLS — A truck carrying an electronic sign with a message from MoveOn and Need to Impeach, asking U.S. Rep. Elise Stefanik, R-Schuylerville, to vote to impeach President Donald Trump, was parked outside The Post-Star on Monday morning, until a city official told it to move because the operator did not have a temporary sign permit.

The truck was parked on Lawrence Street in front of the paper’s office, beginning at around 8 a.m. until 11:15 a.m., when city Code Enforcement Officer Kris Vanderzee showed up and informed the driver no temporary sign permit had been obtained.

The city requires organizations to obtain temporary sign permits and pay $25. Political signs are limited to a maximum of 6 square feet and can be placed only on private property.

The political groups MoveOn and Need to Impeach want Trump impeached for holding up aid to Ukraine unless the country committed to investigating former Vice President Joe Biden and his son Hunter’s business dealings.

Need to Impeach was founded by billionaire Tom Steyer, who is running for president as a Democrat.

“We placed the billboard in front of The Post-Star office to let local media know that MoveOn members and constituents of New York State District 21 do not support Rep. Stefanik’s loyalty to Donald Trump,” according to a statement from MoveOn.

Vanderzee said in a follow-up conversations he got a call from the assistant to the mayor’s office after someone had complained.

When asked why this was considered a sign, but somebody advertising their business on their vehicle is not, Vanderzee admitted it is a gray area.

“They’re advertising on their car. It’s a registered vehicle,” he said.

Vanderzee said the driver of the truck was a subcontractor doing the job for a Nebraska-based company.

“We’re not trying to infringe upon rights of anybody, but that truck was parked there (and) its sole purpose was to be a sign.”

Vanderzee added that the truck was blocking a fire hydrant as well.

The vehicle was scheduled to be parked in front of Stefanik’s Glens Falls office on Warren Street from noon to 2 p.m. A check of the area revealed the vehicle was parked there but was dark.

Zuccaro declined to reveal the specific cost of the campaign, only saying it was “in the five figures.”

The goal is to sway Republican members of Congress, according to a news release.

“So far, no Republican member of Congress has vocalized support for impeachment. The representatives targeted by these billboards include two people retiring from the House, lawmakers who have split with Trump in key votes and those who represent less conservative constituencies,” the release stated.

The release went on to say the billboards “demand that these members of Congress stop covering for Donald Trump’s abuses of power, in which he pressured a foreign government to interfere in a U.S. election to advance his own political interests, undermined state and local elections, interfered with national security, and got caught trying to cover it all up.”

The truck sign was supposed to be back before the newspaper and Stefanik’s office on Tuesday. It is scheduled to go to the Saratoga County Republican Committee office at 125 High Rock Ave. in Saratoga Springs on Tuesday and Wednesday from 2:30 to 4 p.m. and in Congress Park in Saratoga Springs from 4 to 5 p.m. on those days.

The sign will make a stop to Stefanik’s Plattsburgh District Office at 137 Margaret St. on Wednesday from noon to 5 p.m.