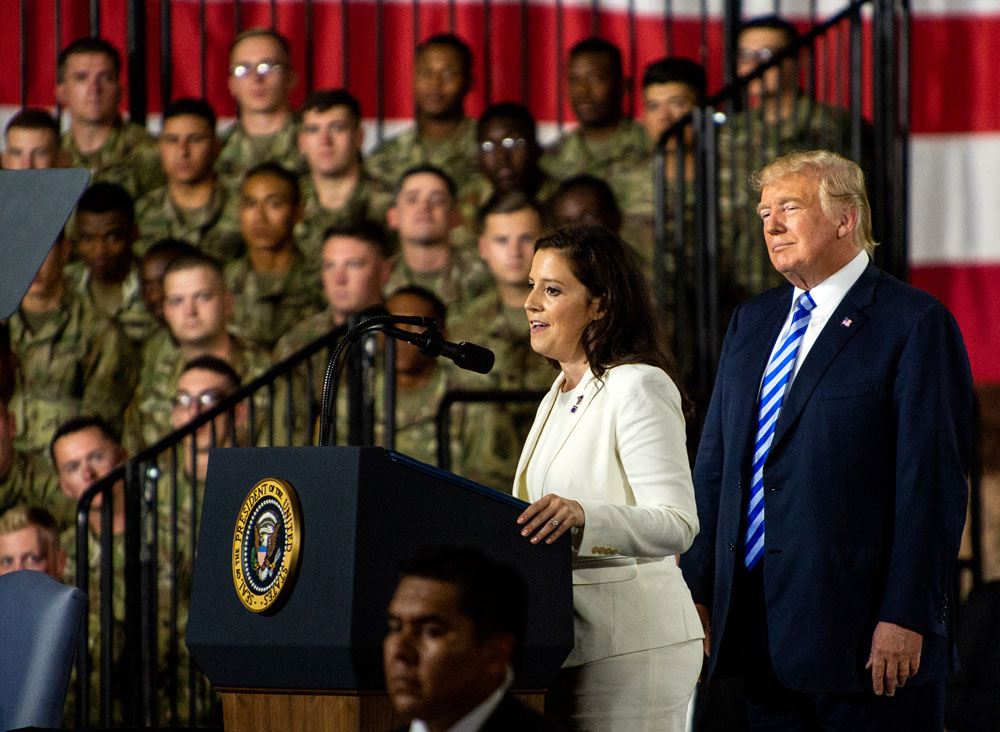 U.S. Rep. Elise Stefanik took a hard stance against President Donald Trump’s decision to withdraw U.S. troops from northern Syria on Monday, urging him in a joint statement to “understand the grave consequences of this rash decision.”

Trump bypassed the recommendations of Pentagon and State Department officials on Sunday, removing U.S. troops in Syria and leaving U.S.-backed Kurdish allies in the area vulnerable to a military invasion from Turkey in the north.

The exodus of U.S. troops from the area has led U.S. officials and politicians to express fears of a Turkish attack on Kurdish Syrians and a resurgence of the Islamic State, also known as ISIS.

Stefanik and four other members of Congress — who all returned from a delegation trip to that region on Monday — stated that abandoning the Kurdish allies who have fought side-by-side with the U.S. against ISIS is a dangerous mistake.

“The announcement regarding Syria is a misguided & catastrophic blow to our national security interests,” Stefanik wrote in a tweet. “Not only will this decision further destabilize the region, it will make it more difficult for the U.S. to recruit allies & partners to defeat terrorist groups like ISIS.”

This was the main idea behind the delegation’s statement as well. None of them named Trump in protesting his decision, instead naming the “Administration.”

The members who wrote the statement are all in one or more of the House Armed Services, Foreign Affairs and Intelligence Committees. Last week they visited Turkey, Afghanistan and the Syrian-Jordanian border to meet with foreign governmental leaders and U.S. security, intelligence and diplomatic leadership.

On the trip with Stefanik were U.S. Reps. Jason Crow, D-Colo., Abigail Spanberger, D-Va., Chrissy Houlahan, D-Pa., and Andy Kim, D-N.J. Stefanik was the only Republican listed on the joint statement.

The five Congress members spoke highly of the U.S.-backed Syrian Democratic Forces, a mostly Kurdish militia they said is the U.S.’s “primary partner on the ground in the fight against ISIS.”

“At the same time, Turkey views the SDF as a risk to their security priorities,” the members wrote.

Tedra Cobb, who is running against Stefanik for New York’s 21st Congressional District seat in the 2020 election, also released a statement.

“The decision to remove troops from the Syrian border is short-sighted and has received bipartisan condemnation for putting our national security at risk,” Cobb wrote. “The defeat of ISIS and stabilization of the region should be our goal. Breaking promises to the very allies who are fighting them will make it more difficult to put together coalitions and more likely we have to go it alone in the future.”

Turkish President Recep Tayyip Erdogan has threatened a military operation for months, as he sees the Kurdish forces as a terroristic threat to his country. Turkey has a documented history of human rights violations against the Kurds.

Trump spoke with Erdogan by phone Sunday before ordering troops to withdraw.

Turkey is also a NATO ally, so a Turkish invasion of a U.S. ally is complicated. According to its website, NATO decisions must be made with consensus of the 29 members countries, not unilaterally.

The traveling members of Congress said they heard “over and over again” from U.S. and foreign leaders who spoke of the danger posed to the U.S. and its allies if Turkish forces move into northern Syria.

“The bottom line is that these Kurdish soldiers are the first line of defense in maintaining the gains we have made against ISIS,” the members wrote.

The SDF protects northern Syria and is now guarding 11,000 captured “battle-hardened” ISIS fighters, according to the Congress members. A White House statement put the responsibility for those captured ISIS fighters in the hands of Turkey, which Stefanik and the other members said could lead to ISIS members escaping.

“If Turkey attacks these Kurdish soldiers, there is a grave risk that the ISIS fighters they guard will escape and return to the battlefield,” the members wrote.

The White House gave Turkey responsibility for the ISIS fighters and called on France, Germany and other European nations to “take (them) back,” saying these captives should not be a burden on U.S. taxpayers.

Trump did not speak well of the Kurdish fighters, as Stefanik did, and did not refer to them as allies.

“The Kurds fought with us, but were paid massive amounts of money and equipment to do so,” Trump tweeted. “They have been fighting Turkey for decades.”

Trump has praised Erdogan on several occasions before, and the Turkish President attended the opening of Trump Towers Istanbul in 2012. Trump did, however, give vague words of warning to Turkey.

“As I have stated strongly before, and just to reiterate, if Turkey does anything that I, in my great and unmatched wisdom, consider to be off limits, I will totally destroy and obliterate the Economy of Turkey (I’ve done before!). They must, with Europe and others, watch over….the captured ISIS fighters and families. The U.S. has done far more than anyone could have ever expected, including the capture of 100% of the ISIS Caliphate. It is time now for others in the region, some of great wealth, to protect their own territory. THE USA IS GREAT!”

Though ISIS has lost its territory (the Caliphate) it still has thousands of members mobilized. In August, the New York Times, citing an inspector general’s report to Congress, reported that there are as many as 18,000 remaining fighters in Iraq and Syria and could draw as much as $400 million.

Trump said he has “held off” Turkey’s invasion of Syria for three years but now wants to bring U.S. troops home and end the “endless wars.”

“I was elected on getting out of these ridiculous endless wars, where our great Military functions as a policing operation to the benefit of people who don’t even like the USA,” he tweeted. “We will be focused on the big picture, knowing we can always go back & BLAST!”

He later tweeted that the U.S. “will crush ISIS again if they come anywhere near us!”

There has been bipartisan resistance to Trump’s decision over Syria and Turkey.

Sen. Lindsey Graham, R-S.C., a onetime Trump opponent who later became one of his strong supporters, said he will introduce bipartisan sanctions against Turkey if it crosses the Syrian border and said he would call for its suspension from NATO. Graham also referred to the situation as “a disaster in the making.”