Trying to teach hikers before it’s too late 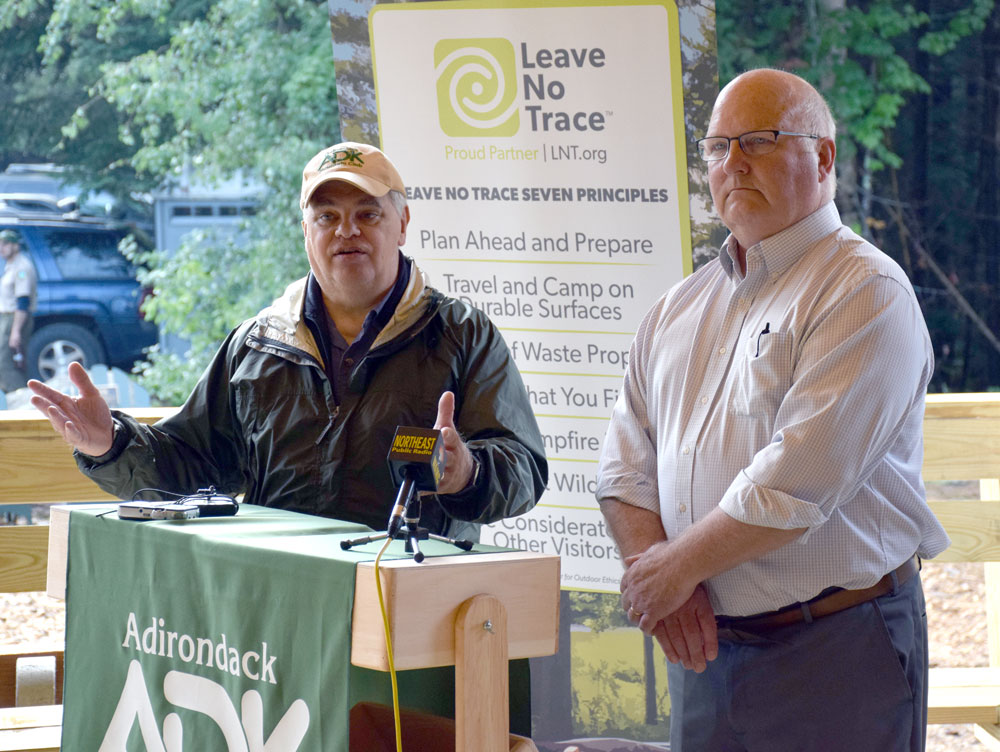 LAKE PLACID — The Leave No Trace Center for Outdoor Ethics has partnered with the state Department of Environmental Conservation and the Adirondack Mountain Club to make the High Peaks a “hot spot,” where public events can help educate outdoor recreationists.

In addition to some public service projects such as trail work, the organizations will also host public events over the next several days. Each day there will be a guided hike up Mount Jo and LNT education tables at the Mountain Club’s High Peaks Information Center.

Kicking off the events at the HPIC on Thursday morning, DEC Region 5 Director Bob Stegemann said the Adirondacks has plenty of places to go outside of the High Peaks.

“Part of the education is that we understand the High Peaks is a magnet,” Stegemann said. “But this is a big park, and there are a lot of assets that are very attractive. And we’re trying to spread the demand out as well to let people know about some of these other cool places to go and take some of the pressure off the High Peaks as a way to help deal with the natural resource issues.”

“And what’s really important as those numbers go up is that we try to educate people — plan ahead and prepare so that they’re less likely to need to be rescued,” Woodworth said.

“It’s very important to teach people to prepare for a hike. We’re up to almost a search-and-rescue per day in New York, and that’s putting a lot of pressure on our forest rangers and assistant forest rangers.”

Leave No Trace staff will also be on hand in the area. They said that while the Adirondacks are unique, everywhere that people recreate outdoors faces issues of overuse.

“People are recreating outside to be in these beautiful places and enjoy that place, whether it’s a city park or a wilderness area,” LNT’s Mitch Warnick said. “There are aspects (of the work) that are about interacting with other people and other visitors, but by and large it’s to protect the resource itself — whether that’s threatened species or preventing erosion.”

In addition to the daily events, there will be a social media workshop tonight at the Mountain Club’s Education Yurt Village at the Adirondak Loj; a program on reducing your impacts called ‘What would Bigfoot do?’ on Saturday; and Leave No Trace workshops on both Monday and Tuesday. For a full schedule, go to www.adk.org/participate-2019-hot-spot.

• Plan ahead and prepare.

• Travel and camp on durable surfaces.

• Leave what you find.

• Be considerate of other visitors.