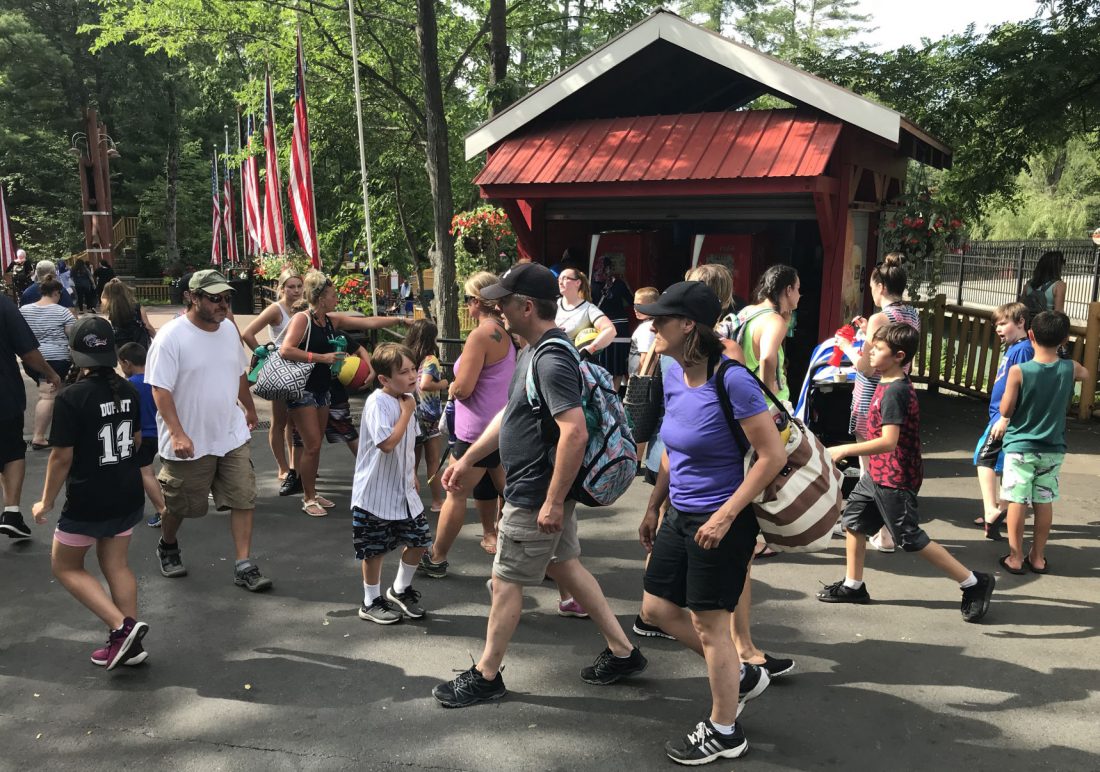 Thousands of people have parked at Great Escape on hot weekends this summer, but in the park lines have been short. The expanded water park seems to have soaked up much of the increased attendance, with many people floating the wave pool, lazy river and other amenities that can handle hundreds of guests at a time. (Provided photo — Kathleen Moore, The Post-Star)

QUEENSBURY — Great Escape’s expanded water park has drawn in record numbers of people this summer, forcing the company to park hundreds of cars in a series of meadows near its rides.

That means traffic to Great Escape may have finally reached levels that require it to install a traffic light at Round Pond Road, near Martha’s Dandee Cr√®me.

The company will begin counting cars as soon as Saturday. Every year, the company must submit to the town traffic counts for a typical Tuesday and Saturday morning in August at the intersection of Route 9 and the Northway Exit 20 interchange. If traffic is up about 500 cars at the peak morning hour, the company will have to pay for the Round Pond Road traffic light, among other changes. All cars are counted, not just cars going to Great Escape.

A decade ago, the company was 300 to 500 cars an hour below the threshold for the next phase of traffic mitigation. Since then, Great Escape has steadily added new rides — about one ride a year in recent years — but the amount of traffic hasn’t substantially changed.

The expanded water park seems to have pushed the company upwards at last. On hot weekends, Great Escape’s new Hurricane Harbor has been the place to be this summer.

“The weather was gorgeous and the new Hurricane Harbor was a big hit this weekend!” said Great Escape Marketing & Sales Director Jennifer Mance after the July 16 weekend. “I am unable to share with you attendance information specific to The Great Escape; however, I can tell you the weekend’s weather was very favorable and guests certainly took advantage of Hurricane Harbor as a perfect place to escape from the summer heat.”

Mance did not want to comment on whether that has changed this year.

But workers said that this summer, they have regularly filled the parking lot in the morning on weekends. On July 16, the parking lot filled in less than three hours. It can hold 4,000 cars, although some spaces are set aside for hotel guests, customers with the Diamond membership, and buses.

Once the main parking lot fills up, drivers go to the park and enter the handicapped parking lot. From there, workers direct them up small rocky hills to park on the grass in a series of meadows.

In 2004, Great Escape told the town Planning Board that if it could build a hotel and expand its parking lot from 2,000 to 4,000 spaces, it wouldn’t need to use that overflow parking anymore.

Using it regularly might indicate the company has hit the traffic threshold, but it could be that traffic is spread out over the course of the day. Only the busiest 60 minutes between 9:30 and 11:30 a.m., according to the written agreement with the town.

Supervisor John Strough thinks the threshold has finally been met. Great Escape officials are sure it hasn’t.

“We are continually reviewing our traffic patterns and parking capacity as it relates to our attendance agreement. We do not expect to meet the threshold in 2019,” Mance said.

When Great Escape gives the August traffic counts to the town, the Planning Board decides whether the threshold has been met.

Strough has been trying to broker a compromise, in which Great Escape would build a traffic light and crosswalk at Round Pond Road, as well as a “stub” road heading behind Martha’s. That stub could become a signalized entrance to Martha’s.

But the agreement between the town and Great Escape is clear: If the traffic threshold is met, the company must build the southern portion of its ring road, not just a stub.

The southern part of the ring road would connect to the existing road that leads to Great Escape’s parking lots. It would become a second entrance to the parking system, which means Great Escape would have to staff it to collect parking fees.

Strough is concerned, because the number of pedestrians crossing Route 9 amid heavy traffic by Round Pond Road has increased substantially in just two seasons. Many of the pedestrians are Great Escape employees, and many others are Great Escape customers leaving the park and trying to cross the road to buy ice cream at Martha’s.

There is no plan for a pedestrian bridge, but the proposed traffic light would turn red to allow walkers to cross when they press a button.