Pro baseball for Tupper, too?

Village officials in talks to host Empire League team in 2020

Surge third baseman Jordan Matos tags out Plattsburgh Thunderbirds runner Mohammed Hussein for the last out in the top of the eighth inning during Friday’s Empire Professional Baseball League game at the Petrova Avenue field in Saranac Lake. The Surge won the contest 5-1. Pictured at back is Surge shortstop Jose Negron. For more, see Sports A11-12. (Enterprise photo — Lou Reuter) 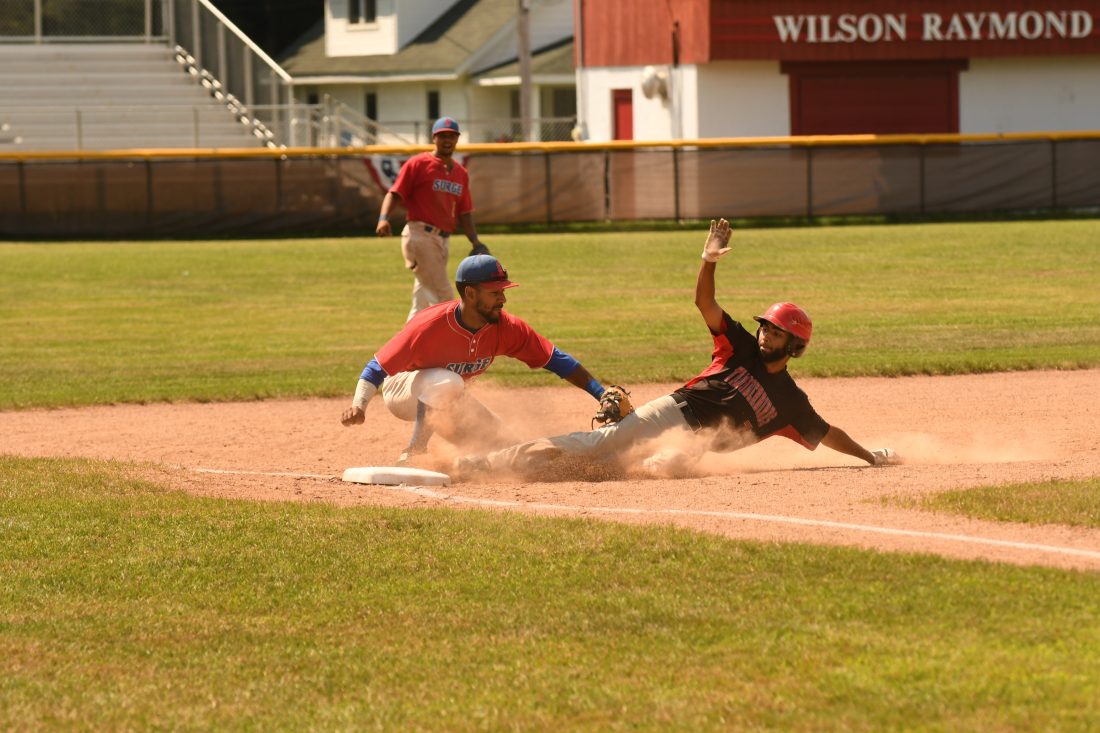 Surge third baseman Jordan Matos tags out Plattsburgh Thunderbirds runner Mohammed Hussein for the last out in the top of the eighth inning during Friday’s Empire Professional Baseball League game at the Petrova Avenue field in Saranac Lake. The Surge won the contest 5-1. Pictured at back is Surge shortstop Jose Negron. For more, see Sports A11-12. (Enterprise photo — Lou Reuter)

TUPPER LAKE — If all goes well, the Tupper Lake River Pigs will be playing baseball on the shore of Raquette Pond next summer. The village board and president of the Empire League met this week to discuss the village possibly hosting the baseball team next season.

The Surge, the league’s Saranac Lake team, has found success this summer, on the diamond and in the hearts of residents. Tupper Lake village Trustee David “Haji” Maroun has been attending these games with his son and said he kept asking Saranac Lake village Mayor Clyde Rabideau, “How do we get one of these teams?”

Rabideau brought the Surge to Saranac Lake after seeing a game in Plattsburgh and asking league President Eddie Gonzalez about the possibility of getting a team.

Rabideau helped get village leaders from Tupper Lake connected and Gonzalez met with them at the Hotel Saranac Wednesday to talk over the idea. On Thursday night, he visited the field at night at saw it under the lights. The field, now a softball field, was initially built for a Yankees affiliate team decades ago. 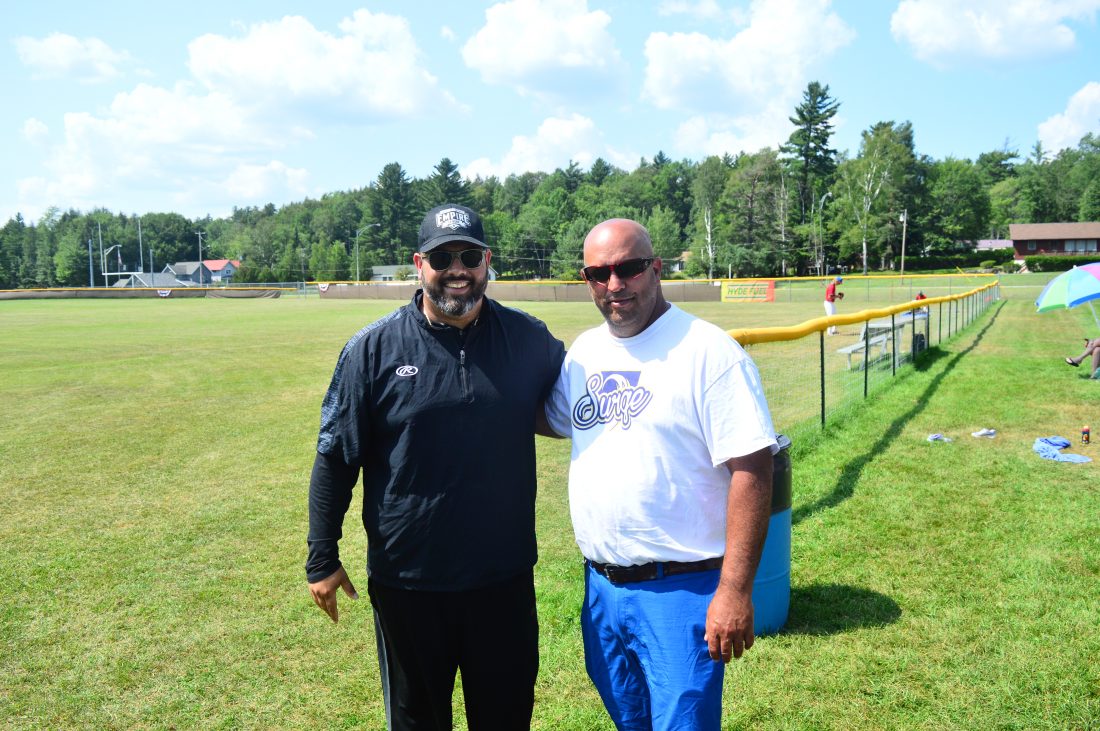 “Haji, for as long as I have known him, he’s pretty much a legend in this town for his softball pitching,” village Trustee Ron LaScala said.

“I’ve always been interested in putting a team on there. From when I was a kid, up,” Maroun said. “I couldn’t do it, but now that I’m a politician, I presented it to the whole board.”

Maroun said he is excited to host around 26 games on the field, have games under the lights and possibly spark a rivalry between Tupper Lake and Saranac Lake Empire League teams.

Gonzales said everything has been “talk” so far, but that he shares the village board members’ excitement.

“Nothing’s been set, finalized. But everyone’s on the same page as far as interest goes,” Gonzales said. “We’re highly interested … we want to make this happen. Everything is a go, as far as our end goes.” 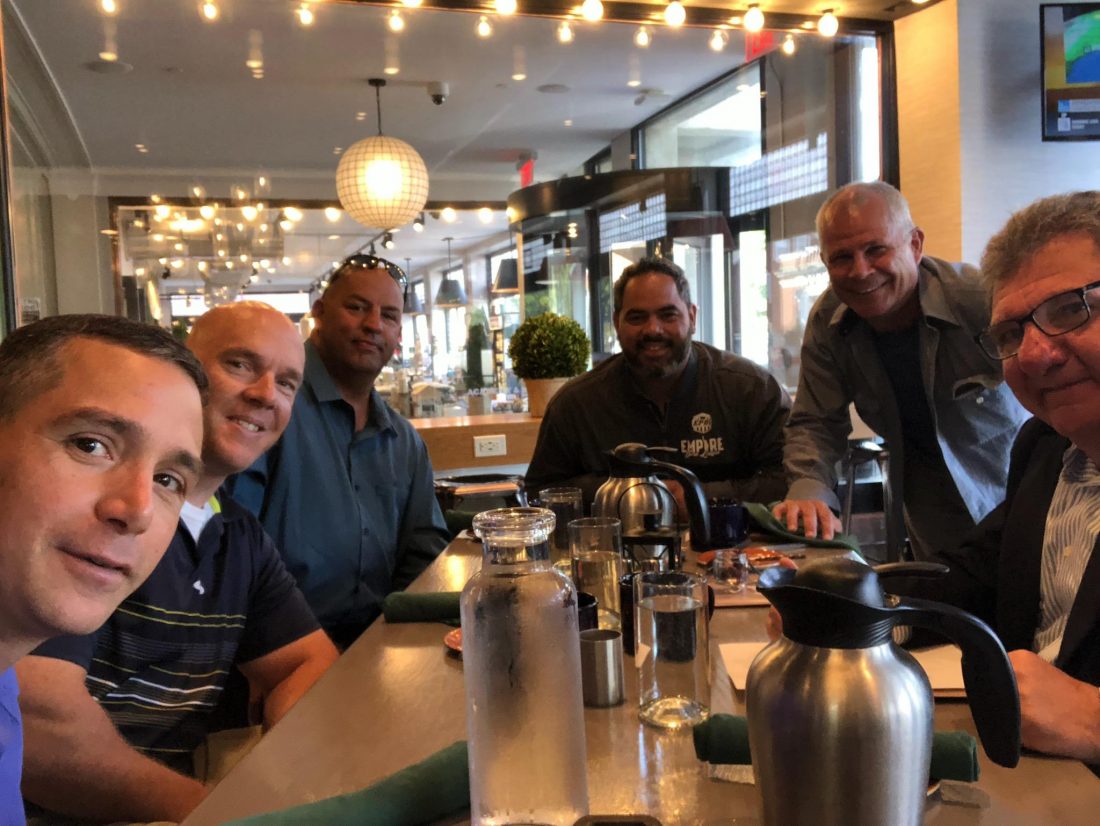 He said there are some upgrades to the field the village would need to make.

“If those things don’t happen, then there is no team,” Gonzalez said. “It hasn’t been a baseball field for many, many years.”

Maroun said a committee has been set up, made up of village officials and local residents to find solutions to all the logistical problems.

He said the field will have to be fixed up. The left field, which floods every year, will have to be graded, the infield sodded, the fences replaced, the outfield fence lines rearranged, bullpens installed, the first-base-line bleachers removed and replaced with a “party deck,” and the old dugouts excavated and rebuilt. The former dugouts, which were dug into the ground, were filled with sand and covered in wood years ago.

They will also need to figure out housing and food for the team.

“If it wasn’t for Haji really pushing this, it wouldn’t be happening,” LaScala said.

Much of the field work would need to happen before winter for the team to work out.

What is a river pig?

The field is on the shore of Raquette Pond, where, back in the early 1900s, logs were processed in the mills lining the water’s edge. These logs were floated down the Raquette River from all over until they came to rest on the shore.

To keep the logs moving on their trip downstream, loggers would clear up jams using long poles, all while balancing on the logs they were directing. These were the river pigs. Their job was dirty, cold and dangerous, and required a lot of skill and agility.

Maroun said Gonzalez pitched the name and that he must have done his research.

Both said they will know for sure if the River Pigs will play next year in Tupper Lake early next week. Maroun said the committee’s first meeting is on Wednesday.

Gonzalez said it has been an amazing experience for him expanding the Empire League into the Tri-Lakes area and that he enjoys bringing cheap entertainment and quality baseball to locals and their families.