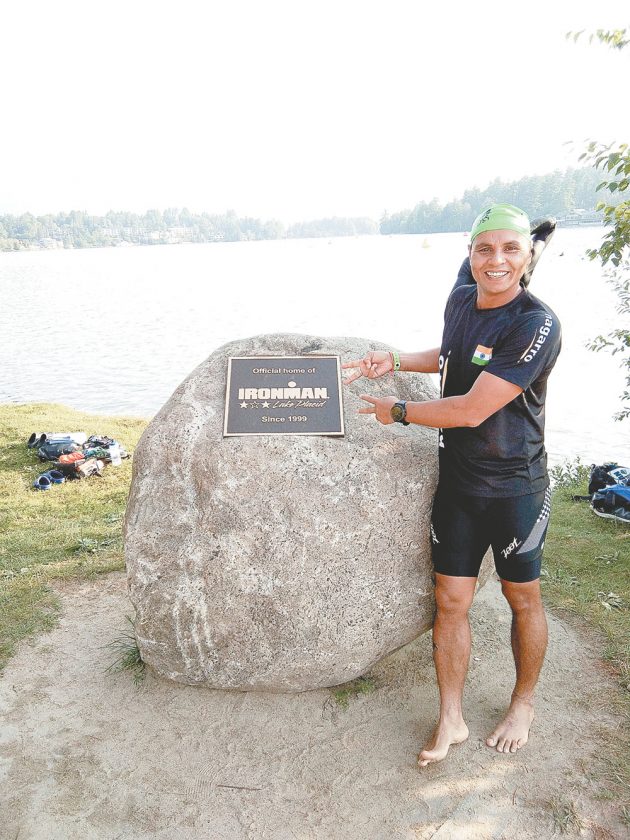 LAKE PLACID — When Praveen Kumar Teotia’s team threw a tear gas grenade into a darkened room in the Taj Mahal Palace and Tower Hotel where he lay, injured by gunfire, he thought his life was over.

Before he was an Ironman athlete, Teotia, 34, was a member of the Indian Navy’s Marine Commando Force. He was dispatched amid chaos as 10 members of the Islamist terrorist organization Lashkar-e-Taiba, or “Army of the Pure,” stormed six buildings in Mumbai in 2008. The attack lasted three days. In all, 164 people were killed, and thousands more were injured.

Teotia and his team were credited with helping free citizens held in other areas of the hotel. It’s a feat not without sacrifice. Teotia was shot multiple times by an AK-47, suffering injuries to his lungs, his ribs and his left ear.

For years after the attack, doctors told him that he’d never run or swim again, and they warned him against any physical activity.

Yet on Sunday, Teotia was among nearly 2,400 people competing in the Ironman Lake Placid triathlon.

Teotia was 17 years old when he joined the military. He was raised in the small village of Bhatona in Uttar Pradesh, India.

“It’s a tradition of our village to go in defense of the country,” he said.

Teotia didn’t meet the height requirements for the Army, so he joined the Navy, and later MARCOS, formerly known as the Marine Commando Force — similar to the United States Navy SEALs.

He was on duty the night of Nov. 26, 2008. He learned of the terrorist attacks on television, where reports were just beginning to surface of shootings and bombings at different locations throughout the city, including the Taj Mahal Palace and Tower Hotel.

His commanding officer told him, “You go to the armory, get ready, get a weapon. You’re going in the second team,” Teotia said.

When he arrived, four terrorists had entered the hotel and a massive fire had spread throughout the building. An Indian television station, NDTV, estimated that anywhere from 100 to 150 hostages had been taken by the terrorists.

Teotia was named the point-person on his team, leading the way as they entered the Taj hotel. His team entered into the building and began clearing rooms. They didn’t encounter any problems until the team, joined by another four commandos, reached a chamber hall on the second floor of the building.

That’s when the bullets started flying.

Teotia was first in the door, and the first one hit.

“Approximately 10 steps (in), I hear two AK-47s,” he said. “I confirmed there were two terrorists inside the room. I took position and aimed toward where I heard the sound.”

“I saw a flash,” he said. “Automatically, everything was muscle memory … I shot three times.”

He doesn’t remember what happened next. He lost consciousness. When he resurfaced, he was on the floor. He felt severe burning. The pain was overwhelming, but he was alive.

“I held the carpet tightly and tried to control the pain. If I made a sound, they would know I was injured. I found myself alone in the room. My team went back,” he said.

Teotia took his weapon and started firing back at the terrorists and tried to take cover. Eventually, he threw a grenade. He counted to 10 but it didn’t go off. His team, unaware if he was still alive, threw a tear gas grenade into the room. It landed by his feet.

He saw two choices: Continue to fire on the terrorists and die. Or sit still and die.

He stood and fired from the hip, sweeping the room and running toward the door.

When he reached the door, he thought he was dead.

“It was like someone pushed something out of my chest. I was unable to breathe,” he said.

His team took hold of him and pulled him out of the room. He was evacuated. It wasn’t until he saw the flash of cameras outside the hotel that he realized: “I’m still alive. I’m still alive.”

Teotia’s right lung was damaged by a bullet. He suffered hearing loss on his left side and injuries to his ribs and hand.

Doctors stitched up his lung, but they predicted that he may only live for another three to four days.

“I struggled with my life. One side was death, another life. I fought with that a lot,” he said.

“The doctor advised me: ‘Don’t swim. Don’t run. Don’t dive. Don’t do any physical activity. We’ve already operated on you once. You can’t survive again.'”

He felt he was just a survivor now, unable to do anything for the rest of his life.

What followed were years of darkness. Though he was awarded the Shaurya Chakra, an Indian military honor for valor, courage or self-sacrifice, he was injured. Unable to do the exercises he used to do with his fellow commandos, he felt alienated. He isolated himself.

“I lost my confidence,” he said. “I couldn’t sleep at night.”

He asked himself: “Is it you, Praveen? Where are you now?”

“I lost everything,” he said.

He made a choice to flout his doctor’s orders. One night, he dove into the water where he used to exercise.

In 2012, he started swimming longer distances. He went back for an exam and his doctor gave him the same advice: no physical activity. He started gaining weight and feeling bad about himself. His former teammates no longer wanted him to play soccer with them.

He did yoga. He started running again. There was pain in his lungs, but he reduced his speed, ran short distances. He focused on his diet.

“I left all of my excuses behind me, and I started working on my efforts.”

Teotia said after trauma, excuses and things you feel you can’t do build up like bricks in a wall before you.

“When you say ‘cannot,’ it starts making a wall,” he said. “And once (that wall) reaches your height, it becomes a phobia.

“That phobia, and that wall — I just kicked that wall and used those bricks to build a bridge to ‘can.'”

His old life in the MARCOS never returned. He applied for a vacancy in his unit when it became available, but he was rejected because of his medical status. His doctor wouldn’t sign off. He was regulated to a desk job.

He underwent surgery to reconstruct his ear. Later, he decided to apply to run in the Mumbai Marathon. He wasn’t allowed to compete because his doctor wouldn’t sign off on his condition. He asked one of the people involved in race registration if there were any way he could compete, and they agreed to let him know if someone dropped out. Someone did, and he competed under a different name.

More and more, Teotia started competing in half and full marathons. In 2017, he competed in the Khardung La Challenge, a 72-kilometer marathon in Jammu and Kashmir through a mountain pass, where most of the course is above 14,000 feet in elevation.

Last year, he competed in the Ironman African Championship at Nelson Mandela Bay in Port Elizabeth, South Africa. He finished at 14:19:38, according to race results.

“Prove yourself, and you can run anywhere,” he said.

“Anybody can do this.”

He set his sights on the Lake Placid Ironman because to him, the United States represents unlimited opportunities. But he also wanted to come to compete for disabled veterans like him. On Saturday evening, Teotia was excited. He was looking forward to competing in the country where Ironman was born.

He arrived for his first visit to the United States in time for his 34th birthday on July 17. That was the same day Pakistani authorities arrested Hafiz Saeed — the man who’s alleged to have been behind the terrorist attacks in Mumbai, according to Reuters. Teotia saw that as an unexpected gift.

Teotia hopes to impart that disabilities shouldn’t stop anyone from doing what they want to do, that change is a part of life and strength can come from knowing yourself.

“Being down is nothing. You have to stand again,” he said.

“It’s like a heartbeat. It goes up, it goes down and again it goes up and down. If it’s a straight line, you’re no more. Human life is the same. If nothing is happening in your life, you’re a subject and nothing else. You’re just following the routine.

Teotia said you have to leave your comfort zone and push your every limit.

“Then you can find yourself,” he said. “If you want to survive, you have to be strong-willed. Get to know yourself, and you’re strong.”

Regardless of his finish time, Teotia is already planning for his next event. He has registered to compete in the New York City Marathon this November.

“Every finishing line gives you one more start line,” he said.

(Full Ironman Lake Placid results are located inside the newspaper.)