The state now bans roadside parking from the Rooster Comb trailhead in Keene Valley, seen here, to Chapel Pond. It’s still OK to park in designated parking areas like the one seen in the background at right. (Enterprise photo — Justin A. Levine) 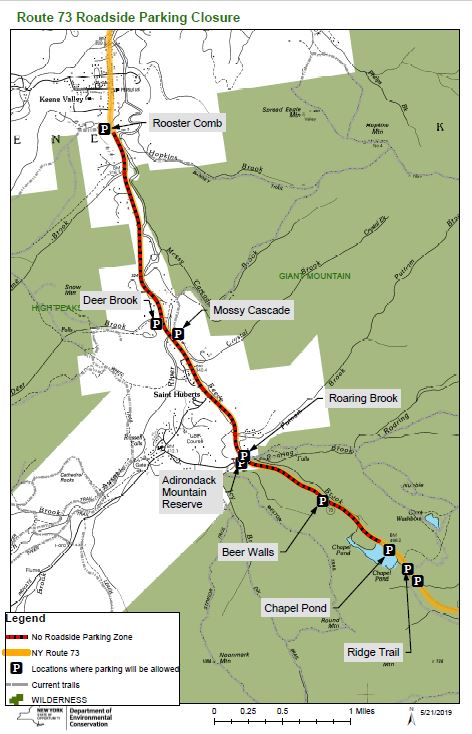 KEENE — The state has started installing “no parking” signs along Route 73 in the town of Keene, where multiple popular trailheads are located.

The Department of Environmental Conservation announced Tuesday — after the Department of Transportation had already begun posting “no parking” signs along the road — that drivers would no longer be allowed to park along a 4-mile stretch of Route 73 between the Rooster Comb trailhead in the hamlet of Keene Valley and the Chapel Pond trailheads to the southeast, toward I-87.

Parking will still be allowed in designated pull-off areas along the road, but parking on the shoulder will now be prohibited “for public safety reasons, primarily because pedestrians, mainly hikers and bicyclists, were forced to walk or ride in vehicle lanes when parked vehicles occupied the shoulder of the road,” the department said in a news release.

Installation of the new “no parking” signs is expected to be done by June 14.

According to the DEC, its forest rangers and environmental conservation officers, along with State Police and Essex County Sheriff’s Office deputies, will increase patrols in the area to enforce the parking restriction. 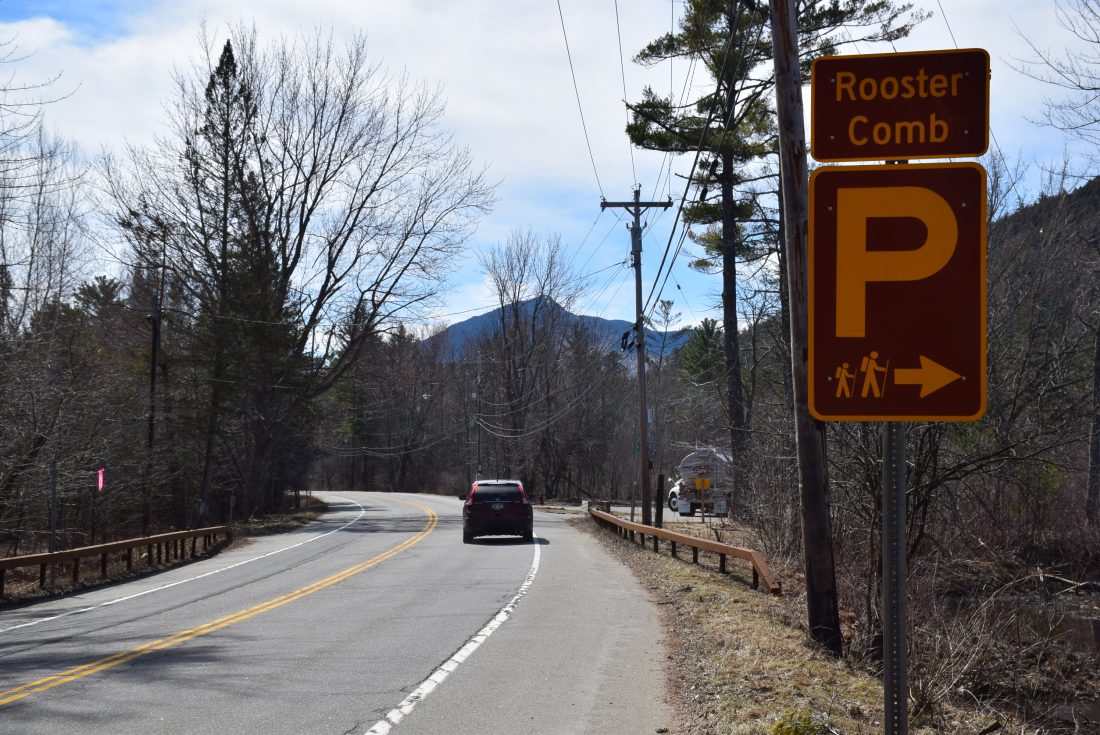 The state now bans roadside parking from the Rooster Comb trailhead in Keene Valley, seen here, to Chapel Pond. It’s still OK to park in designated parking areas like the one seen in the background at right. (Enterprise photo — Justin A. Levine)

This isn’t the first time the state has closed parking in that area. Last year, it began prohibiting parking in the vicinity of Roaring Brook Falls, although that didn’t stop people from doing so. The town of Keene has also banned roadside parking along AuSable and St. Huberts roads, Market and Adirondack streets, and Mason Young Lane.

It’s unclear how visitors to the High Peaks and Giant Mountain wilderness areas will be transported to trailheads when designated parking areas are full.

Essex County Department of Public Works Deputy Superintendent Jim Dougan told the county Board of Supervisors at its Ways and Means Committee meeting Tuesday that the DEC has approached him about the possibility of using county public transport to shuttle hikers from point A to point B. But no formal agreement has been reached, according to Dougan.

Trails within the High Peaks continue to be popular. Some advocacy groups, including the Adirondack Council, have argued that most of the parking areas along Route 73 are already beyond capacity during peak demand times.

A study released by the Adirondack Council last year showed that at peak weekend demand times in 2017, parking areas in Keene — including the Rooster Comb trailhead, the Adirondack Mountain Reserve trailhead, the Garden trailhead and Marcy Field — saw 721 cars parked there, though the capacity was only 353.

Beyond the availability of transportation between parking areas and trailheads, supervisors want to know who’s going to foot the bill for accommodating hikers.

“Maybe the DEC will build us a parking garage in Lake Placid and pay to transport these people,” county board Chairman Shaun Gillilland said, prompting multiple supervisors to laugh.

Keene super: ‘too much for DEC to handle’

For the last 15 years, the town of Keene has shouldered the cost of running a shuttle from Marcy Field to the Garden trailhead. But as of late, the shuttle runs only on weekends, and the road to the Garden is closed due to a bridge replacement.

Keene town Supervisor Joe Pete Wilson wants the state to contribute funding for transportation and trailhead amenities to offset the cost of providing those services.

Wilson said creating a management system that works will require some collaboration — something that he hasn’t seen as of late.

Out on the trails, “it’s just been the wild west,” he said.

All the while, Keene officials have been “left out in the cold” when it comes to discussions about the future of trailhead parking management, he said.

“(This problem is) more than the DEC can handle. Keene needs to play an active part,” Wilson said.

The DEC did not immediately answer questions about when transportation may be available and whether the state would pay for that transportation.

(Correction: An earlier version of this article incorrectly said the DEC posted the “no parking” signs. The DOT did that.)