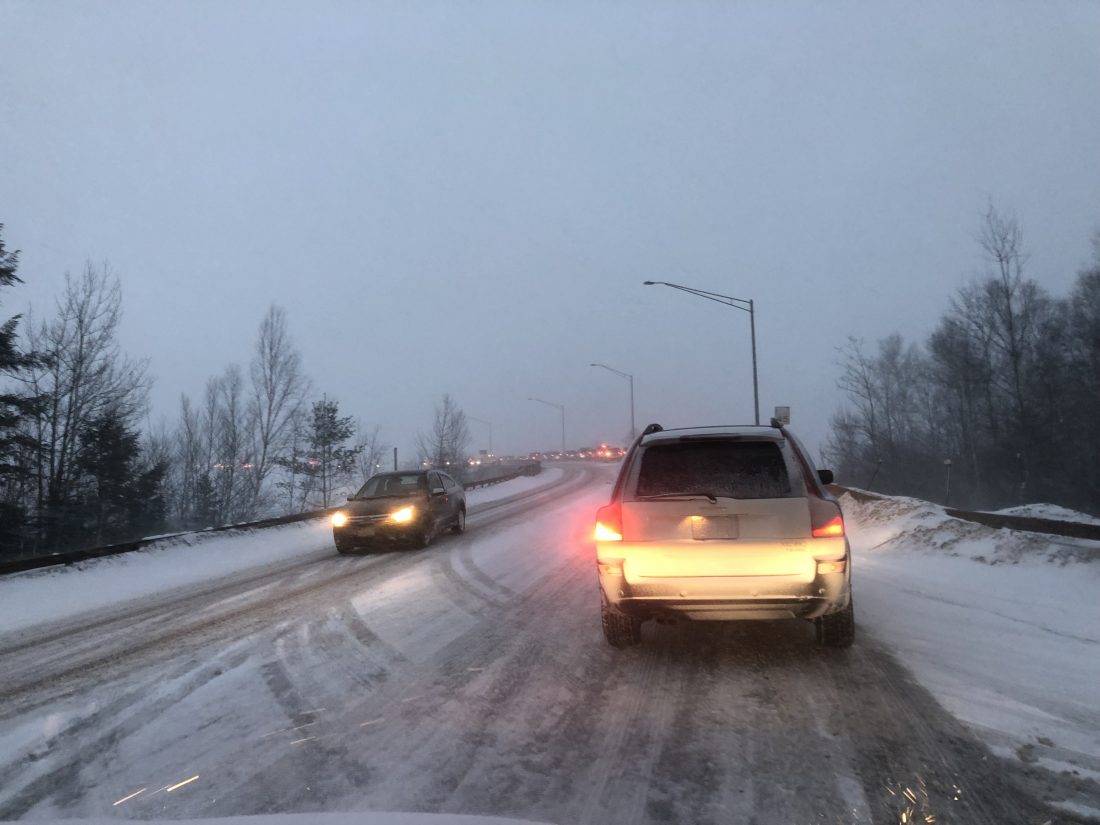 Whiteout conditions brought traffic to a stand still Friday afternoon on state Route 30, the Moody Flow, in Tupper Lake as a vehicle crash brough traffic down to one lane. (Enterprise photo — Brittany Proulx)

(Editor’s note: There was some confusion over whether or not this crash was a tractor trailer jackknifed, as first reported. We learned around 9 p.m. that the tractor trailer did, indeed, jackknife, but was then hit by the Subaru Outback amid whiteout conditions.)

TUPPER LAKE — A tractor trailer jackknifed on the Moody Flow causeway later Friday afternoon amid whiteout conditions and was then hit by a Subaru Outback. The crashes briefly closed state Route 30, bringing traffic to a standstill.

Picerno said both lanes of traffic were shut down for a little while. He said two people were transported by the Tupper Lake Volunteer Ambulance & Rescue Squad to Adirondack Medical Center in Saranac Lake, but he had no information on their conditions.

As of 4:45 p.m., traffic was completely halted and emergency vehicles were present. By around 5 p.m., one lane of traffic was open and a tow truck was on the scene. By 5:35 p.m., the scene was cleared, but traffic was still slow moving as the snow and wind severely hindered visibility on the causeway.

The National Weather Service had issued a wind advisory for Friday afternoon.

“Gusty westerly winds up to 50 mph are expected to continue across portions of northern New York and Vermont today and persist through Saturday morning,” according to the warning.

Friday began with temperatures in the 40s but saw them sink into the 20s over the course of the day, coupled with thick snow in the afternoon.

Temperatures are predicted to drop to the single digits overnight and rise no higher than the teens through Saturday, breaking into the 20s Sunday for a few hours. There is limited precipitation predicted through the weekend.