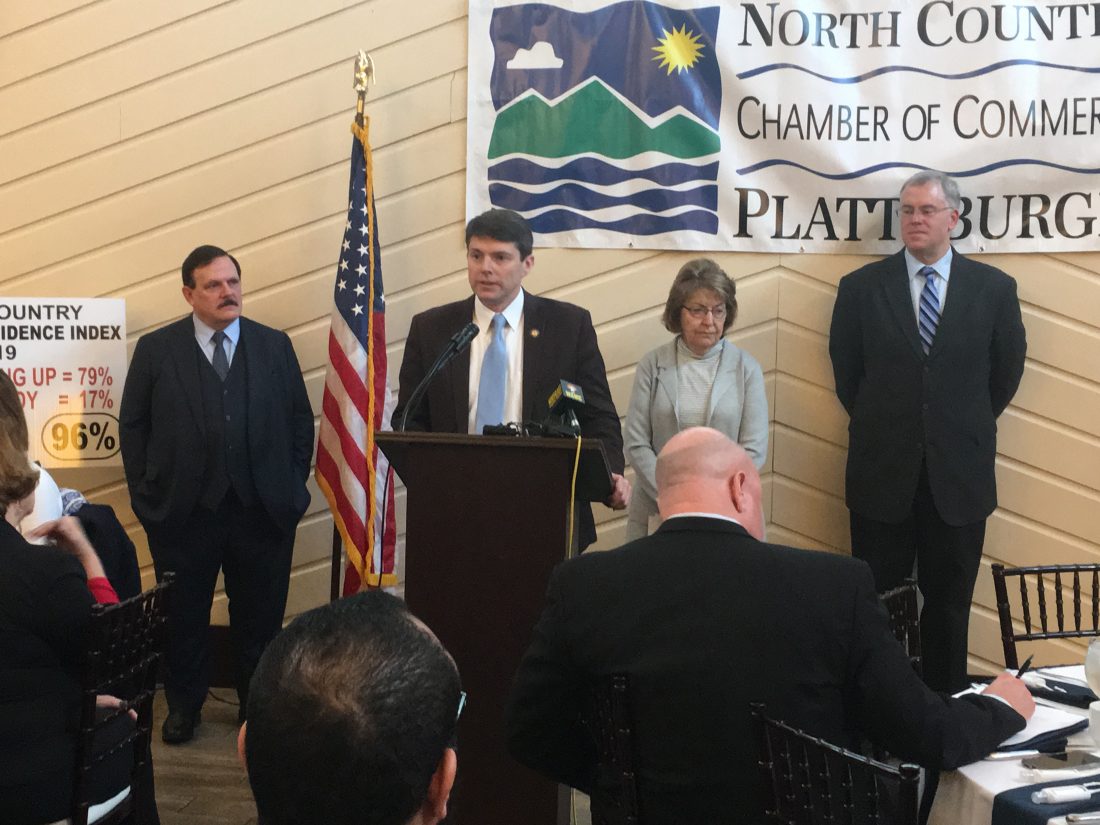 PLATTSBURGH — The North Country representatives in state government say there is still a need for more cellular telephone service in the region, and there are still many questions to be answered about legalizing recreational marijuana.

“The last few years, when you look at some of the legislation that has been proposed and voted on, some would say that marijuana has already been legal in Albany,” quipped Assemblyman Daniel Stec at Friday’s North Country Chamber of Commerce Legislative Affairs Breakfast.

Stec (R-Queensbury), Assemblyman Billy Jones (D-Chateaugay) and Sen. Betty Little (R-Queensbury) talked about state issues and fielded questions at the annual event that attracted a sold-out crowd of 180 at the Butcher Block restaurant.

Little said she still has yet to decide how she would vote on legalizing recreational marijuana.

She is concerned about how people would be tested for it in situations where they are suspected of driving under the influence, how employers would deal with workers possibly showing up stoned, and how it would affect law enforcement.

“We need a policy that is clear, consistent and up to date,” Little said.

Advocates for legal pot in the state point to neighboring states Vermont and Massachusetts that have legalized recreational use, as well as Canada.

Little said that may not be the best argument for supporting legal marijuana.

“I used to tell my kids that just because everyone else is doing it doesn’t mean you should,” she said. “We need to do this carefully.”

Jones said he faces many questions on the issue. He is concerned about testing methods and how federal legislation would mesh with state laws.

“We need some clear answers before I’m willing to vote for it,” he said.

One idea being considered is letting each county decide for itself if it wants pot legalized.

“That’s why I say, let’s put the brakes on a little bit here and figure out all these issues first,” he said.

Stec said he is not in favor of legalizing recreational marijuana.

“I will continue to oppose this legislation,” he said.

All agreed that the need for better cell service in the region continues to be an issue; that was also a topic of discussion at last year’s breakfast.

Little said restrictions within the Adirondack Park that prohibit the height of cell towers to protect vistas are not all reasonable.

Little said adequate cell coverage is now vital not only for commerce but for health and safety. She also believes that people do not mind looking at cell towers.

“It has become a necessity, and if we want people to come to the area, we need to provide better coverage,” she said.

“There is nothing wrong with cell towers. Even if they are ugly, they work.”

Stec, an avid Adirondack hiker, said cell towers, like the old fire towers on many mountaintops, should not be a problem.

“A fire tower or a cell tower has never ruined my day on the trail,” he said.

Stec also supports adding more forest rangers to the state roster to serve the growing number of visitors to the area.

“If we are going to invite people for Sunday dinner, then we need to buy more groceries,” he said.

Jones said cell coverage is at the top of the list of concerns among those who visit his office.

He said more funding for better coverage is needed, and he hopes it can be addressed in this year’s budget process.

“It (cell service) affects just about every aspect of our lives, and there are still places that are not covered,” he said.

The trio of legislators also said they would push for more funding for workforce development, as many local businesses stress the need for better-trained workers and more of them.

“Small businesses are the backbone of our communities,” Little said. “We want people to move here, but we need more jobs, and we need more vocational training, too.”

In Gov. Andrew Cuomo’s budget proposal, there are cuts to Aid and Incentives for Municipalities and Consolidated Highway Improvement funds, which include Winter Recovery funds for harsh winters.

“All you need to do is look outside to see that we not only need to restore the Winter Recovery funds, but maybe increase it,” Jones said.

Stec said he hopes the funding cuts for municipalities can be restored and that the governor will relent once negotiations get deeper.

“A lot of this is just the gamesmanship of governing,” he said.