School cops could be coming to Tupper Lake 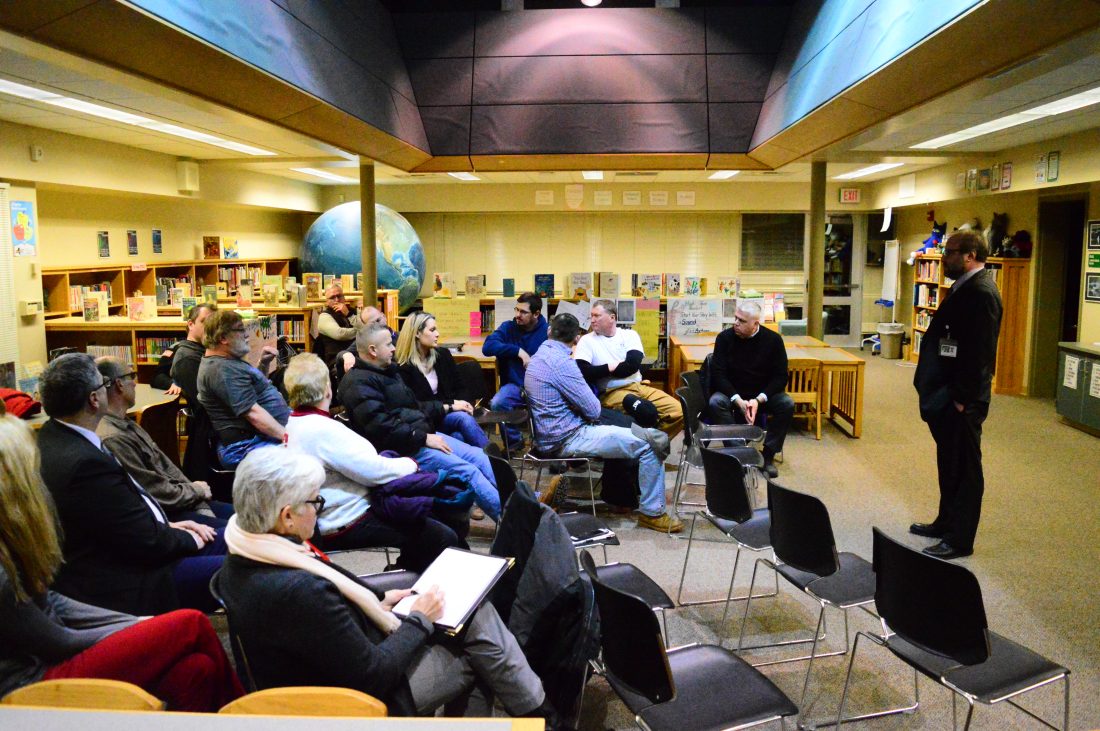 With a national eye on school safety, especially regarding gun violence, many districts have taken to hiring their own security to be ready for emergency incidents. The U.S. Naval Postgraduate School found that 55 people were killed in acts of school gun violence in 2018.

All that spoke in attendance at the L.P. Quinn Elementary School’s Michelle LaMere Library were in support of hiring the officers and having them be armed.

“It’s almost not a question of ‘Do we need it or not,’ it’s just how do we make it happen?” village board Trustee Clint Hollingsworth said.

The district is not committing to a plan yet, but administrators are hashing out the details of their ideal system and soliciting the public to give their opinions and ideas.

There will be another SRO meeting at the middle-high school Feb. 27 at 6 p.m.

District Superintendent Seth McGowan said there is a range of the responsibilities the people they hire can have, anything from school safety personnel, someone to work with students and staff in an educational role, to an armed guard, who has minimal interaction with students.

Somewhere in the middle, he said, is a school resource officer, who is there for protection over the building and works as a member of the school staff. This officer would patrol the building, work with administration to tighten and improve safety planning and build rapport with the students and faculty.

In what the district, village police and some government officials believe is the most efficient route, the district would contract two officers from the village police, “renting” them for school hours and possibly extracurricular activities.

There is already a daily state and local police presence at the buildings. This program would make sure that presence is constant.

In the past, the department been short staffed, but in the past few weeks hired two new officers. Police Chief Eric Proulx said, in this case, he would like to hire two more officers and designate two current ones to be contracted out to the school.

He said the school resource officers would have to be trained in juvenile law, especially since the Raise the Age legislation — passed in 2018 — changed the age of criminal responsibility from 16 to 18 years of age.

Officers from the village department who would cover for SROs taking sick or vacation leave would not have to be specially trained to work in the school, and retired police Chief Tom Fee — who occasionally assists the force — said retired officers have the same law enforcement abilities as currently employed officers when they are granted by the department.

The SROs would have all the full jurisdiction of any police officer, and could intervene in school disputes and inter-student altercations. McGowan clarified that they would be there as law enforcement, not for discipline, adding that he wants students to be more afraid to be told, “go see the superintendent” than the SRO.

McGowan said the district is asking the town and village to help pay for a portion of the contract, but that the district will pay the lion’s share of the contract. The officers are currently in the district’s budget and McGowan does not believe it will put them over the 2 percent tax cap.

In the fall, several law enforcement agencies held a tactical drill at the high school, simulating an active shooter situation.

“I thought that we had a pretty good safety plan. I learned that … we had a lot of holes in our plan,” McGowan said. “It really forced me to say, ‘What is it that we’re missing here?’ In the end, my feeling is that we’re missing somebody. Had we had somebody in our building, on site … that drill would have resulted in far fewer people being ‘killed.'”

McGowan said the district has already taken several measures to improve safety, including installing an “all call” lock down button on every phone in the district. He initially disliked this addition — believing it would be more likely to be used by students trying to play a prank than in an emergency situation — but said while that may be true, he has reversed his feelings about it and believes if it could help in an emergency it is worth it.

McGowan said several times that, as a superintendent, school safety takes priority over education of any sort. This idea was echoed by members of the public who said they do not care if the addition of SROs raises their taxes slightly, and that they can afford to keep their kids safe.

“I heard a saying years ago: ‘Don’t tell me what you value. Show me your budget and I’ll tell you what you value,'” McGowan said.

As in all other discussions about SROs, McGowan commented on how sad he feels that this conversation has to happen. He said he remembers back when he started as principal at L.P. Quinn in the early 2000s, ID cards for faculty were a controversial idea that he pushed for. Now, he has to give the disclaimer that an officer will not stop a school shooting and can only mitigate casualties.

McGowan recalled talking with the superintendent from the Sandy Hook school district, where 26 elementary school children and teachers were shot and killed in 2012.

“‘The person who is going to come in and enact violence in your school, you have already met,'” McGowan quoted the superintendent. “‘You’ve probably shook their hand.’ That sent chills down my spine.”

L.P. Quinn Principal Michele Pinard mentioned that most school shooting incidents can be traced back to mental health, and that the district has given that issue more attention in recent years, with school funding and new employees. She said the SROs would be another addition to those resources, giving students and faculty a confidant, someone to tell when they know something.

Proulx addressed the fear that having an armed SRO means bringing a gun on school grounds, saying that guns are already there. He said when he goes to the school in the mornings during hunting season, he sometimes sees firearms in trucks, and checks to make sure the doors are locked.

“They’re here. They’re at the school,” Proulx said. “Nobody thinks twice about dropping the kid off and going to the woods.”