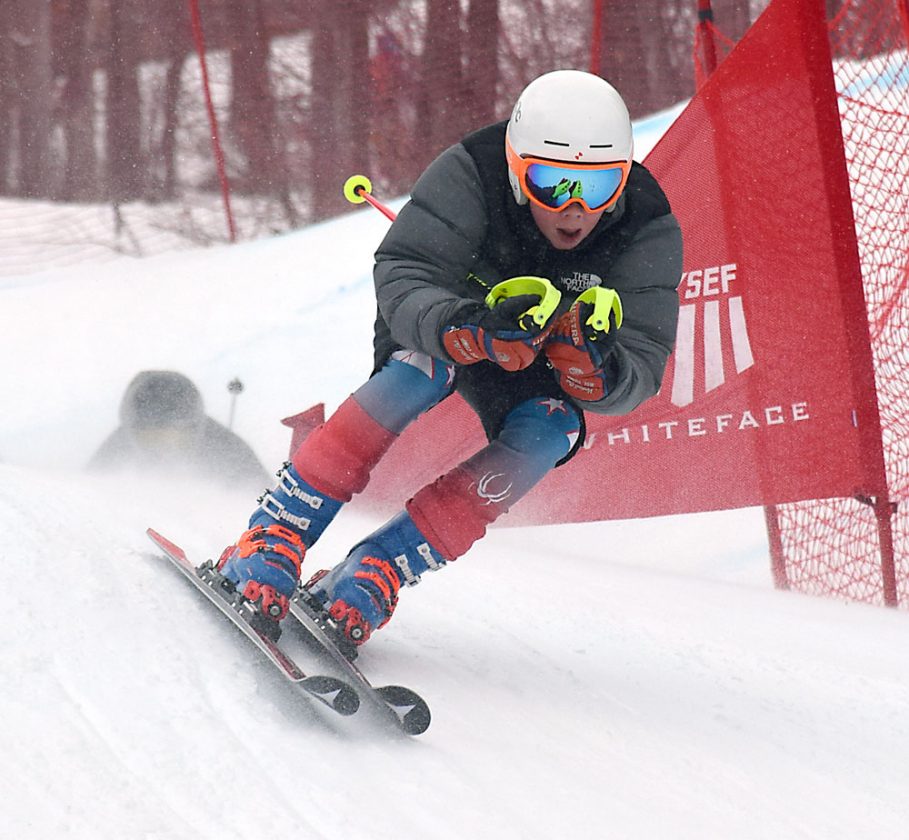 An American skicross racer is intent on the next curve at the state-owned Whiteface Mountain Ski Center in Wilmington on Jan. 10 during the International Children’s Winter Games, for which about 450 athletes age 12 to 15 came from 14 countries to Lake Placid. (Enterprise photo — Justin A. Levine)

LAKE PLACID — State-owned Olympic winter sports venues and ski resorts could see major investments for the third year in a row if the state Legislature approves the governor’s $82.5 million proposal.

In Gov. Andrew Cuomo’s 2018-19 budget, he proposed investing $80 million in upgrades to these facilities through the state Olympic Regional Development Authority, including $10 million for maintenance and energy efficiency, plus $2.5 million from the Office of Parks, Recreation and Historic Preservation budget as part of the New York Works initiative.

Also, ORDA’s operations budget would add $18 million for unspecified contractual services and cut $1 million for supplies from this year’s amounts. The authority’s staffing budget would not change.

“Additional investments in these North Country assets will continue to make New York competitive for winter recreation and travel, attracting large sports events and ultimately driving year round business and economic sustainability for the area,” Cuomo’s State of the State book says.

It isn’t clear yet on what specifically this money will be spent, but to put this number in perspective, every year the state Regional Economic Development Council awards grants to different areas across New York such as the North Country, the Southern Tier and the Mohawk Valley. Top performers can earn more than $80 million. Roughly the same amount of money was just proposed to ORDA.

In 2018 the governor and Legislature approved a $60 million capital investment in ORDA venues, plus $2.5 million from the Parks department. In 2017 they approved $20 million in ORDA capital.

Over the past two years, ORDA has completed a few projects and has also been in the design phase of multiple upgrades and additions for Olympic venues.

Lake Placid’s ski jumping complex is expected to be renovated to meet modern international jumping standards. Plus, the venue is supposed to add a zipline and snow tubing hill for the casual visitor.

The Olympic Sports Complex and Cross Country and Biathlon Center at nearby Mount Van Hoevenberg is expected to build a new biathlon stadium, an alpine coaster for public recreation, a second coaster for transport, more cross-country ski trails, a welcome center, an 8 million gallon snowmaking reservoir and storage structure, and hiking trailheads that would connect Mount Van Hoevenberg to Cascade, Porter, Marcy and Pitchoff mountains. Most of these aspects would also be provided with updated lighting systems.

Jim McKenna, CEO of the Regional Office of Sustainable Tourism in Lake Placid, said he didn’t have the information to comment on specific future ORDA projects, but like Cuomo, he said the investments ensure ORDA facilities can compete as sport and year-round casual attractions.

“A lot of our young athletes from the area and the Northeast train in Utah,” he said. “That shouldn’t be the case. We’re predominantly focused on sliding and downhill skiing here, but wouldn’t it be great to have the full calendar of events?”

He brought up the Utah Olympic Park in Park City, a destination spot that hosts international and World Cup competitions, and summer and winter sports programs for novices and clubs. It also features three high-ropes courses, a zipline and a drop tower.

“The state is looking to make our sites revenue generators for all seasons,” McKenna said, “and I think ORDA can turn that around.”

Despite being known for the site of the 1932 and 1980 Olympic Winter Games, Lake Placid draws most of its tourism in the summer.

Nevertheless, he said, he wants to know specifics about what the $82.5 million would be spent on, and how the state is using the $62.5 million allocated last year.

“The devil will be in the details,” he said.

ORDA Director of Communications Jon Lundin referred budgetary questions to the state Division of the Budget. The Enterprise reached out to ORDA CEO Mike Pratt, board Chairperson J. Patrick Barrett and board member Art Lussi Tuesday, but they didn’t return calls before Wednesday’s publication.

Many of the upgrades to ORDA facilities in and around Lake Placid will support the winter version of the World University Games in 2023, an event Lake Placid has secured that is expected to draw some 2,500 international collegiate athletes.