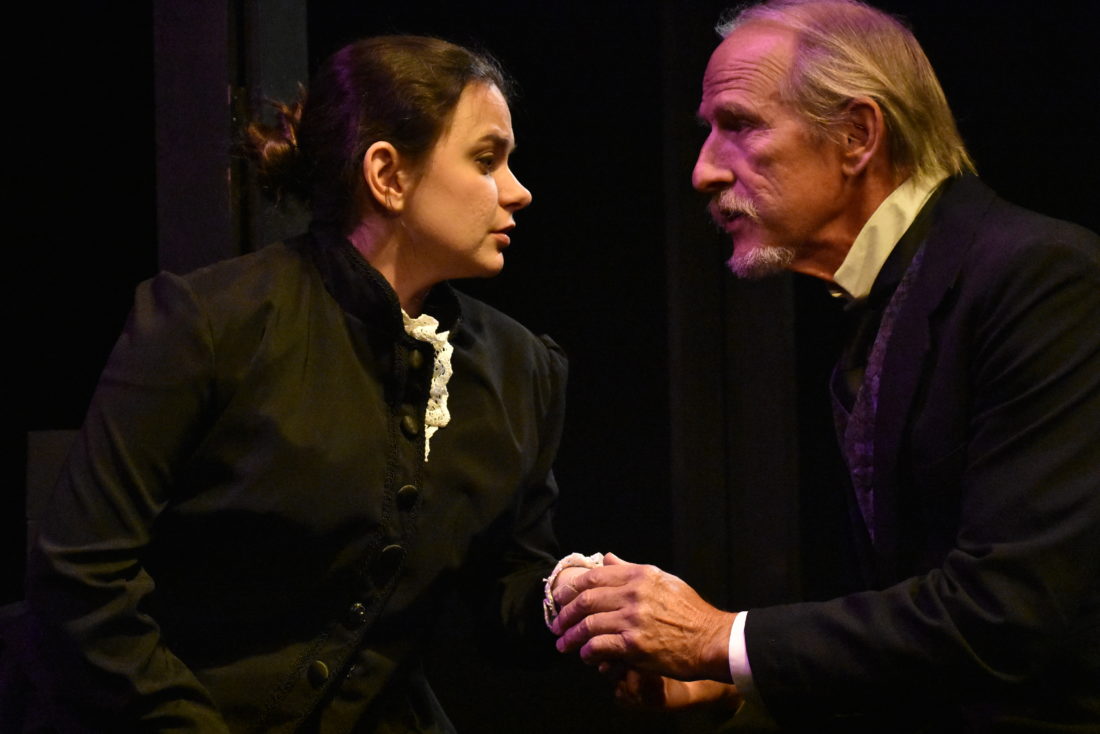 From left, Donna Moschek and Christopher Leifheit star in Pendragon Theatre’s production of Jeffrey Hatcher’s adaptation of Henry James’ Gothic thriller “The Turn of the Screw.” The show runs from Nov. 6 to 18. (Enterprise photo — Griffin Kelly)

SARANAC LAKE — There’s something so intrinsically off about Victorian-era England. It’s as if the queen knew it was going to be one of the creepiest times in the country’s history.

Pendragon Theater will perform Jeffrey Hatcher’s adaptation of Henry James’ Gothic thriller “The Turn of the Screw” from Nov. 2 to 18.

The story is similar to Stephen King’s “The Shining”: A person is hired to watch something while the owner is away, but the job turns out to be much more difficult and spooky than expected. The master employs the governess to watch over his niece and nephew. Flora is a shy little girl who doesn’t speak, and Miles is an antsy 10-year-old who just got expelled from school for vague reasons. Shortly after arriving, the governess starts to notice strange occurrences and entities around the estate. Is it real, or is it all in her head?

“People have been debating the story since it came out,” director Tara Palen said. “Is it a ghost story, or is it a story about a Victorian-era governess gone mad?”

Palen said this adaptation also requires a lot of audience participation and imagination.

The production is minimal. Other than a few chairs and a couple of door frames, the set is black and empty. It evokes a dark and eerie feeling characteristic of writers such as James, Poe and Dickens. Also, the cast, which has five characters, is performed by only two people. Donna Moschek plays the governess while Christopher Leifheit plays the master, Miles and the caretaker, Mrs. Grose. Flora, being mute, is an imaginary child the other characters drag around by the invisible hand.

“We always knew that was going to be a challenge,” Leifheit said. “With a spare set, it makes you more responsible for filling in the imaginative part of it, but we’ve always realized that the third actor would be the light work that Jay (Foster Grover) does. It builds tension, and the stage will go entirely black at certain times. We can only set so much of the mood with what we do and say, but the lighting and the sound are very big parts of this play, too. I like the idea of not working with a big fancy set, and I don’t think either of us finds it to be a problem.”

“The words are also very expressive and descriptive,” Moschek added, “so (James) gives us a lot to work with.”

It’s not just the difference in voice but also the physical mannerism that separates Leifheit’s characters. The master stands tall, speaks slow yet strong, and often looks away from Moschek toward the horizon. Mrs. Grose has a slight bend in her back and keeps her fingers clasped in front of her waist as if they were inside a hand warmer. Miles nervously looks toward the ground when talking and fidgets, constantly rubbing his thighs.

However, Leifheit stays in the master’s proper English gentleman attire for the whole play.

“Chris is quite good at changing his voice and posture that his appearance doesn’t create any issue,” Moschek said.

Palen said other media such as TV and film could benefit from the more experimental and interpretive approaches seen in “The Turn of the Screw.”

“Plenty of independent films can do this well, but I feel like we’re so used to consuming our art and having it thrown in our faces that we’re losing the ability to imagine unless you’re reading a book or seeing a play,” she said. “In a play like this, you’re really forced to get into it, imagine, and come to your own conclusions. I’m anticipating lively debate from the audience.”

What: “The Turn of the Screw”