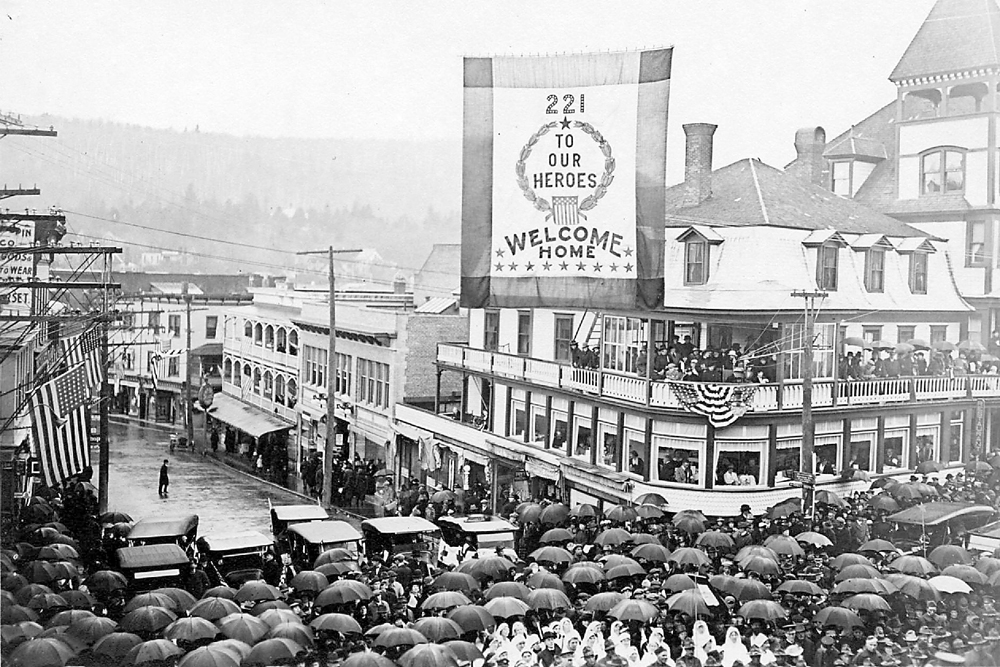 On the 11th hour of the 11th day of the 11th month, the armistice between the Allied Powers and Germany came into effect, signed hours before aboard a train car in the Compiegne Forest in France.

By 8:30 a.m. New York time, the Adirondack Enterprise was shipping bulletins around town — single sheets carrying wire stories from the New York Herald: the war was over. A second bulletin followed at 9:45 carrying more news: the terms of the armistice, Allied prisoners freed, a revolution sweeping through Germany.

This was just over 100 years ago. Copies of these bulletins are still available for viewing in the Saranac Lake Free Library’s archives. Why a bulletin instead of a paper? The Enterprise was not a daily at the time, printed only on Tuesdays and Fridays.

In 1918, the local daily was an evening paper called The Daily Item. When it rolled off the presses at 4:30 p.m. that day, a thunderous bold headline stated: “WAR IS OVER.”

Being an evening paper, it apparently offered advertisers time to rework their marketing material to capitalize on the occasion with adverts like these: 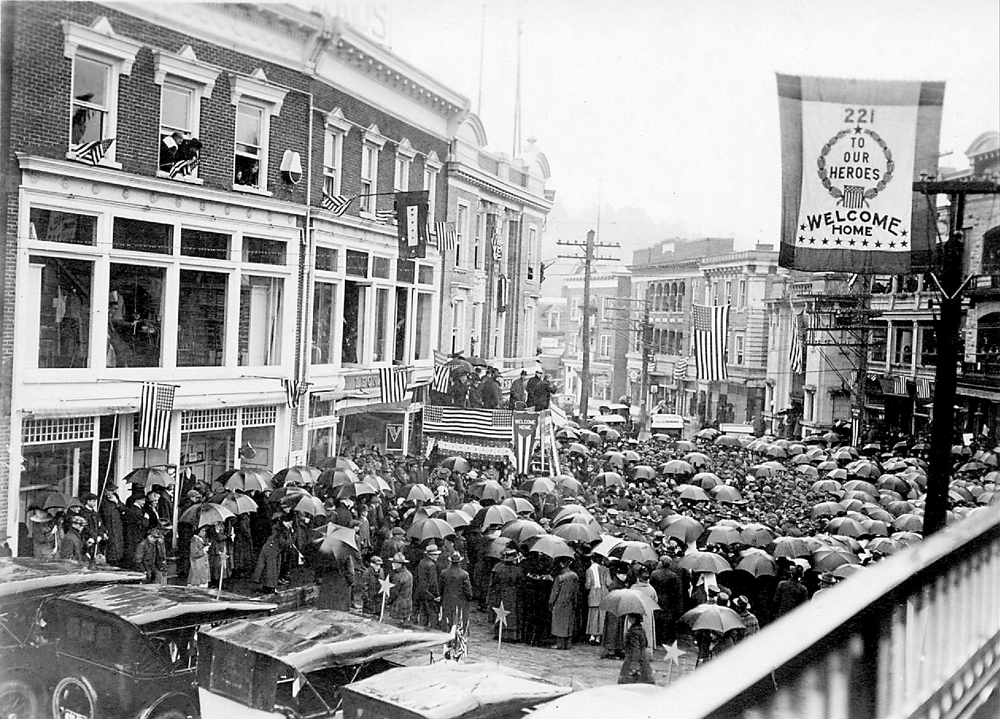 “‘TO HELL WITH THE KAISER’ AND HIS WHOLE FAMILY BUT HAVE YOUR PRESCRIPTIONS FILLED BY MR. GILBERT G. ROBERTS AT EARLE H. FINNEGAN’S PHARMACY.”

“VICTORY SALE OF FURS Just a few days while we are celebrating our Great Victory, we will sell our Furs at COST PRICE. Take advantage of it while it lasts. S. EDELBERG The Northern Tailors and Furriers”

“THE KAISER HAS BEAT IT! But we are Re-treading Just The Same! WASHER’S TIRE HOSPITAL Opposite Town Hall”

At 2:30 that afternoon, more than 100 vehicles set out in a winding caravan from Saranac Lake to Lake Placid. Heading this “peace celebration” was a hearse with a effigy of Kaiser Wilhelm II in the back, “with the intention of getting as many Placidians as possible to return with them for a big demonstration here tonight,” the Item wrote, “the central feature of which will be the burning of the Kaiser in effigy.”

If 100 vehicles on 1918-era roads sounds dangerous to you, well, it was. A car driven by Miss Pauline Hastings, carrying other members of the local Women’s Motor Corps, rear-ended another vehicle, reportedly driving without its lights on. No one was injured.

The weather was written to be “fair tonight and Tuesday. Cooler.”

Elsewhere in the village, celebrations of a different kind occurred. Saranac Lake schools canceled classes soon after the news broke and students and teachers paraded down Main Street. According to Enterprise coverage the following day, the superintendent “was seen walking up Main Street shortly after the parade with a bunch of American flags in one hand and a toy horn in the other — and he didn’t hesitate to blow the horn, either!”

In Bloomingdale, over a bonfire set on the village green, the Enterprise reported that “His Lowness, the Kaiser, was burned in effigy along with the German books of the school.”

That evening in Saranac Lake, the caravan returned with scores of Lake Placid residents. A gallows was constructed beside the Riverside Inn. The kaiser effigy was tarred, hanged and burned before a jubilant crowd of 3,000. The Enterprise reported that music by local bands was drowned out by the cheering.

November 11, which would come to be celebrated as Armistice Day before becoming Veterans Day in 1954, celebrated the formal end of World War I. The war claimed 17 million lives. Of those, 116,000 were American servicemen and 13,956 were New Yorkers.

New York devoted more soldiers to the war effort than any other state, with 500,000 serving. One of those servicemen, a Saranac Lake resident by the name of Dorchester Everett, wrote to his family prolifically from his post aboard the USS DeKalb. His letters are compiled and available for viewing in the library archives. He traversed the Atlantic more than half a dozen times between 1918 and 1919. Between his descriptions of daily life aboard the ship and fretting about Christmas shopping in the French port city of Brest, Everett does not make much mention of the wider war.

Everett does write of his ship’s primary mission ferrying American casualties back home.

“We got a load of wounded aboard,” Everett wrote on Nov. 30 to his father in Saranac Lake. “Some of them are pitiful sights with their arms in cases like, others are wounded in the legs, and some are minus an eye. They are all cheerful but are very quiet acting. This comes from long suffering. Some of them have lost legs or feet, and they all have the look of having suffered a great deal. The Red Cross nurses that tended to them on the barge that brought them out to the ship threw candy to us — I got one piece.”

According to a Historic Saranac Lake exhibit on localwiki.org/hsl, around 300 villagers served some role in the war.

Edward C. Rider, Franklin County’s historian in the early 20th century, spent more than a decade collecting information on local World War I veterans. He completed the project in 1931. Rider’s record lists the details of Franklin County servicemen on the bulk of tome’s time-yellowed pages and devotes space at the end to the local war effort. Rider admits in his foreword that there are some veterans he could find no substantial information on, and others, like Benjamin C. Churco, of which he has substantial details.

Churco, of Tupper Lake, was already a member of the U.S. Army when war broke out. He’d first enlisted in 1913 as infantry but was transferred to the cavalry and stationed on the Mexican border. He was posted on the border until March 1915, when he was injured in a regimental horse race.

After staying in Yellowstone Park for a time, Churco returned to Tupper Lake in January 1916, only to be shipped back out to Mexico with Gen. John Pershing’s Expedition during the fall and winter of 1916 as a private 1-C.

By 1917, when the United States formally entered into the war, Churco’s four-year term had concluded, but he re-enlisted with the Intelligence Services Bureau, arriving in France in August 1917.

Churco died on Aug. 18, 1918, just south of Soissons, France. “A group of four had been sent out to locate Bridge Headquarters, and were caught in a traffic tie-up,” Rider wrote. “A shell from the enemy did its work. Listed under unknown dead as a grave could not be located.”

Tucked away in the annals of Rider’s project is a name of local renown: Dr. Francis B. Trudeau, youngest son of Dr. E.L. Trudeau, founder of the tuberculosis sanitarium for which Saranac Lake would become famous. Francis had taken over his father’s medical practice in Saranac Lake after his father died in 1915. As a captain at U.S. General Hospital No. 16 in Newhaven, Connecticut, he served as a tuberculosis examiner and instructor in the Lung Schools for Medical Officers.

According to Rider’s record, Trudeau examined approximately 17,000 chests in the two years he served. He was discharged on May 1, 1919.

Saranac Lake’s designation as a Home Sanatorium by the Public Health Service resulted in more than 250 ex-servicemen from across the country traveling to the village for treatment after the war’s end. Many of them did not have the funds to support themselves but stayed regardless. Rider wrote that the local chapter of the Red Cross spent more than $3,000 to care for these veterans. Adjusted for inflation, that’s $50,000 in today’s currency.

“The magnitude of this work became too great for the Chapter, so the National Organization undertook to carry on the work,” Rider wrote.

The White Plague, as it was known, is estimated to have killed more than 100,000 people in the U.S. in 1918 alone. The U.S. Army estimates that due to inadequate screening, more than 10,000 American servicemen with tuberculosis were drafted into World War I. Five thousand were diagnosed with TB during the war.

The end of “the greatest war in history,” as the AP reported, brought with it the conclusion of wartime practices on the home front. Among those was the Franklin County Vigilance Committee, organized at the Malone courthouse in January 1918.

Rider lists one of the committee’s notable exploits as stopping a regular gathering of people of German ancestry in Gabriels, who were allegedly “in the habit of meeting at a certain house for the purpose of rejoicing over allied reverses.” The committee, with assistance from the county sheriff delivered an “impressive warning” that the practice was to be stopped. “The mistress of the place,” identified as a Mrs. Calluix by a May 3, 1918, story in the Malone Telegram, “was made to take a picture of the Kaiser from the wall and cast it into the fire.”

Another threat to the American war effort was a “sort of minister of the gospel” who preached too heavily “the idea of pacifism” in the town of Bangor. He was also given a warning by the committee and law enforcement to lay off all the peace talk.

Franklin County Sheriff A. A. Edwards — mentioned above as making women toss pictures into fireplaces — declared in 1918 that pursuant to a proclamation by New York Gov. Charles F. Whitman concerning Chapter 625 of the Laws of 1918, local men had to work.

“During the pendancy of the present war with Germany and its allies every ablebodied male person between the ages of 18 and 50 years shall be habitually and regularly employed,” Rider recorded of the sheriff’s declaration, for at least 36 hours per week. To do otherwise, a man would be “guilty of a misdemeanor and punishable by a fine not exceeding $100, or imprisonment for not more than three months.” Adjusted for inflation, that’s $1,660 today.

Despite mentioning there was no widespread evidence of “slackerism” in Franklin County, Rider does not record whether any men were convicted of criminal idleness.

In early April 1919, the majority of Saranac Lake servicemen who had been serving in Company I, 2nd NY Infantry were discharged and allowed to return home. On April 10, villagers celebrated their homecoming.

“It was a great event, and one that will be remembered for many years to come,” Rider wrote. “A parade was one of the principal features of the day and elaborate preparations were made to dress the village in gala attire … following a touching tribute to those that would never return, a new ‘Welcome Home’ banner was unfurled to the breeze as cheers from the assemblage filled the air.”