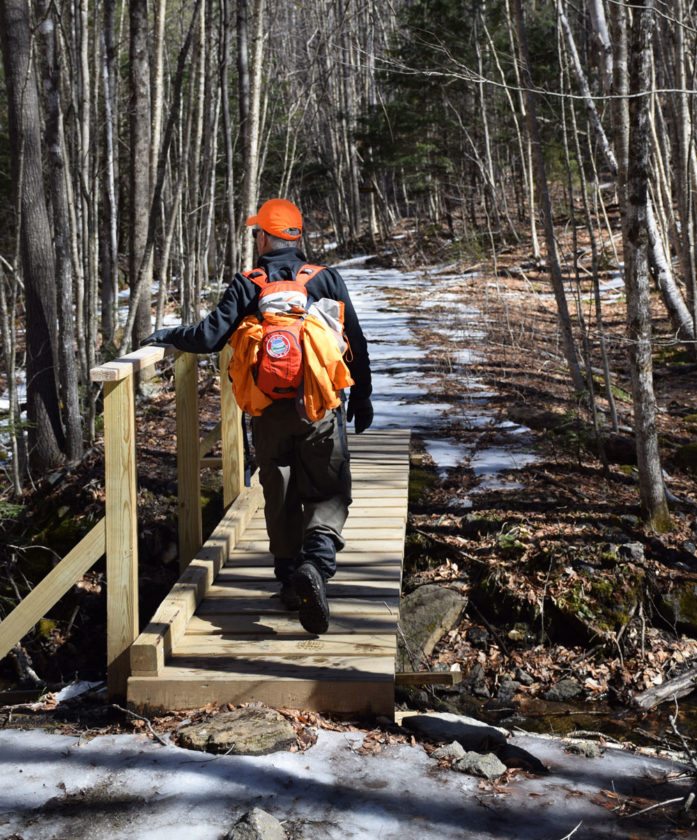 Paul Levine walks on the trail to OK Slip Falls in March of 2016. (Enterprise photo — Justin A. Levine)

A hiker who died on the OK Slip Falls trail near Indian Lake last week suffered “considerable trauma,” according to the Hamilton County coroner.

State police identified 67-year-old Thomas J. Ullmann of New Haven, Connecticut, as the man who was located late Friday night after he failed to return from a hike. According to police, Ullmann had left his seasonal residence in Olmsteadville for the hike early on Friday and was reported missing at 5:30 p.m. that day.

An autopsy was performed Monday at Albany Medical Center.

“There was considerable trauma to the head and neck,” Coroner Virginia Jennings said Monday afternoon. “Conditions in the area that he was in were quite slippery.”

“Forest rangers responded and located tracks believed to be left by the subject,” the DEC wrote in its weekly roundup of forest ranger actions. “At 11:03 p.m., forest rangers located Mr. Ullman[n] deceased on a ledge part way down a gorge wall.

“At the request of State Police, the coroner authorized rangers to recover the subject and transport him out of the wilderness. With the temperature dropping and icy weather moving in, rangers worked overnight utilizing high angle rope techniques to complete the recovery.”

DEC said Ullmann’s body was turned over to the coroner Saturday morning.