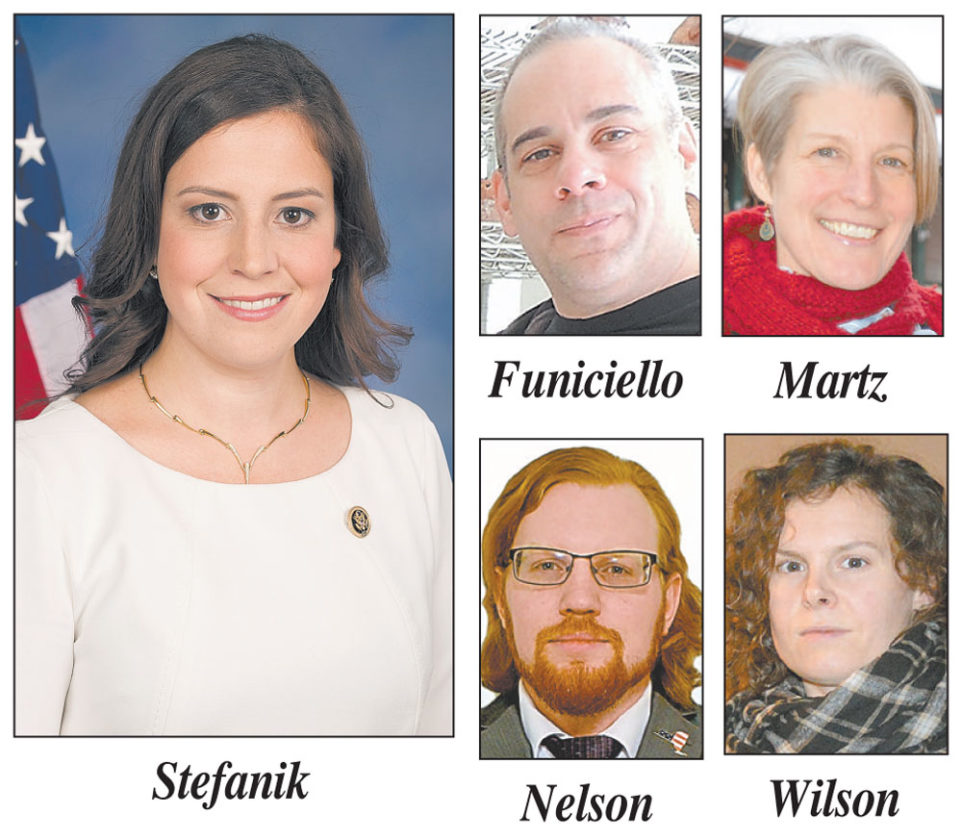 SARANAC LAKE — As North Country Rep. Elise Stefanik voted in favor of the polarizing American Health Care Act Thursday, numerous potential challengers mull whether now is the right time to throw their names into the arena against her in 2018.

Stefanik’s Democratic opponent in 2014, Aaron Woolf of Elizabethtown, said he currently doesn’t plan to run again, but he said numerous people have picked his brain on what it takes.

Woolf was the keynote speaker at a summit last month at Paul Smith’s College. At the April 8 event, members of more than 60 Democratic, liberal and progressive groups hatched since the election organized and shared ideas.

Woolf criticized the AHCA, which if it passes the Senate and president would replace the Obama-era Affordable Care Act, and said he believed Stefanik’s vote in favor could be a burden on the sophomore congresswoman in the 2018 campaign.

“I think it could be really a political vulnerability for any legislator who chose to support this,” Woolf said. “Not only do I think there will be many more people considering running for office, but doing things such as participating in meetings, showing up and understanding that their political choices, even in a small town in rural New York, have consequences. It’s exciting, the way the political energy is. It’s something I’ve never seen before here. It makes you want to step up and do things like run for office.”

Through the first 100-plus days of Donald Trump’s presidency, Democrat Patrick Nelson, a 27-year-old former Bernie Sanders delegate from Stillwater in Saratoga County, has been the only active challenger to Stefanik touring the district.

But Tri-Lakes residents who have been embedded with the new grassroots efforts may soon be joining him, as well as potential candidates from outside the area.

Nelson said Friday he received more donations in the past two days than any prior month-long span. This included $3,000 in the 24-hour period following the AHCA vote, with an average contribution of $37.

“Part of the thought of the early start was this moment,” Nelson said. “It’s the reason why we did two health care videos. We wanted to be involved in conversation as it was happening. It’s why we wanted to start early — to stay on these issues and evolve with them.

“Plenty of people are talking about it,” Nelson said of other Democratic challengers. “That’s all well and good, but I do think the time to start was the time we started, for this reason.”

One potential candidate is Katie Wilson of Keene. Wilson, who is in her early 30s, grew up in Keene and owns and operates Adirondack Attic, a consignment and antiques store on state Route 73.

In recent months, Wilson has been a leading critic of Stefanik in the Tri-Lakes area, including organizing and attending a protest of Stefanik outside of the Crowne Plaza in Lake Placid in February. She also organized a group of 15 people last fall who protested the Dakota Access Pipeline by sitting in at Plattsburgh branches of banks that helped fund the pipeline.

“I’m considering running because Elise Stefanik has no idea what a North Country winter is like,” Wilson wrote in an email Friday, “what our heating bills cost or how important winter tires are, not to mention a reliable vehicle.

“We need a representative who’s willing to fight for the North Country, one who listens and understands the district because they are invested here. We need people creating policy in America who have lived authentic lives, because representation should come from the people, not from the ‘bred and groomed for Washington’ insiders. I’m considering it because I’m invested in the bright future of the North Country.”

Another local woman who has stood side-by-side with Wilson at some rallies, Emily Martz of Saranac Lake, said Friday that she plans to run for office but is not sure if it will be at the congressional level or more local.

Martz is the co-founder of Now What?, one of the progressive grassroots groups that sprouted since November. She also was a lead organizer of the Paul Smith’s College summit.

“I’ve had conversations and still remain a very active citizen who is concerned about my representative,” Hewitt said.

The Green Party’s challenger to Stefanik in the past two elections, Glens Falls bread baker Matt Funiciello, criticized Stefanik’s AHCA vote Friday and said he remains unsure if he will run in 2018. He reiterated that he expects a primary between multiple Green candidates and added that he’s heard as many as six candidates from varying parties are “mustering together resources to run.” Funiciello also said his 2014 and 2016 runs left less time for his business, something he’s focused on since the election.

“I think I would be a great congressional representative,” he said, “but the reality is I might not be a great candidate. I like to tell people the truth, and most people don’t like to hear that. So we’ll see who comes out of the woodwork when signature time comes.”

“She had problems with the first (AHCA) bill. She said it publicly, and people gave her very little credit for that,” Scollin said. “She was pragmatic in the end and knew the ACA was failing.”

That said, Scollin was critical of Republicans overall as he said the AHCA vote demonstrated “just how polarized our U.S. House is.

“I’ve never seen anything like this,” he said. “This is beyond bizarre, the way things are unfolding.”

“The Republicans in the House had to get something through the House to allow the Senate to get a crack at it,” Scollin added. “The Senate, I feel, is also polarized to a point, but not close to as polarized as the House is. The Senate will offer a more mature debate and allow any bill they come up with to be seasoned. People can look at it, take a look at it properly. When that happens, they may come out with something that works.”