Jesse Cutting of Paul Smith’s College competes in the single buck event in Saturday’s Northeast qualifier, with a trip to the collegiate timbersports national championship on the line. (Enterprise photo — Lou Reuter)

Emily DeYoung of the Paul Smith’s College Bobcats competes in the stock saw event Saturday while earning a berth in the women’s timbersports national championships that will be held in October. (Enterprise photo — Lou Reuter) 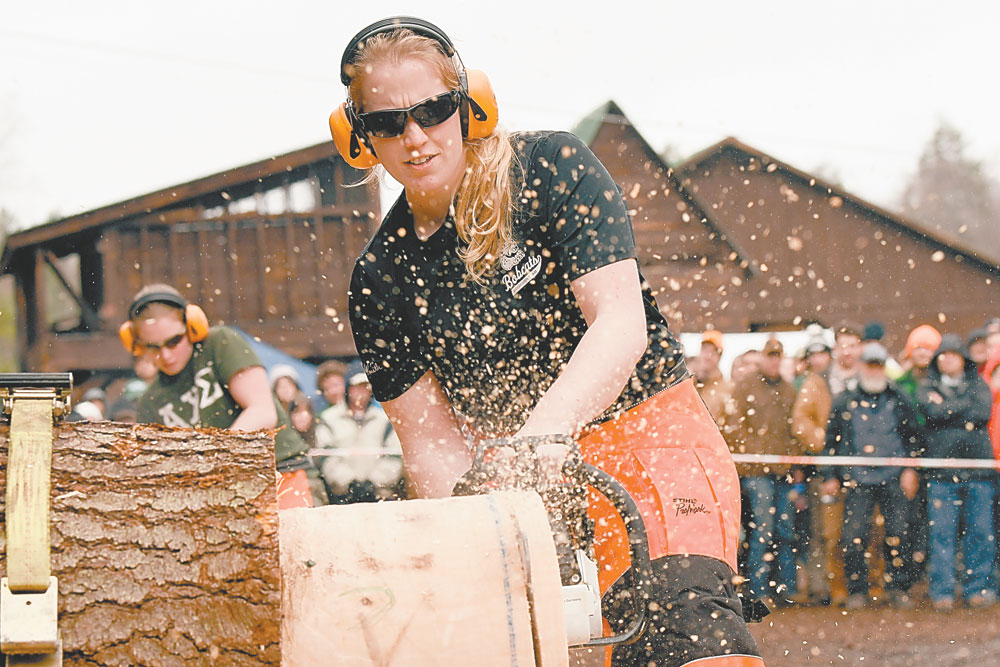 Emily DeYoung of the Paul Smith’s College Bobcats competes in the stock saw event Saturday while earning a berth in the women’s timbersports national championships that will be held in October. (Enterprise photo — Lou Reuter)

PAUL SMITHS — Over the weekend, the Paul Smith’s College woodsmen’s team accomplished a feat that’s never been done in the 71-year history of the Spring Meet Conclave, which is the biggest collegiate timbersports competition in the United States.

During two days of action on Friday and Saturday that included 19 disciplines, the Bobcats pulled off a first on their own campus as they swept the men’s, women’s and mixed Jack and Jill titles.

And the Bobcats woodsmen didn’t stop there. On Saturday afternoon in the final competition of the day, Paul Smith’s student-athletes Emily DeYoung and Jesse Cutting took top honors in the Stihl Timbersports Northeast Collegiate Qualifier to earn a trip to the men’s and women’s national championships, being held in Connecticut and Wisconsin later this year.

The meet featured teams from 14 colleges from across New York state and New England — some 350 timbersports athletes from the likes of SUNY College of Environmental Science and Forestry, Dartmouth, University of New Hampshire, Colby, Unity, Connecticut and the University of Vermont.

A year ago when the meet was held at Alfred, the Paul Smith’s Jack and Jill Team took first place with the men and women finishing runner-up. They cleaned the table this time around. 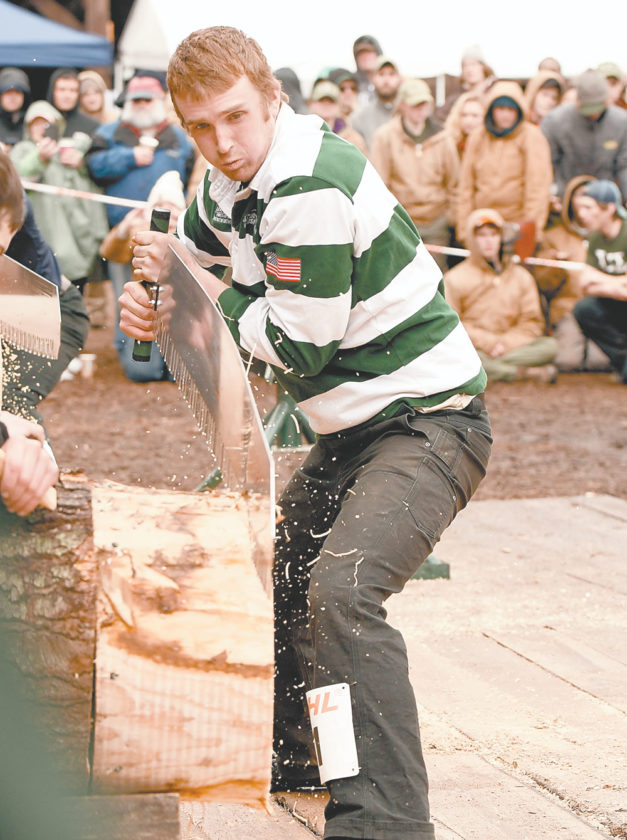 Jesse Cutting of Paul Smith’s College competes in the single buck event in Saturday’s Northeast qualifier, with a trip to the collegiate timbersports national championship on the line. (Enterprise photo — Lou Reuter)

“This is probably the most solid team we’ve ever had here,” said coach Brett McLeod, who is also a forestry professor. “These students get unlimited wood to chop here at Paul Smith’s, and they train five, six days a week.”

In Saturday’s men’s Northeast qualifier, contestants were timed in four disciplines — the underhand chop, single buck, stock saw and standing block chop — and earned points based on their speed. Cutting, a senior from New Hampshire, was battling for the top spot with Ethan Hall of SUNY ESF, who made it all the way to the national collegiate championships a year ago. Cutting trailed Hall by two points going into the last event, the standing block chop, and grabbed the win by being the fastest competitor to complete the discipline.

Cutting, as well as the rest of the field, then had to wait a good 10 minutes until the points were tallied in the extremely close contest before the results were announced. Cutting was sitting on a log among teammates while waiting for the announcement, and when he was declared the winner, he beamed a sigh of relief while receiving a flurry of hugs.

“It was a lot of fun. Ethan won it last year,” Cutting said. “We’ve been competing back-and-forth over the past year just in meets in general. I think it helps the sport to have this kind of competitiveness. We’re hyper competitive, and that’s what makes it fun. I think that’s great for timbersports.

“They only give out a couple of wild-card spots for the national championship, so winning this, and here especially in front of everybody, is really special,” Cutting added. “It’s been a long couple of weeks setting everything up for this meet, but looking back now, it was really worth it.”

“That men’s contest was pretty amazing,” McLeod said. “All Ethan’s teammates know that if he has one thing, it’s grace under pressure, and he’s able to turn it on and pull out the win. It was great to see.”

The women’s qualifier was a three-discipline contest, with the same events as the men excluding the standing block chop. And DeYoung made a statement right off the bat by finishing the underhand chop in 37 seconds, which was nearly a half-minute quicker than her next closest rival.

DeYoung’s underhand chop time was also the third-fastest in the world on the diameter and species of wood used in the competition, McLeod said.

A year ago, DeYoung was in the running for a possible win in the qualifier but was disqualified on the stock saw event. On Saturday, she wasn’t the fastest to chainsaw two cookies off the log, but she finished the discipline to earn points and then sealed the title on the single buck.

“I actually DQ’d on stock saw a year ago but I held it together this time,” DeYoung said. “Even during the captains meeting they were talking about DQs. It was in the back of my head the whole time but I made it through.”

DeYoung attributed her win in part to all the support she was surrounded by.

“All my family and friends keeping me calm and telling me how proud they were of me really helped me do well,” she said. “It helps having people like that around.”

“I practiced seven days a week as much as I could around classes, come up at night and practice with the lights on,” she added. “The way to win it is have a good mindset going in. You can be the strongest chopper but as soon as your brain isn’t there, it’s not going to happen.”

The team competitions included 19 disciplines, and the Bobcats men took first place in 12 of those to top a field of 15 squads. Paul Smith’s scored a first-place total of 1,818.1 points, with the SUNY ESF team finishing runner-up with 1,603.7 points. The Bobcats men’s second team took fifth with a 1,314.7 total.

Eight teams were entered in the women’s event, and the Bobcats won with 1,619.7 points. They won eight competitions. Colby College placed second with 1,582.3 points.

In addition to praising his team, McLeod said both DeYoung and Cutting are a cut above your normal college kids.

“I can tell you the thing that I’m really proud about is I have both these students in class,” McLeod said. “Not only are both outstanding students and scholars, but they are also amazing athletes and woodsmen too. All around, they are really really impressive.”

Cutting will compete in the Stihl collegiate championships in July in Milwaukee, Wisconsin in an event that will be aired on ESPN and ABC. A year ago as a Paul Smith’s senior, Bill Adams went on to win the competition after earning his berth in the event through a wild card slot after was unable to triumph in the northeast qualifier.

“It was pretty nerve-racking. I knew it was going to be close,” Cutting said. “Either way I was pretty happy with the day. I cut well; I cut well enough to win. Even if I didn’t win, I wouldn’t have felt too bad losing because I didn’t make mistakes. It was just shock when I won it. I was glad everyone was able to be here to see it. It was a fun moment.”

DeYoung will compete in her national championship in October in Connecticut.