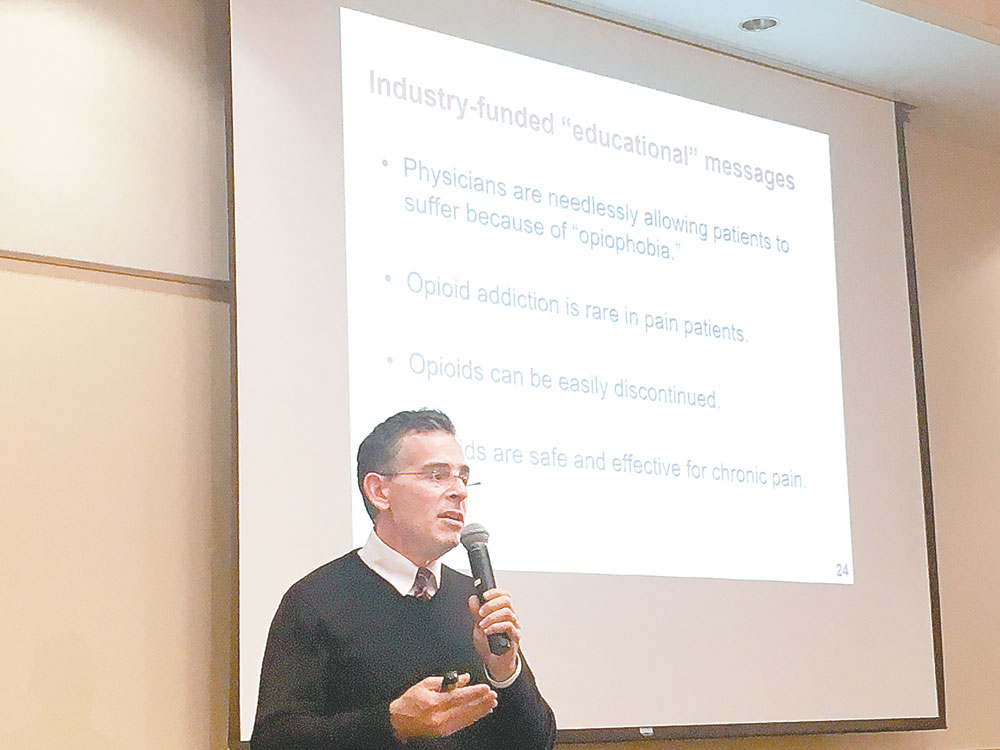 Andrew Kolodny, an expert on the heroin and opioid epidemic, speaks at a forum on the issue at the Conference Center at Lake Placid Friday that was attended by many local doctors, dentists and educators. (Enterprise photo — Antonio Olivero)

LAKE PLACID — Speaking to a room full of doctors, dentists and educators about the heroin and opioid epidemic at the Conference Center at Lake Placid on Friday, Andrew Kolodny provided statistics and studies during his 90-minute keynote speech. But to put in perspective just how large the scope of heroin and opioid addiction has become in this country, Kolodny brought up, of all things, the Super Bowl.

It was during the second quarter of the NFL title game on Feb. 7 when a black and white advertisement lectured Americans about something called “opioid-induced constipation (OIC).” For one minute, with more than 114 million eyeballs fixed on their commercial, the eighth largest drug company in the world, AstraZeneca, asked viewers taking opioids to “have the conversation with your doctor about OIC and ask about prescription treatment options.”

“Opioids block pain signals, but also can block activities in the bowel,” the advertisement’s narrator says, “which is why it can feel like your opioid pain med is slowing your insides to a crawl.”

At Friday’s forum, entitled “Responding to the Prescription Opioid and Heroin Crisis: An Epidemic of Addiction,” this was the keynote speaker Kolodny’s way of explaining just how much chronic opioid use and addiction has infiltrated the everyday lives of millions of Americans.

A staunch critic of the tactics of pharmaceutical companies, Kolodny estimated 10 to 12 million Americans use opioids chronically. He pointed the blame for the epidemic on the marketing and advertising efforts of pharmaceutical companies to doctors. With slide after slide, Kolodny explained how he believes the epidemic is the manifestation of irresponsible prescription practices by doctors in situations where opioids are more likely to harm than help a patient.

“Unfortunately, the bulk of the prescribing in the United States is not for end of life care or used a couple of days after major surgery,” he said.

Kolodny is regarded as one of the premier experts on the crisis, as he is the chief medical officer of Phoenix House. He is also a senior scientist at the Heller School for Social Policy and Management at Brandeis University. There, he researches prescription drug monitoring programs, and he also works as the executive director of physicians for Responsible Opioid Prescribing.

He spoke twice in Lake Placid Friday, and for event organizer Tina Clark, the CPP coordinator of the Lake Placid-Wilmington CYC, Kolodny was the kind of nationally-recognized expert ideal to inform Tri-Lakes medical professionals.

His keynote speech to a larger group then took place between 7 and 8:30 p.m., following an hour-long, free training session on the opioid overdose blocking medication naloxone, also known by its brand name Narcan. Attendees received the overdose nasal and injection rescue equipment in a small, pencil-case-type zipped pouch. Heroin and opioid overdoses are now the leading cause of accidental death in the state.

The focus of Kolodny’s keynote speech was to explain how he believes the epidemic began around the year 1996 due to the increased promotion of drugs such as Oxycontin to doctors. Kolodny explained how promotional spending for Oxycontin in 1996 was just less than 10 million, and exploded to nearly 30 million in 2000 and 2001.

“The effects that oxycodone and hydrocodone produce in the brain are indistinguishable from the effects produced by heroin,” he said. “An experienced heroin user who self administers Oxycontin or heroin — there was a study done at Columbia University. The heroin user couldn’t tell one from the other. And when they were asked which one they liked better in a blind test, the heroin users preferred the effects of the oxycodone.

“So, what is my point? Kolodny asked the crowd. “When we talk about opioid pain medications, we are essentially talking about heroin pills.”

Among the many statistics Kolodny showed via his slideshow presentation, the numbers included how more than 50 percent of heroin treatment admissions are for non-hispanic whites compared to less than 5 percent African Americans. He also explained to attendees how the consumption of oxycodone in New York state has grown from less than one million milligrams per capita in 1996, to more than six million in 2002, to more than 16 million in 2006.

He criticized the pharmaceutical industry for funding educational messages to doctors that he disagreed with, about how opioids are not addictive for the vast majority of patients who take them and that people can easily come off them.

One of the medical professionals in attendance was David Balestrini of Lake Placid Family Dental. The dentist said he prescribes the opioid Percocet sparingly, several times a month to patients who have gone through more painful operations. He added, though, that he is cognizant of those coming to his office just to take home drugs.

“I don’t see a lot of it, but you definitely get drug seekers and they are hard to pick out,” he said.

“The statistics were stunning,” he added, “when you see in the United States we are the No. 1 worldwide consumer of narcotic medications, and there was a marketing campaign by the drug companies to get physicians to prescribe narcotic pain medications — opioid pain medications — because we were under-treating pain. And, of course, there is a dollar value that goes to the pharmaceutical companies.”